This tip is a synopsis of the VS Live Conference held in Washington D.C. in June 2017 written by Lib Grimes who was the winner of the conference registration and $1000 USD of travel expenses.

The VS Live conference has sessions under 8 groupings consisting of ALM/DevOps, Cloud Computing, Database and Analytics, Native Client consisting of mobile and universal windows apps, Software Practices, Visual Studio/.NET Framework, Web Client, and Web Server technologies consistent with the trends in the industry today. Common themes at the conference were mobility, cloud, platform agnostic tools, and a focus on tools to enhance the time to market on developing software applications.

The keynote presentation consisted of a demo of Microsoft PowerApps which is marketed as a productivity framework, low-code tool that delivers apps that work on mobile devices. PowerApps is intended to speed up custom development to bring software to market more quickly and with less cost than traditional development as it houses a dashboard look default main page where you add in data connectors. The tool comes with many pre-built SAAS connectors to many popular software packages but also connects to any custom Rest API. It uses an Excel syntax for querying over data and is intended so that a power user of excel and power point can utilize it as well. Also shown was Microsoft Flow, which is a workflow service that runs on Azure that is intended to be used by being triggered upon certain events. PowerApps and Flow are intended to be replacements for SharePoint Forms and workflows. 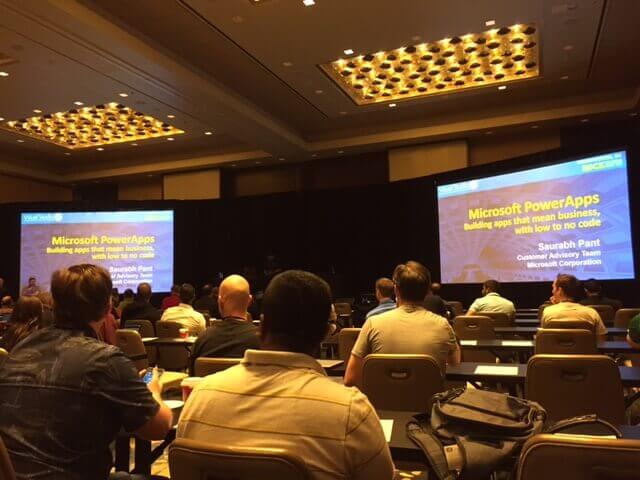 Under the Native Client category, the session on Go Mobile with Xamarin, showed how to setup projects with Xamarin using both Xamarin forms, which are intended for mobile apps with little platform specific needs to Xamarin platform which is intended for iOS and Android platform specific code needed to integrate with the battery, GPS, lights, notifications, Settings, etc. on the mobile devices. The applications used the MVVM or Model View View Model architecture to accomplish the view displays on the various mobile platforms. Xamarin Forms contains custom renderers that deliver device specific content.

On the Database and Analytics tracks, the session on DocumentDB gave an overview of how a non-sql database works with comparisons drawn to relational databases to make it easier to comprehend. For example, rows in a relational database corresponds to Documents in a non-SQL store and columns are equivalent to properties. A document database is schema free, typically denormalized, and has eventual consistency. A use case for a using a document database over a relational would be when all the attributes of a model differ from the base, for example, with all the special features on different brands of cars, instead of defining a table that could list every possible feature from every manufacturer, you would just store a document that contained only the applicable features for each manufacturer. The session on Database Lifecycle Management reviewed how to use tools on the database side to track changes similar to how Git change control is used on the coding side of developing applications. Recommendations were made on using a tool such as SQL Server Data Tools, SQL Lighthouse and DLM Dashboard by Redgate for this purpose. The sessions on analytics gave a demo on how to use Microsoft’s Power BI dashboard generator tool for real time BI reporting.

The Microservice Architecture session under the Software Practices category, reviewed the use cases for setting up workflow coordinators, the service bus, and their services. It also talked about how tools such as Docker containers, Azure functions, and Amazon Lambda expressions help you to setup microservices architecture. Auto-deployments are also a requirement for building microservices.

Under the Cloud Computing track, the session on Docker demonstrated the power of the open source containerization platform by creating a container to run your database SQL Server on a Linux box in one container while running your web server on a Windows box in another container, both running on the same VM. The portable application package allows for a consistent, predictable, and ready to use hosting environment. Container clusters also have load balancers built in. This technology allows for faster deployments since it isolates specific applications eliminating the reliance on different versions of software.

The session on .NET Core demonstrated how everything in the Core platform is an add-in and needs to be turned on in order to be used. This was done to increase the performance of the .NET platform as it is a full re-write of the .NET Framework. Its flexible deployment model can run on Windows, Linux, and MAC. A demonstration was given showing how to setup a .NET Core application. .NET Core references an ASPNETCORE_ENVIRONMENT variable to determine the run-time environment, the default options are Development, Staging, and Production.

Overall, there were a wide-range of technology topics. Many of the new technologies were created to alleviate pain points in current and past development that delayed or caused system level issues when deployed.