In the first two parts of this tip, an implementation of a slowly changing dimension of type 2 was suggested with SQL Server Integration Services. This design only uses out-of-the-box components and is optimized for performance. However, the initial design can be optimized even further. Part 3 introduced hashing to efficiently detect changes. In this part, we’ll take a look at intra-day changes.

Before you read this tip, it is advised to read part 1, part 2 and part 3 if you haven’t already.

There are three optimizations possible in the design of the SQL Server Integration Services SSIS package:

In this final part, we’ll introduce a solution for dealing with intra-day changes. The first two optimizations were covered in part 3.

What exactly is an intra-day change? When you run your ETL batch load multiple times in one day, it’s possible that a type 2 attribute (see part 1 for an introduction on the different types of slowly changing dimensions) changes multiple times in that same day. Ideally, you only need the last value of the day stored in your dimension. In this part of the tip, we’ll look at how we can enhance the pattern of loading a slowly changing dimension type 2 to deal with this scenario.

So, what is exactly the problem with changing a value multiple times a day? Let’s illustrate with an example. Suppose we have the following row in the dimension table:

Suppose a new comes in from the source, where the location has been changed to New York, on August the 6th. This would result in the following data in the dimension table:

Remember the new ValidFrom field value is GETDATE() -1 and the ValidTo field of the previous version is set to ValidFrom of the current row minus one day.

For some reason, the location changes again on the same day to Delhi. Maybe someone made a mistake and corrected it, or it is just possible that the data can change multiple times a day. Coincidentally, the ETL also runs again on the same day, picking up this new change. The ValidFrom date will again be the 5th of August:

And this is where the trouble starts. For the second version, we have a ValidTo value that is before the value of the ValidFrom field in time. If there’s a unique index on the CustomerName and ValidFrom columns, an error will be thrown because the unique constraint would be violated, since the 2nd and 3rd version have the same values for those fields.

There are a couple of reasons why the ETL would run multiple times a day:

Whatever the reason, running an ETL job multiple times a day can have unintended consequences, especially when loading slowly changing dimensions. You need to be prepared to handle those scenarios. There are two possible solutions:

Let’s modify the data flow we created in the first three parts of this tip. The trick is checking if a type 2 change is an intra-day change before we sent the row to the OLE DB Destination to be inserted into the dimension.

First, we need the ValidFrom value from the current record, which we retrieve in the Lookup component. Its query becomes:

Now we use a conditional split to check if the new ValidFrom value is equal to the old one: 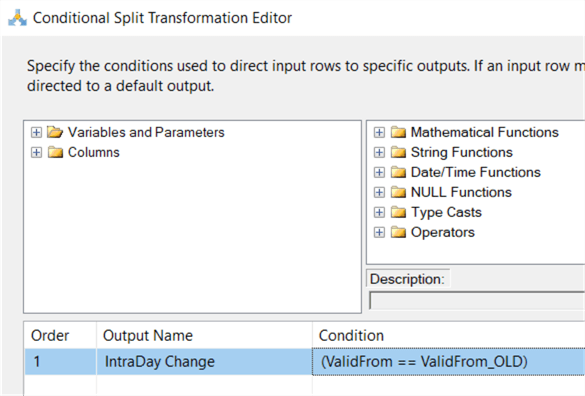 If there is such a change, we flag the record using a new field which is added by a derived column transformation:

The records having an intraday change are then merged with the type 1 changes:

After the UNION ALL, we set the IntraDay flag to 0 if it is NULL (these are the records with only a type 1 change).

Now we have almost finished modifying the data flow, but first we need to adapt the table holding the type 1 updates. It needs an extra column to hold the IntraDay flag, but it now also needs to store the Type 2 attributes. We’re also going to store the surrogate key of the current version to optimize performance of the UPDATE statement. It’s DROP and CREATE TABLE statement becomes:

Don’t forget to update the mapping for the OLE DB Destination component!

The data flow now has the following layout: 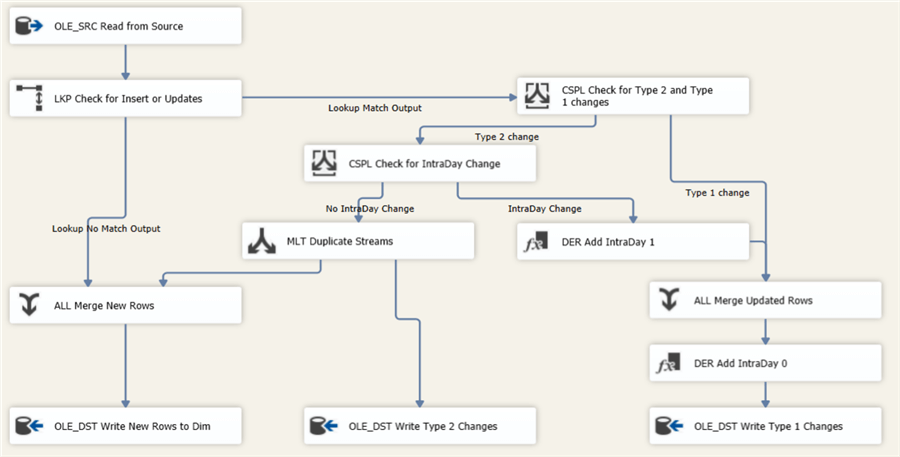 The last step is to add an extra UPDATE statement to the Execute SQL Task in the control flow:

Let’s test our solution. First, we change the location in the staging table to New York and we run the package.

Then we change the location to Delhi and then we run the package again.

As you can see, the location New York was replaced with Delhi.

In this final part of the tip on slowly changing dimensions, we discussed how you can handle intra-day changes inside the SSIS package. The result of this change is that only the last value of the day is kept, while all previous values are discarded.