Example of Using Python with T-SQL

A large volume of data manipulation tasks are generally preferred to be done in T-SQL. As we discussed in the first lesson, it would make sense to leverage Python for special tasks like statistical computing, machine learning, natural language processing, etc. Consider a use case where we need to calculate statistics of quantitative data from a table stored in a sample database hosted on an instance of SQL Server 2017. Preliminary data analysis and exploration for machine learning generally starts with descriptive statistics. For the same calculation of basic numeric parameters like mean, median, quartiles, etc. Charts like Histogram, Scatterplot, and Boxplots, etc. are analyzed side by side with these statistics.

Our intention is to learn how to derive these statistics using T-SQL and R for a quantitative and voluminous data stored in a SQL Server table.

We already saw use of this procedure in the previous lessons. Below is an explanation of the syntax. You can read more details about its use from here. Some points to note about the use of this command: 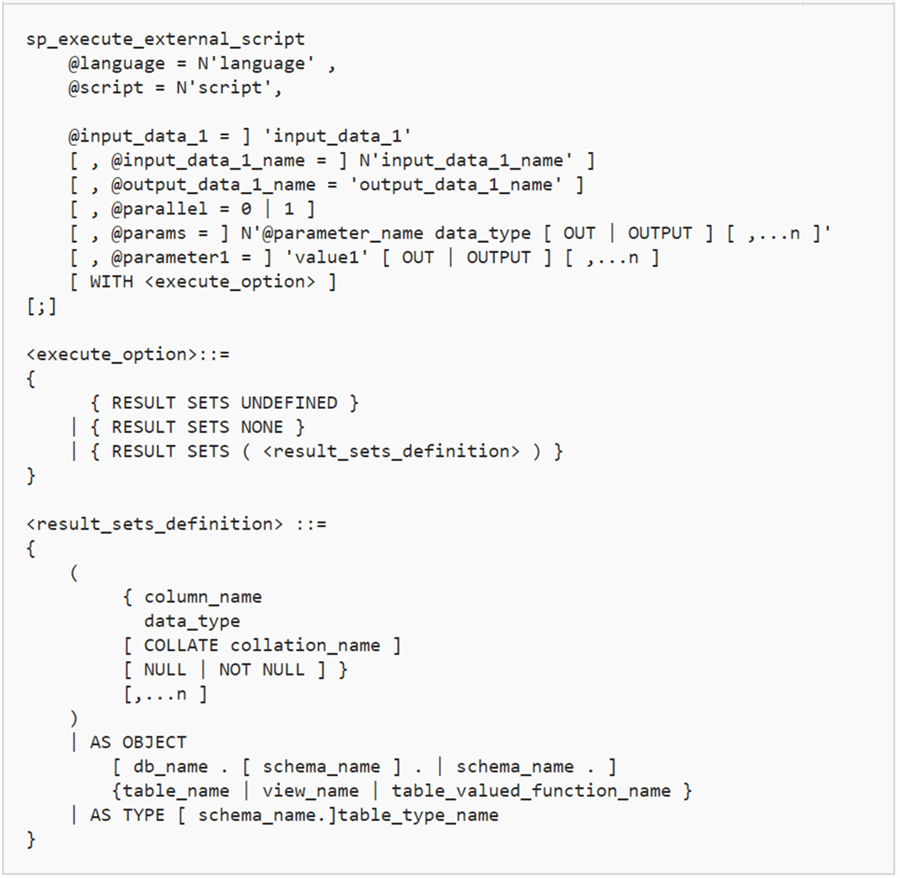 Data Exchange between Python and T-SQL

Let’s try to understand the above points by means of an example. Let’s say that we have the sample AdventureWorks data warehouse. Fact tables generally hold quantitative data and dimensions tables hold qualitative data. So naturally fact tables are a good fit for statistical analysis. The most relevant numeric data would be related to sales in the AdventureWorks DW database.

Consider a use-case where we want to calculate basic descriptive statistics of fields holding numerical values with a minimal amount of code and complexity. To do so, we would pass our data to Python for calculations and would be fetching the calculated output out of Python into T-SQL. The FactInternetSales table contains more than 60k records related to sales data. With a single line of code in Python we can calculate all these statistics as shown in the below example. Let’s understand what this example does and how data in exchanged between Python and T-SQL. 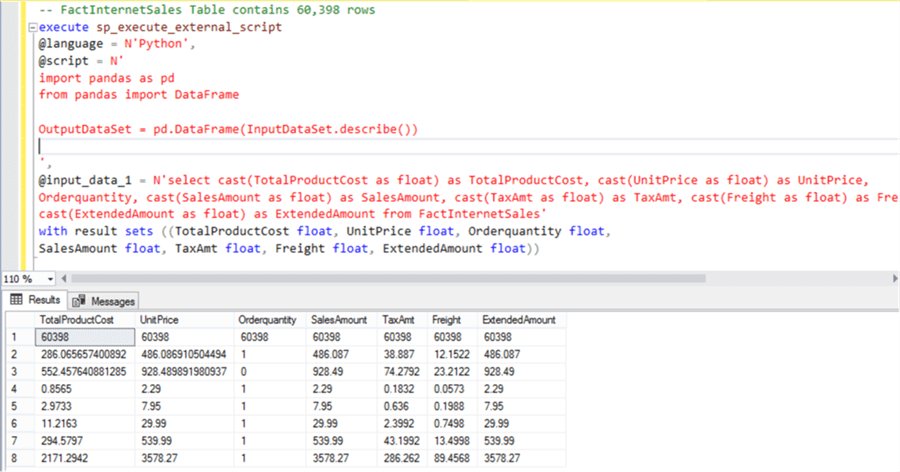 The end output is the calculation of count, mean, standard deviation, min, max and quartiles like 25%, 50% and 75%. The formula and significance of these statistics is beyond the scope of this tutorial. These are very basic calculations and those dealing with data analysis and data science would already know this. Those who are new to these formulas can search for them on Wikipedia and you should be easily able to find a lot of free information on each formula.

Here our intention is just to demonstrate how we can calculate all these statistics with a single line of code in Python. Consider achieving the same output in T-SQL and then you can assess the complexity of the implementation in T-SQL versus Python.

Now that we understand how the statistical power of Python can be applied to datasets fetched from SQL Server data repositories using T-SQL, the next logical step is to derive some insights about data using visualizations. Let’s move on to the next lesson.