We now know how to query numerical data – whether decimal, integer or varchar with possible numbers – to look for numbers or ranges of numerical values.  What if we want to check if a data row begins with a number and also has another combination of numbers as well?  What about decimal precision, such as getting all the data with up to four decimal places, or three?  In the latter query, we will use special characters alongside numbers, which we’ll look at in these next set of examples.

Suppose that we wanted to get all numerical values from the column NumData that start with either a 2 or 3 and have any other character following it, but also have a 1 or 5 somewhere else in the data.  We would use the [2-3] range followed by the any option % with the next set of numbers specified [15] followed by another any option %. 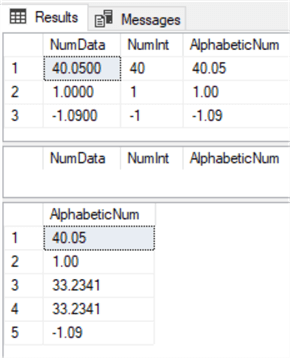 Results from second set of queries.

As we see, the second query returns nothing, as no AlphabeticNum column has three decimal places that meets this requirement.  Developers tend to round up or down, which may not matter in some situations, but be careful about this.  Sometimes this can be costly, so using techniques like this can help us when we’ve obtained data from an ETL source and we want to validate decimal length.

What if we want to return all negative data?  We can apply regular expressions using the special character for the negative symbol [-] and find all the values, whether decimal, integer or varchar that lead with a negative.  In the case of varchars, we may have a leading negative symbol with words, so we could add additional filtering such as [0-9] to ensure the following data are digits, as decimals and integers will prevent alphabetic characters in general. 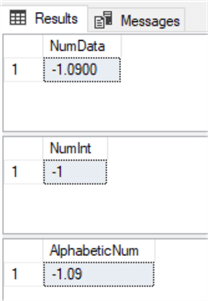 Results from third set of queries. 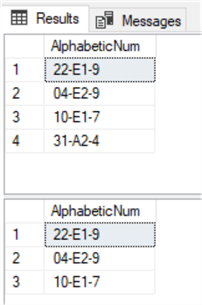 Results from four set of queries.

In some cases, identifiers will use all three types of characters: numbers, alphabetic, and special characters, though sometimes we only have two of the three.

Up to this point, we’ve covered numerical regular expressions by showing:

In the final section, we’ll look at other special characters, the not symbol with regular expressions, and applying some of these in business situations.