You'll hear this term instance a lot when referring to the SQL Server suite of products.  Whether it's the database engine, Analysis Services, Reporting Services or Integration Services when someone refers to an instance of the product this basically means a copy of the executable that is running as a Windows service.  For the database engine this is sqlservr.exe, for Analysis Services it's the msmdsrv.exe, for Integration Services it's the MsDtsSrvr.exe and for Reporting Services it's the ReportingServicesService.exe.  As far as the architecture goes that is where the similarities between the different products ends.  The below sections will give an overview of the rest of the architecture for each of the main products.

The engine of the instance can be broken down into two parts. The Relational Engine and the Storage Engine.

The Relational Engine handles the execution of queries as they are received from client applications.  This engine has the following components: Query Parser, Optimizer/Planner, and Executor.

The Storage Engine handles the actual accessing of the data as requested by the query executor.  Within this engine there is a transaction manager and buffer manager which interact with the data and log files to select/insert/update/delete data as required.

Each SQL Server instance contains 4 or more databases which are, at a high level, simply a logical collection of objects.  These objects can include tables, indexes, views, users, etc.  The initial databases that exist are the system databases: master, model, msdb and tempdb.

Each of these databases is made up of at least 2 files.  The first is the primary datafile which stores the objects that make up the database.  The second is the transaction log file which holds all the information related to any changes made to the database.  There can be one or more of each of these types of files although having multiple transaction logs won't really help performance as this file is written to sequentially.  Data files on the other hand can benefit from having multiple files.  For example, by separating table and index data into different data files you can speed up performance as these files can then be accessed in parallel when executing a query.  Both of these files are stored on server's filesystem and can be placed where required by specifying the file path when the database is created.

As mentioned above, each database is a collection of different objects.  Below is a brief description of the most common objects that you will find in a SQL Server database. 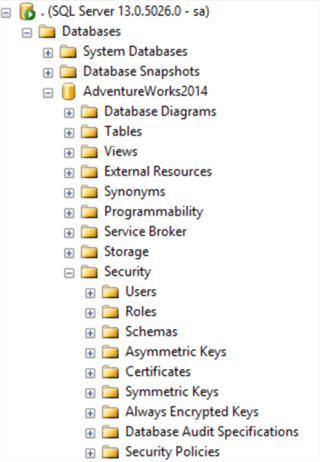 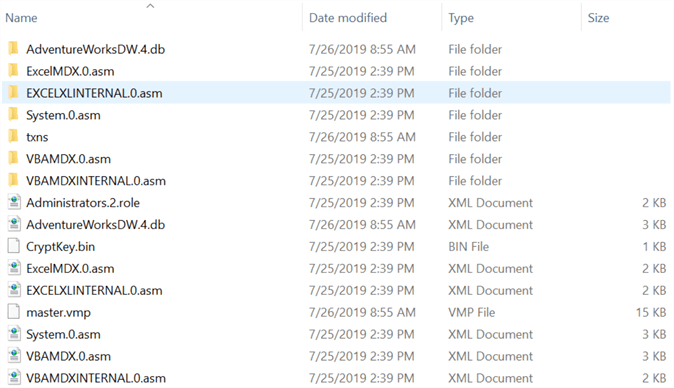 Within the database folder there are again XML files which describe the cube and dimension objects properties as well as folders for each of these object types. 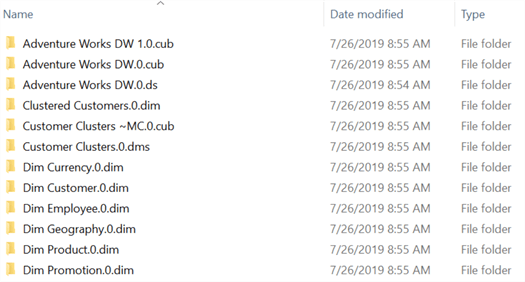 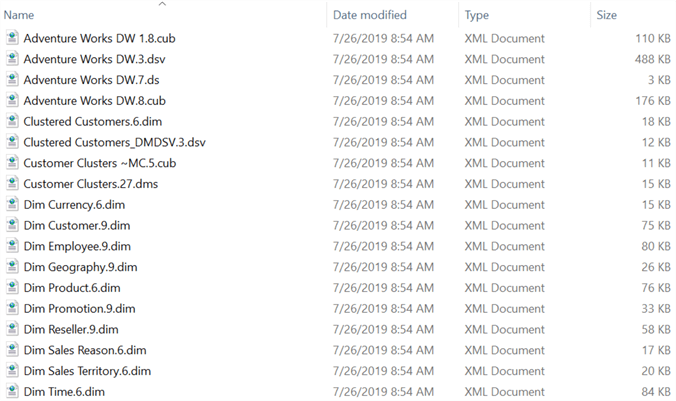 Inside each dimension object folder there are the data files for the dimension. 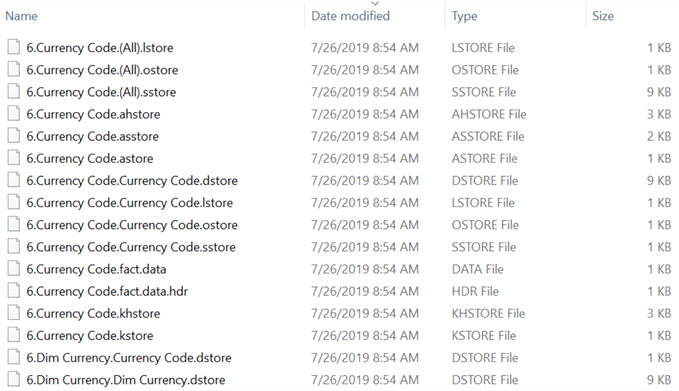 In the cube object folder we again have an XML file and a folder for each measure defined in the cube. 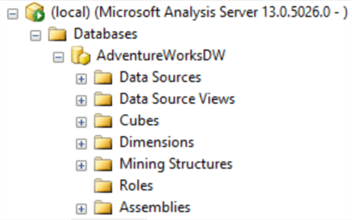 With regards to the architecture of Reporting Services, for this tutorial we won't go into any detail in the creation of a report other than to say the .rdl files that are used to define a report can be created using Report Builder or the SSDT application.  Once created this .rdl file can then be deployed to a SQL Server Reporting Services instance.  The instance itself is a Windows service that is backed by two databases.  By default, these databases are named ReportServer and ReportServerTempDB as shown below.

The ReportServer database stores metadata (basically data defined in .rdl) for each reports configuration.  This includes the report data sources as well as the definition of the report itself.  It also stores metadata related to the scheduling of each report, if one has been defined after the report has been deployed.  From a data perspective, snapshot and historical report data it also stored here until its retention time is reached.

The ReportServerTempDB is only used during runtime and stores temporary data, session information, and cached report data. 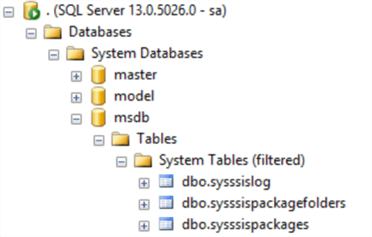 There is also no functionality for scheduling package execution built in to SQL Server Integration Services.  If you require that a package be executed on a schedule you can either use the SQL Server Agent or the Windows Task scheduler to handle this requirement.