Typically, your Biml solution won’t exist out of one large Biml script, but rather out of several Biml files, where each file has a specific purpose. In this chapter we’ll look at the different layers that can typically be found in a Biml project.

In this code sample a new connection called sourceConnection is created. However, chances are the very same connection is already used in your SSIS packages. So why create a new one, instead of using the existing connection manager? Suppose we already created a Biml connection object with the name Source in a separate file:

Then the code can be changed to this:

This makes your code shorter, more readable and more reusable. However, it’s possible you get the following error when you try this code: 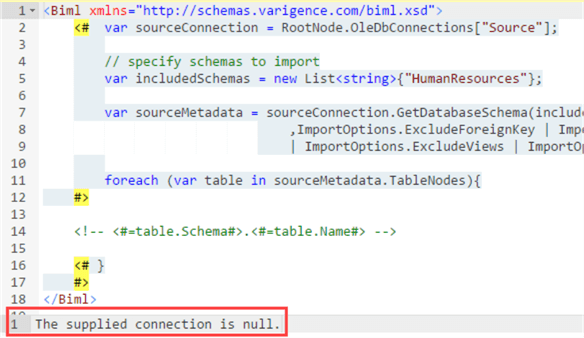 What happens? Biml doesn’t find the Source connection we defined in the other Biml file. Most likely the Biml compiler expends the wrong Biml file first, so it doesn’t find the Source connection in memory. We can solve this issue by specifying tiers. Tiers indicate in which order the Biml compiler should expand the Biml files. For example, the environment file where we create the connections becomes tier 10, and the other file becomes tier 20:

Typically, we can combine step 1 and 2 in one single step, as we saw in the previous section. It will only work though if the tiers are defined. Compiling multiple Biml files at once is done by selecting the files at the same time by holding CTRL while selecting the Biml files. Then right-click a file and choose Generate SSIS Packages.

When we want for example to generate the SSIS packages, we also need to include the environment file (step 1), otherwise the connection managers can’t be created. If the project contains many Biml files, it can become confusing which Biml files to include in which step. You can use the following naming convention to help you out.

In the next chapter we’ll put the tiers to work and generate the destination tables in the staging database.