In this chapter we will see the most common type of triggers, DML triggers.

This type of trigger is the most known and used by developers. As you may already know, DML stands for Data Manipulation Language and refers to the SQL instructions that changes data. Those instructions are INSERT, UPDATE and DELETE. Basically, DML triggers can be defined as pieces of code written mostly in Transact SQL language whose execution is not performed manually by the user and instead is run automatically in response to DML events.

To create a trigger we need to use the CREATE TRIGGER statement.

In this code section you will see the basic CREATE TRIGGER syntax.

Additionally the next table describes each of the arguments of the CREATE TRIGGER syntax.

Let's create a sample table, so we can create our first trigger.

In the code below you will see the most basic DML trigger we can make, which will return "Hello World". This trigger will show a "Hello World!" line every time a row is added to the Employees table.

In order to test this trigger we need to insert some data into the Employees table. We can do so with the next script.

On the next image you can see the execution of the previous script. Notice that when the INSERT statement executes it prints a "Hello World!" message. 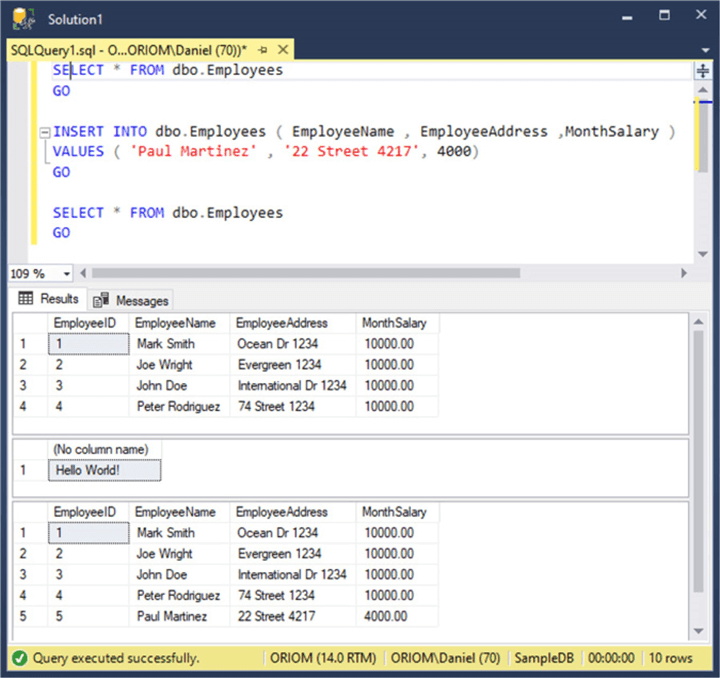