In this chapter I will introduce the concepts of nested and recursive triggers and we will see how to create a nested trigger in SQL Server.

A Word about Nested Triggers and Trigger Recursion

In order to use nested triggers in your SQL Server instance, you must configure it to allow them by setting the "nested triggers" configuration option to 1 as shown in the code section below.

At this point you have allowed nested triggers in your instance, but if you want to enable recursive triggers you need these additional steps.

To allow recursive triggers in a given database you have to set the database option RECURSIVE_TRIGGERS to ON as follows.

Something to keep in mind is that to avoid the risk of infinite loops, SQL Server has a maximum of 32 levels of nesting (and therefore recursion).

Now let's create a nested trigger using the code from the previous chapter of this tutorial. Below is the code with the addition of table NestingTestLog.

Now take a look at what I changed in the code for the TR_IUD_NestingTest trigger. Besides inserting into NestingTestLog table I removed the print @Operation variable. Instead, I am printing a message at the beginning and end of the trigger's code that will allow us to see clearly when the trigger starts and ends execution.

Additionally, on the dbo.NestingTestLog table let's create the TR_IUD_NestingTestLog trigger. In order to make things simple, this trigger won't do anything but print a message.

In the next code section you will find a script to test these nested triggers. 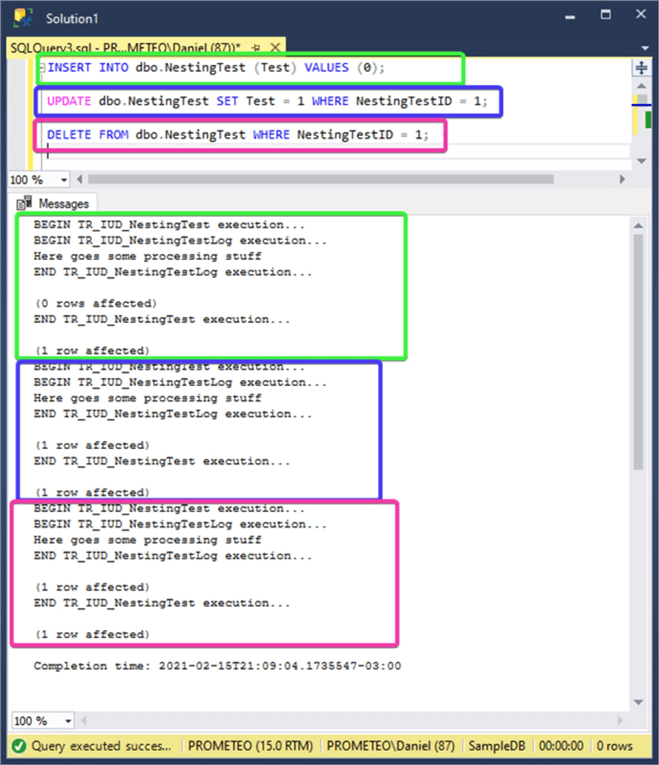