Despite SQL Trace/Profiler being deprecated for quite some time many people (me included) still use both of these features when troubleshooting issues in SQL Server.  Outlined below are a few reasons why you should be using extended events instead of using a SQL Trace or Profiler.

Anyone who has used SQL Profiler has no doubt run into the performance issues it can cause due to the resources it requires, especially when running it locally.  I’ve always tried to use server-side traces in its place as it seems to use much fewer resources than SQL Profiler but as this link shows extended events has even less overhead than a server-side trace.

SQL Profiler had many built-in templates that you could use to start a trace quickly.  These include: SP_Counts, Standard, TSQL, TSQL_Duration, TSQL_Grouped, TSQL_Locks, TSQL_Replay, TSQL_SPs, Tuning.  Early versions of extended events did not have these templates but since SQL Server 2016 we now have equivalent templates available within the SQL Server extended events new session dialog as shown below. 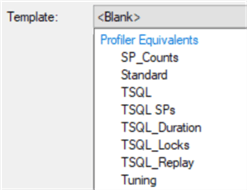