Problem
We have experimented with the Slowly Changing Dimension (SCD) Data Flow Transformation that is available in the SSIS designer and have found a few issues with it.  Our major concern is the use of the OLE DB Command Data Flow Transformation for all updates (inferred, type 1 and type 2) to rows in the dimension table.  Do you have any suggestions?

Solution
You have hit upon the one issue with the Slowly Changing Dimension Data Flow Transformation that likely requires an alternative approach.  The issue with the OLE DB Command is that it executes a single SQL statement for each row passing through the Data Flow.  When the volume of rows is substantial, this creates an unnecessary and probably unacceptable performance hit.  Let's take a step back and analyze the task at hand then discuss an alternative solution.

A dimension that implements Type 2 changes would typically have the following housekeeping columns to identify the current row and the effective date range for each row: 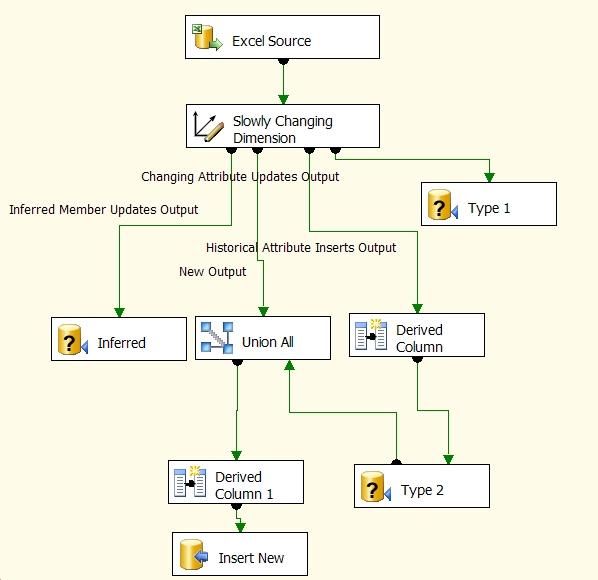 Main points about the above screen shot:

Now that we have described how the SCD transformation implements slowly changing dimension processing, we can discuss an alternative solution.  As an example we will use a Customer dimension that is updated with source system data in an Excel spreadsheet.  The SSIS package Control Flow looks like this: 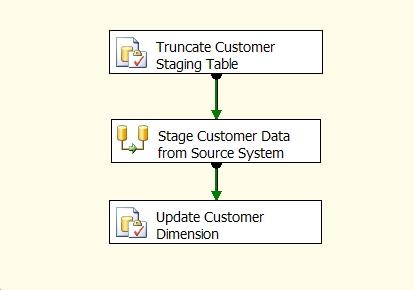 Main points about the above solution:

An additional detail about Type 1 and Type 2 processing is that a dimension may implement both.  In other words some column changes may be handled as Type 1 and other column changes may be handled as Type 2. An elegant way to implement this is to take advantage of the SQL Server CHECKSUM function.  CHECKSUM calculates a unique integer hash value based on the values of every column in a row or a subset of columns.  We can use a hash value comparison to determine whether anything has changed in our list of columns in the staging table versus the dimension table.

Let's take a look at our Customer dimension table: 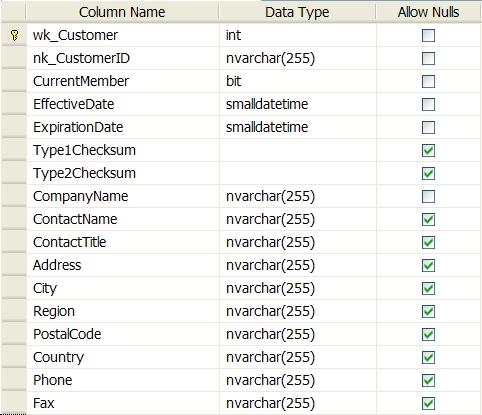 The checksum columns are defined as follows:

There is a separate CHECKSUM value calculated for the list of Type 1 columns and the list of Type 2 columns.  In our staging table we have the same two CHECKSUM computed columns; the column lists must match exactly in order for this to work.

As a general rule the staging table schema mirrors the dimension table schema but includes a couple of other housekeeping columns as shown below: 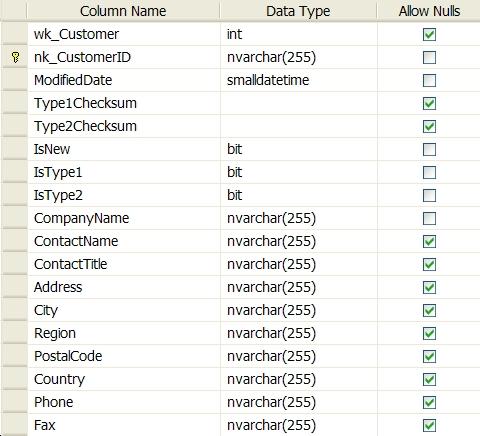 The housekeeping columns in staging are as follows:

Finally let's review the single stored procedure that implements the Type 1 and Type 2 processing and is invoked in the Update Customer Dimension Execute SQL task as noted above.  The first step is to update the housekeeping columns in the staging table to specify whether the row is new, has a Type 1 change, or a Type 2 change.  Remember that Type 1 and Type 2 changes are not mutually exclusive; you can have one, both, or neither.  We simply join the staging table to the dimension on the natural key and CurrentMember = 1 to set the housekeeping flags.

The Type 2 changes are handled by expiring the current dimension row.  The ExpirationDate is set to the ModifiedDate per the staging table less 1 minute.

A row is inserted into the dimension table for new rows as well as Type 2 changes.  Typically the EffectiveDate in new rows may be set to the minimum value of the datetime column as a convenience instead of the actual ModifiedDate (i.e. created date) just so that if a fact row had a transaction date before the dimension row's EffectiveDate it would still be in the range of the earliest dimension row.  The ExpirationDate is set to the maximum value of the datetime column; some folks prefer NULL which also works.

Let's take a look at an example of Type 2 processing in the dim_Customer table.  The following query results show a customer after the region has been updated.  Region is one of the columns that is handled as a Type 2 change.  As you can see a new row has been inserted with CurrentMember = 1, an EffectiveDate = the MdifiedDate when the change was processed, and an ExpirationDate which is the maximum value for a smalldatetime.  The original row was expired and its CurrentMember = 0 and ExpirationDate is set to the ModifiedDate from the source system less 1 minute.  The 1 minute subtraction eliminates any overlap in the effective date range.

Introduction to the Dimension Processing Destination in SSIS 2012