You have always heard that you should avoid cursors in your T-SQL code as a SQL Server best practice, because cursors are detrimental to performance and sometimes cause issues. But sometimes there is a need to loop through the data one row at a time, so in this SQL tutorial we will look at a comparison of how to do a loop without using cursor.

We all know that SQL Server, like every relational database allows the user to perform set based operations. Also, as many database vendors do, SQL Server includes a procedural extension which is the T-SQL language. It adds constructs found in procedural languages allowing a more straightforward coding to developers. These constructs were added for a reason and sometimes this is the only approach to the task at hand.

Using a While Loop Instead of Cursors in SQL Server

If you have ever worked with cursors, you may find this title a bit confusing because after all, cursors use while constructs to iterate between rows. But besides that, I want to show you that in some circumstances when we use a cursor to iterate over a set of rows, we can change it to a WHILE loop as FOR loops are not available in T-SQL. In such cases, the only challenge will be to choose a proper exit condition.

Not everything is wrong with cursors, they also have some advantages over other looping techniques.

There are also some negative aspects that you should be aware when using cursors instead of other looping options.

There are also benefits to use a WHILE loop compared to a cursor.

The next list details the negative aspects of WHILE loops.

Building the Test Environment for Cursors and Loops

To test this, I will use a table with an identity column (CursorTestID), a varchar column (Filler) and a bigint column (RunningTotal).  Here is the SQL statement:

But before starting, first we need to generate some test rows with the next Transac-SQL script.

On the script above you will notice that I only used a single insert statement and I took advantage of the batch separator (the GO 500000 command) as a shortcut to execute this insert statement 500000 times. You can read more about this method to repeat batch execution on this tip: Executing a T-SQL batch multiple times using GO.

Let’s create a cursor to fill the RunningTotal column. Notice on the following example that I declared the cursor with the option FAST_FORWARD. This is done in order to enhance the performance of the cursor because according to Microsoft the FAST_FORWARD argument “Specifies a FORWARD_ONLY, READ_ONLY cursor with performance optimizations enabled”. In other words, we are instructing SQL Server to use a read only cursor that can only move forward and be scrolled from the first to the last row.  Here is the syntax:

The next image is a screen capture from SQL Server Management Studio (SSMS) showing the execution of the script above. As you can see, it took three minutes and five seconds to update the 500,000 rows of our test table. 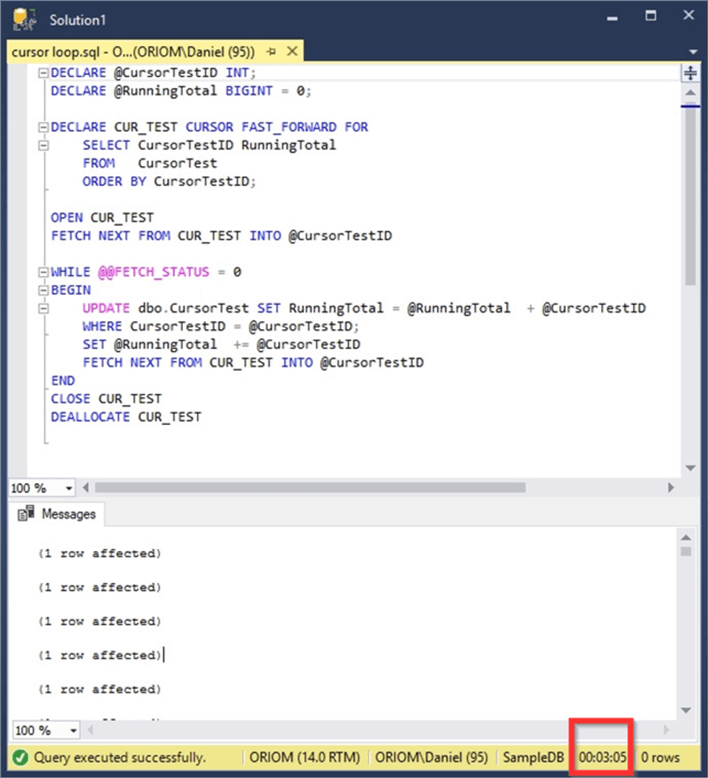 Now I will rewrite the previous script avoiding the use of a cursor with a WHILE loop statement. You will notice that it contains a While loop which is almost identical to the statement block in the cursor script. This is, as I previously said, because even when working with cursors you need to use an iterative control structure.

The next image is a screen capture from SSMS of the execution of the loop example above. It took less time to run the while loop than the cursor. 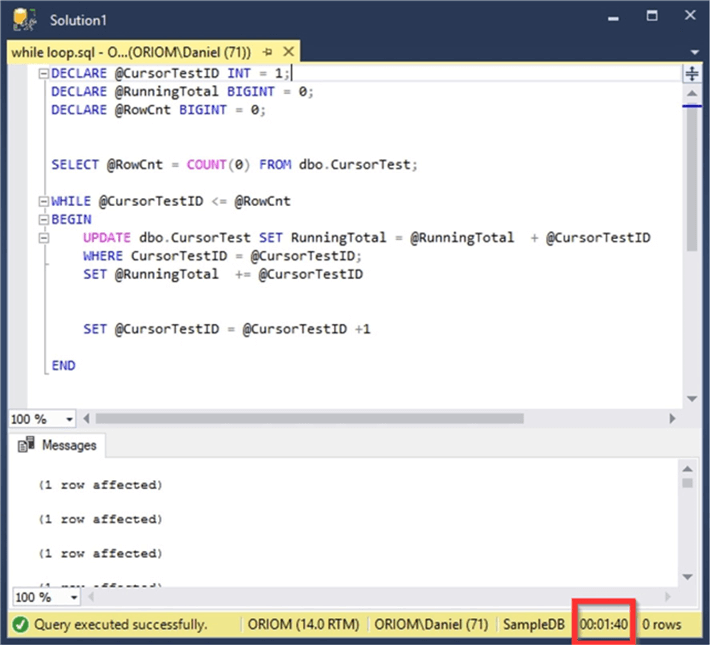 Let’s take for example the cursor in the tip Standardize SQL Server data with text lookup and replace function. A word of advice, in order to run this code, you should follow the steps in the tip to create the test environment.

And here is the cursor code:

If we dissect this code, we can see that there is one cursor that goes through the table products which I copied below.

SQL Server Cursor Example Converted to a While Loop

In order to replace this cursor with a WHILE LOOP, we need to create a temporary table to implement a tally table. For all of you who don’t know what a tally table is, we can define it as a table that contains a pair of columns consisting of a key and its value. In our particular case we will use a sequential integer key starting from 1, so we can use it as an iterator. This key will be associated to a ProductID from the Products table.

At first, since the Products table has the ProductID key defined as an identity you may be tempted to bypass this step, but you have to consider that in a real case a row could have been deleted, therefore you won’t be able to use the identity column as an iterator. Additionally, a row can be deleted while we are running our code and it could lead to execution errors. To avoid this, we are going to add a TRY-CATCH block. I will go into this further on.

Before starting the WHILE loop, we need to set its start and stop condition. For this matter I added two new integer variables named @Iterator and @MaxIterator. The @MaxIterator variable is used to keep the number of items in the #TallyTable table and we set its value only once before starting the loop. The @Iterator variable is initialized to 1, as we defined it as the starting number on the sequence and we are going to increment its value at each iteration.

Differences between Delete and Truncate in SQL Server

How to Create a FOR Loop in SQL Server