The easiest way to create SQLCLR objects is to use the Database project template in Visual Studio 2005 Professional Edition or Team Edition. Visual Studio 2008 with Service Pack 1 also supports database projects for SQL Server 2008. Before I walk through that process you're going to need a database. The example files use a connection to the database ns_lib, which you can create with this T-SQL:

Once you have a database, you'll need to pick a programming language. This tip is written in C# but you can also use VB.Net or C++. Then in Visual Studio use the File/New/Project menu command and specify the project name and folder. Here I've named the project ns_txt: 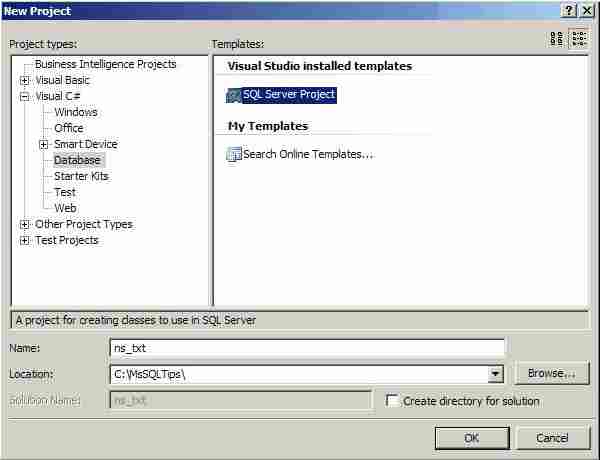 If you have existing database connections defined in Visual Studio, the "Add Database Reference" dialog box will open and you'll be given the chance to pick one of the Available References as depicted here: 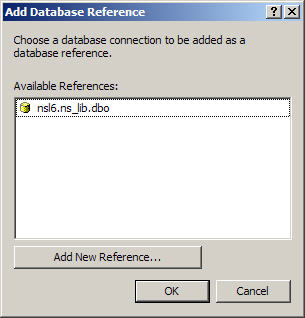 You can pick a database reference or press the "Add New Reference..." button. If you don't have existing connections Visual Studio goes right to the "New Database Reference" screen and allows you to create a connection to the database where you want the SQLCLR assembly to be loaded. The following picture shows adding a connection to the ns_lib database on the local machine's default instance: 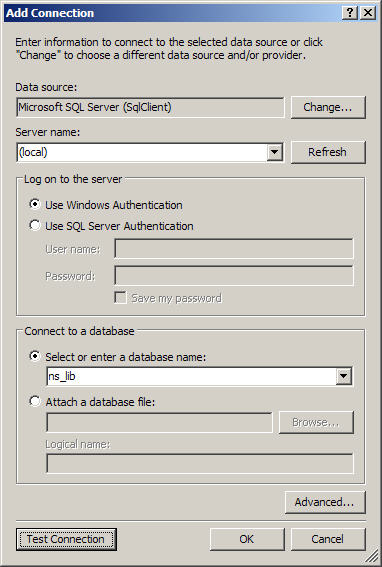 Once a connection is selected Visual Studio will ask to enable debugging with this dialog box:

The facility to debug the CLR code while it's being called from within SQL Server is a fantastic aid to productivity. However, debugging stops all managed threads, which is the SQLCLR code, from running while debugging. Therefore, I only debug CLR code running on my local development machine. Never debug SQLCLR code on a production server. You can learn more about debugging in this tip Debugging SQL Server CLR functions, triggers and stored procedures. Pick Yes to enable debugging, or No if you don't want it.

Visual Studio creates the project files and you can start work. The next step is to add the stored procedure to the project. Do this by selecting the ns_txt project in the Solution Explorer window and using the menu command Project/Add Stored Procedure. The Add New Item dialog box pops up and you can name the file for your stored procedure code: Here's the dialog with the name that I've chosen, ns_txt_file_write.

Visual Studio creates the file with a partial class named StoredProcedures. You can change that name, if you like. It also creates a "public static void" method for your procedure with the name you gave it and no parameters. Above the procedure declaration is the line "[Microsoft.SqlServer.Server.SqlProcedure]". This line is an attribute that tells Visual Studio how to deploy the procedure into SQL Server.

Now that the project and code file are created, it's time to write the code that implements the stored procedure. ns_txt_file_write has two parameters, file_name and file_contents. Both are strings declared with the SqlString type. The Microsoft.Data.SqlTypes namespace, which is referenced in the third using statement, provides types that allow SQL Server to convey the data precisely and include properties such as IsNull, to communicate that a value is null as well as conversion functions. While it's possible to use CLR types, such as string, for the parameters, I prefer to stick to the SqlTypes to avoid conversion overhead. However, the SqlTypes don't match up with that the CLR expects for strings or integers so in the C# it's necessary to refer to the Value property of the parameter in order to use the variable.

Here's the function all done: 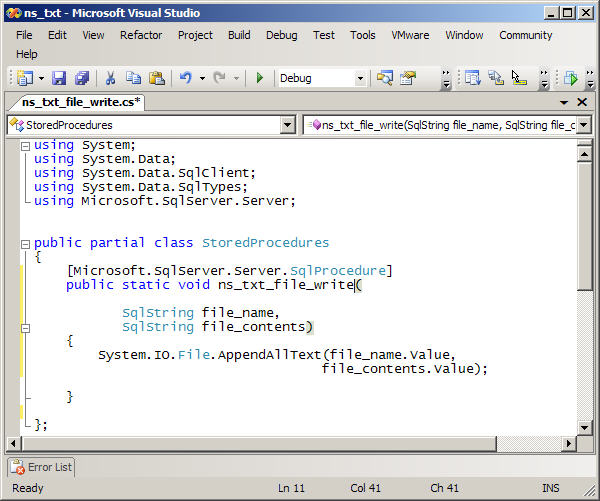 That's it? All this activity for just one line? It's kind of disappointing but it illustrates the power of the SQLCLR. The CLR has the built-in method AppendAllText that takes care of the job and all that ns_txt_file_write has to do is expose it to SQL Server.

The permission level is set on the Database tab of the projects properties. The following screen shot shows the Permission Level highlighted in red: 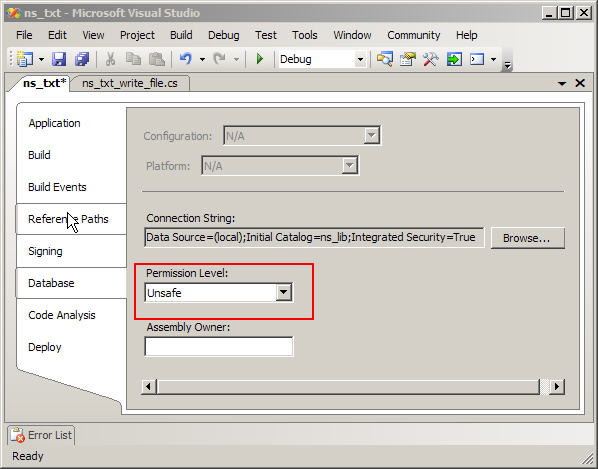 Now that everything is ready the project can be compiled and loaded into SQL Server using the menu command Build/Deploy Solution.... That almost works. Instead of deploying to SQL Server I got this message:

CREATE ASSEMBLY for assembly 'ns_txt' failed because assembly 'ns_txt' is not authorized for PERMISSION_SET = EXTERNAL_ACCESS. The assembly is authorized when either of the following is true: the database owner (DBO) has EXTERNAL ACCESS ASSEMBLY permission and the database has the TRUSTWORTHY database property on; or the assembly is signed with a certificate or an asymmetric key that has a corresponding login with EXTERNAL ACCESS ASSEMBLY permission. If you have restored or attached this database, make sure the database owner is mapped to the correct login on this server. If not, use sp_changedbowner to fix the problem.

As the message explains, SQLCLR code with the EXTERNAL_ACCESS permission set must either be signed or the database must be given the TRUSTWORTHY attribute. Code signing is a subject for another tip so here let's use the easier alternative of making the database TRUSTWORTHY with this ALTER DATABASE statement:

Another problem that you may run into is database ownership. As the message indicates the owner of the database must have EXTERNAL ACCESS ASSEMBLY permission for assemblies that require external access to work. I prefer to have databases owned by sa so if your database isn't, it can be changed with this exec statement:

My next try with the menu command Build/Deploy Solution was successful. Behind the scenes Visual Studio is telling SQL Server to create an assembly from the compiled code and to create the stored procedures with these SQL Statements:

Using a Visual Studio Database project makes creating SQLCLR procedures easy but you could use a text editor to create the cs file and handle the compiling, assembly loading, and stored procedure creation yourself. To read more about how to do that see the tip CLR function to delete older backup and log files in SQL Server, which shows the individual steps.

Once these security issues are managed and the deployment is successful, it's time to test out the stored procedure. From an SSMS query window it is now possible to execute the procedure. You may have to modify the @file_name parameter of the following query to point to a directory that exists on your server. Once it's set go ahead and execute it:

There are additional details, such as error handling, that can be handled more robustly but this simple example illustrates how to create a stored procedure that takes advantage of the power of the CLR from within SQL Server. The procedure is also limited to working with @file_contents of only 4000 characters because of the data type given to the stored procedure by Visual Studio.

SQL Server CLR function to concatenate values in a column

Use the SQL Server CLR to Read and Write Text Files

Read and Write Binary Files with the SQL Server CLR

Exporting CLR Assemblies from SQL Server back to .dll files