SQL Server has a lot of little features that are nice to use, but sometimes these things come back to get you.  One such issue is the use of aliased users.  This tip shows you how to find security holes when aliased users are setup in your databases and also that this feature will be deprecated in SQL Server 2008.

To begin with you can run this simple query below against each database or automate it to run against all databases to find users with "dbo" access.

But this query may not find all users with "dbo" access, because of a security hole in SQL Server. Let me explain this.

The script below will do this for us.:

Now lets check from SQL Server Management Studio for the users we just created. Notice that the "AliasUser1" we aliased to "dbo" is not seen under users. SQL Server does not show aliased users in the "Users" list. 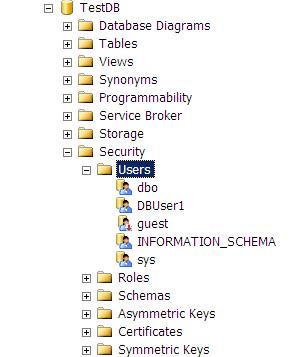 So how do we find our aliased users in a database?  Execute the query below:

In the resultset below we see "AliasUser1" has a "\" in front of it, if we check the column "isaliased", 3rd column from right, it has a value of 1 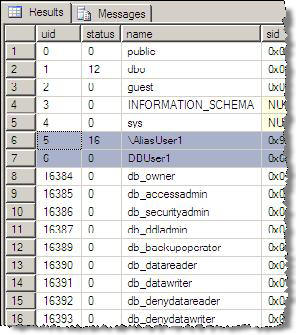 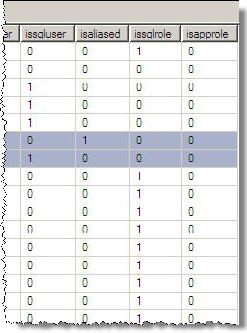 The command below can also be run to list all the users and aliases. In the output below, you can see the alias user "AliasUser1" does not show up as a user, but in the second resultset it shows up as an aliased user.

Another interesting point to note is that, you cannot drop an aliased user using the sp_dropuser stored procedure, instead, use sp_dropalias.

By having a login use an alias to "dbo" this gives this account full access to your database, just like a db_owner.  The downside is there is nowhere in SQL Server Management Studio that you can see this.  You can try this for yourself.  Follow the above steps in one of your databases and then login using login "AliasUser1" and password "test" and you see that this login can take any action it wants in the database where you created the alias.

Ranga Narasimhan has been in IT for over 10 years working on Siebel, Visual Basic, Crystal Reports and SQL Server.