I have a requirement to provide users with the capability to define their own reporting hierarchies for sales data. For instance they had a report which broke down sales by the four regional VPs then by office.  Later they created regions, assigned VPs to each region, then assigned offices to each VP.  Now they want to be able to create a number of other scenarios and choose which one when they run a report.  Can you provide some suggestions on how to do this?

There is a relatively simple solution to your problem that leverages the many-to-many dimension capability in an SSAS cube.  Let's start out with a simple dimensional model then expand upon it to allow multiple reporting hierarchies.  Schema 1 is shown below: 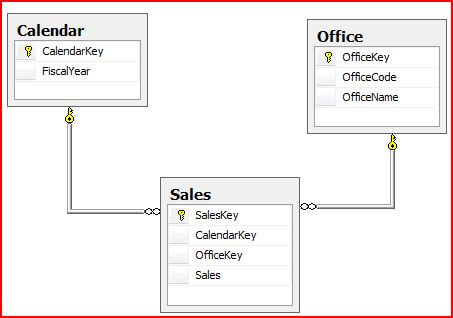 The above schema shows a Sales fact table, joined to a date dimension (Calendar) and an Office dimension.  This allows us to report on sales based on fiscal year and office.  Now let's introduce a revised schema to support your requirement of allowing users to define their own hierarchies for reporting.  Schema 2 is shown below: 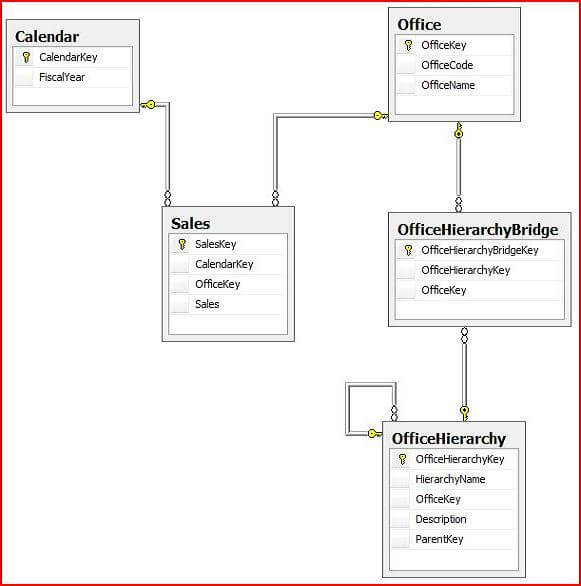 The OfficeHierarchy table allows us to define multiple reporting hierarchies using a parent-child relationship.  The HierarchyName column value is defined by the users and appears in every row that belongs to a particular hierarchy.  Each row that we add to the table is either a parent (i.e. a grouping) or a child (i.e. an office).  Each child row belongs to a single group and contains an OfficeKey value which matches a row in the Office table.  Each parent row has one or more child rows, which can represent actual office(s), group(s) or both.  The OfficeHierarchyBridge table has a single row in it for every combination of OfficeHierarchy and Office.  The relationships between Office, OfficeHierarchyBidge and OfficeHierarchy will allow us to take advantage of the many-to-many dimension capability in SSAS.  In fact the cube wizard will automatically recognize the many-to-many dimension provided the foreign key relationships exist as shown in the above schema. 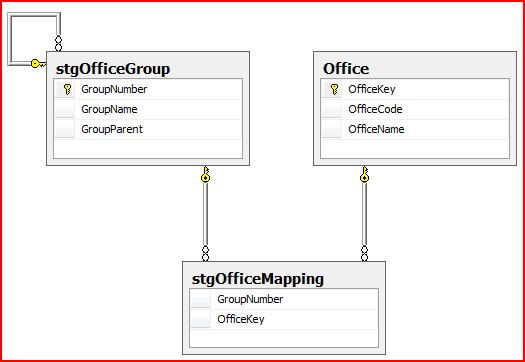 The stgOfficeGroup table is shown below with some sample data:

FY 2008 is a top-level group, and will be the name of our hierarchy.  The other four rows each represent a group and they are all children of the FY 2008 group.

A portion of the stgOfficeMapping table is shown below with some sample data: 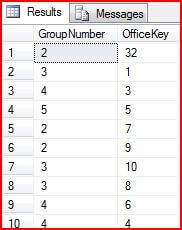 Each row represents an office assigned to a group as defined in the stgOfficeGroup table.

The following are the main points about the above script:

Now that we have populated the OfficeHierarchy and OfficeHierarchyBridge tables, we are ready to build an SSAS cube.  For the basics of building a cube, please refer to our earlier tip How To Build a Cube From an Existing Data Source Using SQL Server Analysis Services.  There are two settings in the Parent Key attribute of the Office Hierarchy dimension of our cube that should be highlighted: 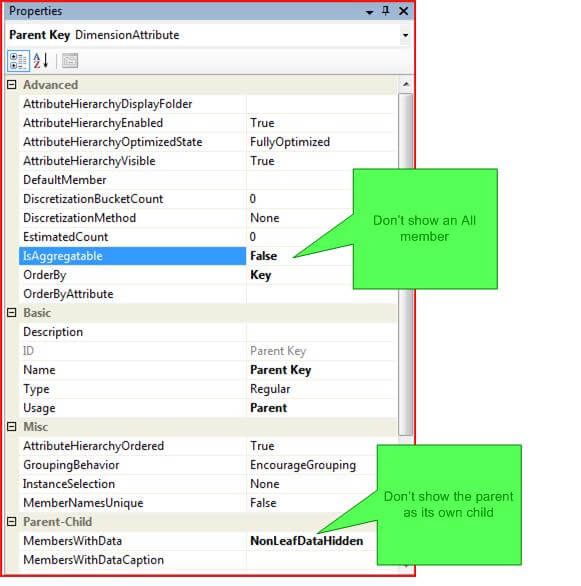 Since the Office Hierarchy dimension will hold numerous hierarchies, we really don't want an All member which would cause us to see measure totals that are greater than the actual detail in our fact tables.  Therefore we set the IsAggregatable property to False.  The MembersWithData property is set to NonLeafDataHidden so that the parent (or group) does not also appear in its list of children.

Now we are ready to see our multiple hierarchies in action.  The next two screen shots show an Excel pivot table connected to the SSAS cube where the Hierarchy Name column is used as the filter.  First we'll show our pivot based on the FY 2008 hierarchy: 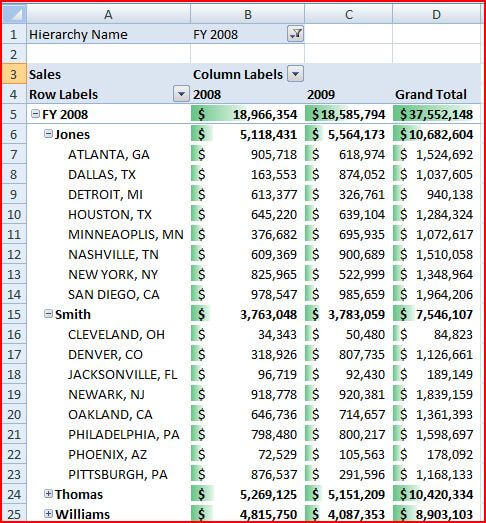 Next we'll show the pivot for our FY 2009 hierarchy: 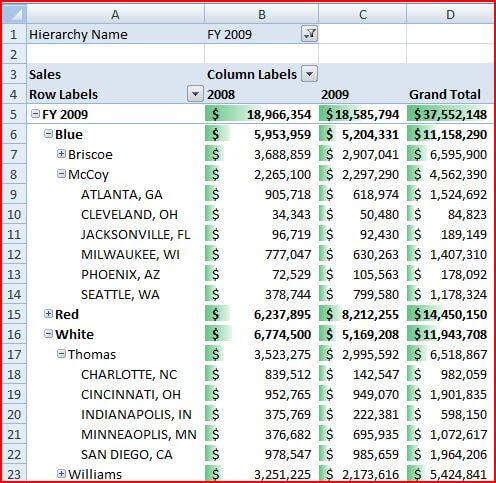 The benefit of this approach is that you can support multiple reporting hierarchies for any dimension by simply adding a bridge table and a <dimensionname>hierarchy table.  Adding the actual hierarchies themselves does not require any further schema changes.