How to Automatically Monitor Windows Event Log from SQL Server

When troubleshooting server related issues like unexpected crashes or service restarts, SQL Server DBAs often browse through the Windows Event log looking for clues. This is a reactive approach where the DBA is investigating after an incident has been reported.  The more proactive approach would be to regularly check the log for any warnings or errors. Many production DBAs are often responsible for large numbers of instances in the organization and don't have the time to go through each individual event log of every server. In this tip I will show an automated way of monitoring the application event log of SQL Server boxes. The system generates a summarized report of SQL Server errors and warnings from the target machines' event log and sends it to the DBA via e-mail . The DBA can then browse through this report to see which server needs to have an investigation.

At the center of the event log monitor is a simple T-SQL script file. This file will be stored in each SQL Server machine's local drive. We have kept this file under the C:\EventLogReport folder for simplicity and demonstration purpose. The script is executed by a batch file, also located in the same folder. The batch file in turn will be called by a Windows scheduled task every morning (or any time you prefer).

In our example, we have called this scheduled task "Event Log Report" (see below). It calls the EventLogReport.cmd command file every morning at 7:00AM. 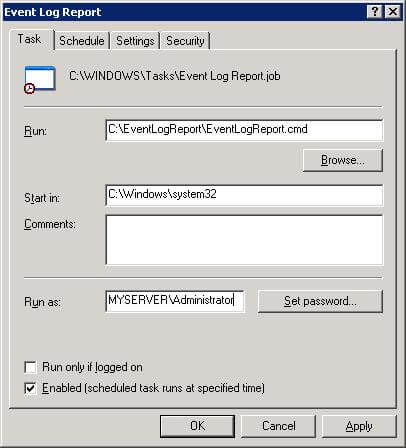 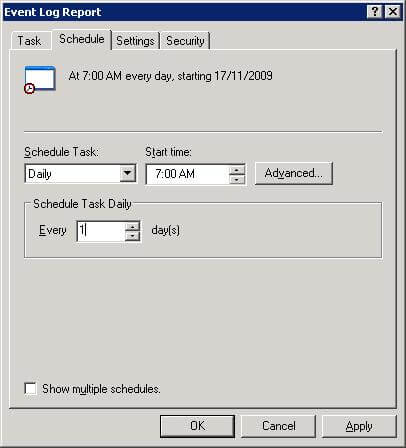 Now instead of having a Windows task calling a script file from the file system, you may want to create a stored procedure and call  that procedure from a SQL Server job. We have not taken this approach because the stored procedure will have to reside in a database and unless there is a specific DBA / monitoring type of database in each of your target SQL Servers, you should not create it in either the master or any user database.

When the SQL script file executes, it looks at the application event log of the local server. The code only looks at the events of the last twenty-four hours. If any error or warning messages are  logged for either the SQL or the Agent service, those entries are copied to a temporary table. A summary level message is then generated from these records. Finally the summary message is uploaded to a table in a central database.

The database where the summary message is uploaded can be hosted in a special "monitoring" instance. I try to call this type of monitoring database the "DBA" database. Its sole purpose will be to act as a centralized repository of information for all the SQL Servers in the network. It can also have a number of procedures, functions and views for monitoring different SQL Servers running in the enterprise.

If you think about this scenario, each SQL Server machine will execute a Windows task during a particular time of the day. Each task will add a record in a centralized log table. The script executed by the task will run in the context of a local SQL Server instance running on the machine and it will access the remote table via a linked server.

The monitoring SQL Server instance will have a scheduled job that will send the contents of this log table to the database administrator via e-mail. This SQL job will have to run well after all the Windows tasks have finished updating the central table. This is because the SQL job will have no way of knowing when all the target machines have completed posting their summarized data . Usually the Windows task takes less than a minute to finish and it would be safe to schedule the SQL job to run after an hour. So if your target machines are gathering event log reports at 7:00 AM in the morning, you can schedule the SQL Server job to run at 8:00 AM.

The following diagram shows how the system works. 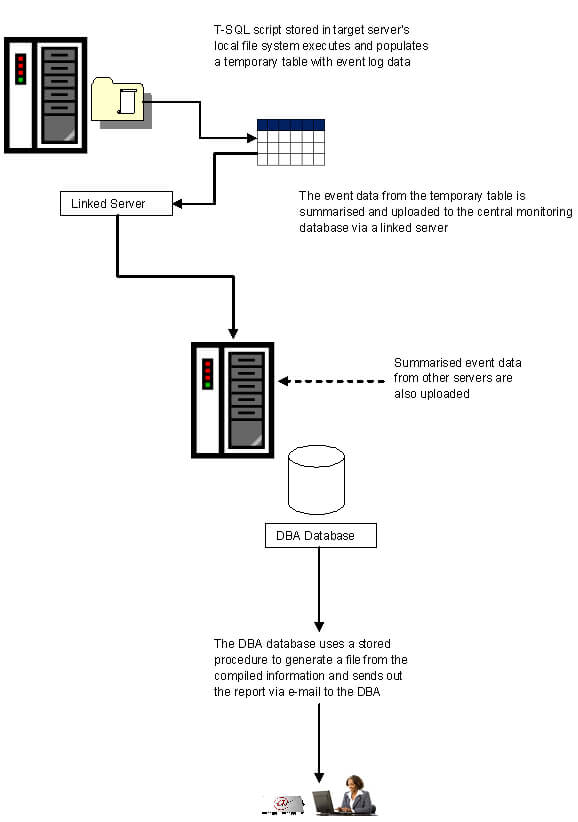 The T-SQL script makes use of a VBScript program called eventquery.vbs to extract information from the event log. This VBScript file is a system supplied component and by default is located under the <system_root_drive>:\Windows\system32 folder of a Windows Server 2003 system. You can run eventquery.vbs from the command prompt and specify one or more parameters as  filter criteria.  The script is a simple ASCII text file: you can open it in Notepad and see its inner workings.

The command syntax for eventquery.vbs with some of its important parameters is:

Of these, /s , /u and /p switches are self explanatory. You do not need to provide a username and password if you are executing the code in the local server. The /fo parameter specifies the output format: you can view the event log in tabular fashion with table and column headers; you can view it as a list and also in a comma separated format. If you are using CSV or TABLE format and specify the /nh parameter, column headers will be suppressed. Finally the /l switch specifies the log you are extracting the information from: it can be the application, system or security event log. Errors and warnings related to SQL Server are logged under the application log.

The interesting parameter is the /fi switch which specifies the filter conditions to be applied. Eventquery.vbs only accepts filter conditions  in a predefined format and if you want to know what they are, you would probably want to have a look at the code behind the script. The general format of a filter condition is like the following:

The field can be any of the following  column headers you find in a Windows Server event log:

The comparison operator can be

To give an example, let's say we are interested about all application event log entries that are not of "information" type and were logged after a particular date and time. We can issue a command like the following

As you can  see, the csript.exe application (also located under the Windows\system32 folder) is executing the eventquery.vbs script. We have specified the whole filter condition after the /FI switch and it is delimited by double quote marks. Also, the conditions are combined using an AND operator. The output format is to be tabular and we are capturing the results in a text file using the redirection symbol (">"). When the output file is opened in Notepad, it looks like the following: 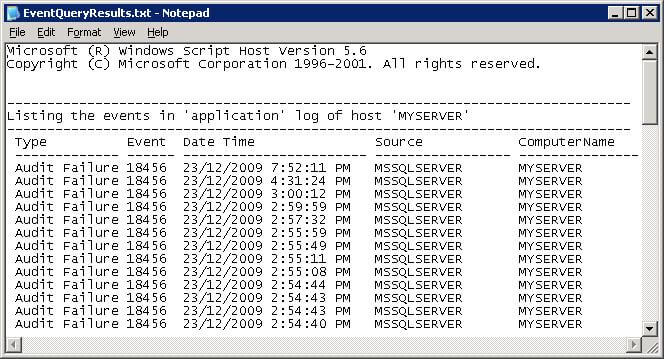 Now let's look at the T-SQL script that makes use of eventquery.vbs. We have saved this script file under the C:\EventLogReport folder of the monitored box.

A Walk through the above Code

At the very beginning, we have created two tables in the tempdb database: one will be used for holding the server's machine name  (dbo.SystemName) and the other will be used to hold the output of the eventquery command (dbo.EventQuery). We then declare a number of variables.

The name of the machine is found by calling the Windows hostname command. Next, we define the start and end date time for the filter condition. The @CurrentDateTimeText variable holds the current date and time while @BeginDateTimeText holds the date and time of a day before. We define these variables because we are interested in the events of the last twenty-four hours. The eventquery.vbs expects date and time to be in a specific format and since none of the CONVERT function output styles caters for this format, this block of code is used to manually generate the date and time in required form.

The next block of code is used to dynamically build the parameters for eventquery. We are interested to trap warnings, errors or audit failures: in other words any event other than the type "information". Also, the output of the query will be in comma separated (CSV) format and saved in a file called "eventquery.txt". The file will be created in the same folder where the script is located.

Once the data is loaded, the rest is easy. Each data field is delimited by double quote marks, so the first thing we do is get rid of those. Next, we count the total number of warnings, critical errors and audit failures for SQL Server and Agent services. This aggregate values are saved in local variables.

Once the summary values are obtained, a message is constructed with all the different pieces of information. This includes the machine name, the date and time range as well as the total number of events for each of the services. The message is then uploaded into a table called Monitor.EventCheck_Log. This is the centralised table located in our DBA database's Monitor schema. In the code above, the linked server is called DBA and it is pointing to the database called DBA.

Once the data is uploaded in the central repository, the tempdb tables are dropped.

The scr_EventLogReport.sql file is called by a Windows command file. The contents of this file is pretty straightforward. It calls the sqlcmd utility to run the script file in the context of a SQL Server instance running in the local machine. Note that we have not specified the username /password in the sqlcmd command: it will be specified in the Windows schedule task properties. In our example, the command file runs under the local administrator credentials.

Once all the servers have uploaded their event log summaries to the central table, it needs to be sent to the DBA via e-mail. The DBA database will have two tables and one stored procedure for this purpose. We have already seen the central table Monitor.EventLogCheck_Log; the other table is EventLogCheck_Summary_Report. Both tables belong to a schema called "Monitor" and are almost identical in structure:

The reason we created the second table (Monitor.EventLogCheck_Summary_Report) is because we would like to add a header section in our final report. The stored procedure for creating the report is shown below:

As you can see, Monitor.usp_MonitorEventLogs is also a straightforward procedure. We add a header section into the Monitor.EventLogCheck_Summary_Report table and then simply copy the data from the central table into it. Next, some variables are initialized. We have used hard-coded values here for demonstration purpose - in your actual system they can be dynamically populated from metadata tables. Next, the contents of the Monitor.EventLogCheck_Summary_Report table is output using the bcp command. Finally the bcp output file is sent to the DBA via e-mail. Once the process is completed, the central table is cleared for the next day's event summary data. Also, when the stored procedure starts, it clears up the report table.

This stored procedure is invoked from a SQL Server job. The properties for this job is shown below:

When the job executes, the DBA is sent an e-mail with an attachment. The contents of the attached file will look something like the following:

Here, the event log monitoring report is showing the status of three servers: SALES, MARKETING and ACCTG. Ideally we would want to see zero errors and warnings; however if there are errors and warnings reported, the DBA can have a look at the server involved for further analysis.

Assumptions, Limitations and Points to Note

There are a number of points to note about this monitoring system:

This happens because the file was not generated in the first place due to an "Access is denied" error.

You can take one of the following steps in such situations: