The LoginSecure property is what tells the connection to use mixed-mode authentication - a value of true, which is the default, will use Windows authentication and defaults to the security context of the currently logged in user and a value of false will switch it to mixed-mode authentication. The set_Login and set_Password properties will set the login and password, respectively. Note that at this point, there will be no connection made to SQL Server unless an action is taken. You could verify this by running SQL Server Profiler and check for the credentials that you passed using the LoginName column. To initiate a connection, we can retrieve the list of databases running on the SQL Server instance by adding the code below.

Run the code either by typing it in the console or creating a PowerShell script and saving it.

To make the script execution a bit easier to find in SQL Server Profiler, I have added the ApplicationName property 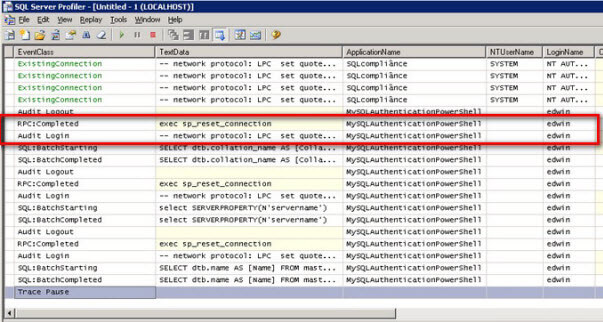 As with most applications that require authentication, it is not recommended to hard-code the credentials within the script - especially in clear text. Being a database administrator, you have elevated privileges on the SQL Server instances that you manage and storing your credentials in any script or application poses a security risk. One approach you can apply is to encrypt the credentials in your script. I will explain how that can be done using Windows PowerShell in a future tip. Another approach is to prompt for credentials when connecting to a SQL Server instance. This is where the Get-Credentials cmdlet come in. You use the Get-Credential cmdlet to create a secured credential object based on a supplied username and password. Depending on the system registry setting you have on the computer you are using to run Windows PowerShell, the cmdlet will prompt for credentials either via a dialog box similar to Windows login dialog box or thru the command line 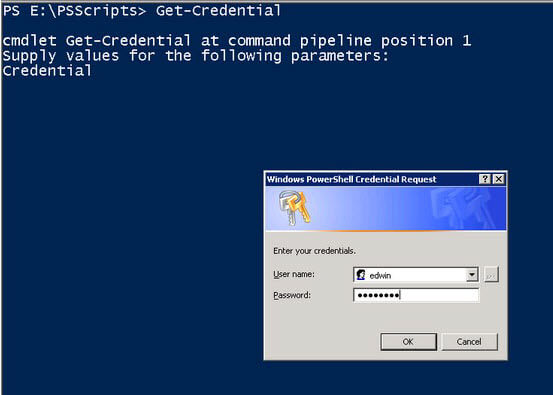 The Get-Credential cmdlet can be used for both Windows authentication and SQL Server authentication when connecting to SQL Server. And while the default for Windows authentication is to use the credential of the currently logged in user, you might want to log in using a different Windows account with much higher privileges. A typical security principle when logging in to servers is to use an ordinary user account and switch to a user account with much higher privileges only when necessary. With Get-Credential, if you enter a user without a domain name, it will insert a backslash before the name. We will then be responsible to deal with the extra character when processing the credential.

Notice how we no longer have the credentials hard-coded within the script. The UserName and Password properties of the Credential object are the ones we used. By doing so, we need to update the set_Password property of the ConnectionContext to set_SecurePassword. We also need to deal with the extra backslash character introduced by the Credential object using the -replace parameter.

This approach has provided us with a secure way of connecting to SQL Server by eliminating hard-coded credentials in scripts.