SQL Server 2005 and SQL Server 2008 both provide an option to share a single schedule for multiple jobs when required. This feature could help to improve the simplicity and manageability of your SQL Server scheduled jobs environment. You can share any existing schedule even if it is already associated with a job or you can create a new schedule without any associated job, and attach it later to one or more jobs. In the upcoming sections we will go through both scenarios along with a couple of considerations.

Please note the images used in this tip are from SQL Server 2005. There may be some minor GUI differences for SQL Server 2008, but the overall procedure has been tested and it works on both versions of SQL Server.

The following script will create a job named 'Tip-demo-Job1' with an attached schedule 'Mid-night-schedule' configured to run at 12:30 am. This script assumes that your current login has rights to manage schedules and jobs in SQL Server agent. The active login will be the owner of the created demo jobs. To work with configurations of schedules and jobs a Login is required to be a member of the sysadmin fixed server role or it should be member of the SQLAgentUserRole, SQLAgentReaderRole or SQLAgentOperatorRole fixed database roles in msdb database.

I have also created a new job 'Tip-demo-Job-2' by using the commands (a and b) provided above in script #1. 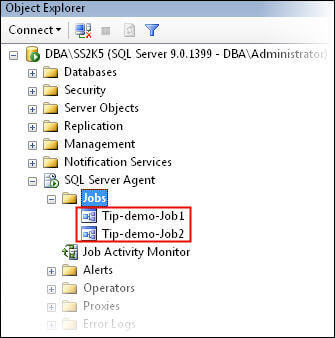 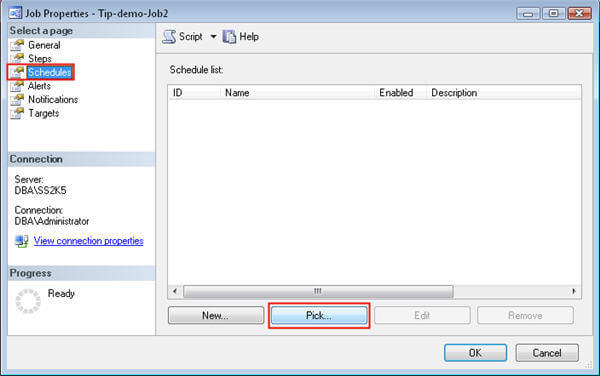 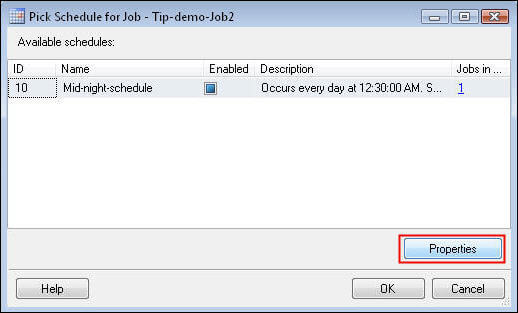 Now the 'Mid-night-schedule' is shared by both jobs (Tip-demo-Job1 and Tip-demo-Job-2) as shown in the following image in the Manage Schedules frame. Clicking on the count of Jobs, as shown below, will display the names of the jobs using this schedule. 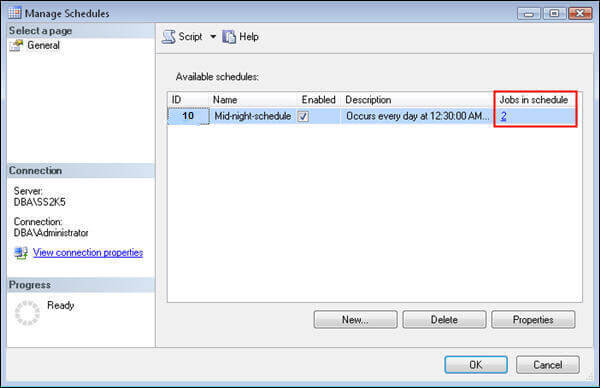 Alternatively, the same task can be performed using T-SQL. We can attach the 'Mid-night-schedule' to 'Tip-demo-Job2' using T-SQL as follows.

Create a schedule for later use 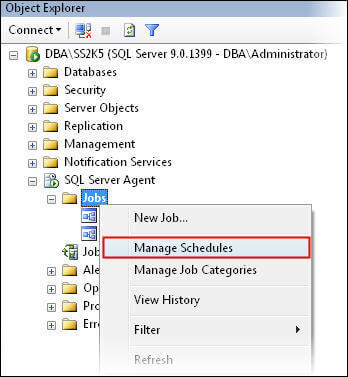 The same task can be performed with T-SQL as follows.

The schedule 'End-of-shift' may be used with any number of jobs in the same way as mentioned above.

Schedules with same name may exist

In such case use the parameter @schedule_id instead of @schedule_name. In msdb, the system table dbo.sysschedules may be queried to get the ID of any schedule. You can also get the schedule ID through the SSMS GUI. Right click on the Jobs folder and select the Manage Jobs option from the right click menu. A frame containing all schedules with the schedule ID will appear. You can note the schedule ID of the appropriate schedule for unique distinction of the schedule.

Schedules and jobs in SQL Server have a flexible relation. More than one schedule may be added to a single job and multiple jobs may be attached with a single schedule. While sharing a schedule among multiple jobs, it is important to note that if you change any parameter or configuration of a shared schedule then the change will be reflected in all jobs that use that schedule. This feature adds more flexibility if considered properly, but also may result in confusion and abrupt functionality otherwise. For example if you access a shared schedule configuration window through one of its attached jobs and change the time configuration or disable the job, then this change will propagate to all jobs where the particular schedule is shared.