Let's start the SSD blogs off with a comparison of the SQLIO tool running on my laptop and compare the results to some other traditional spindle based systems.

First, let's outline the systems we'll be comparing throughout the SSD blogs:

For our SQL IO test, we'll use the following parameters:

First, here are the results for operations against the simulated DATA files/luns: 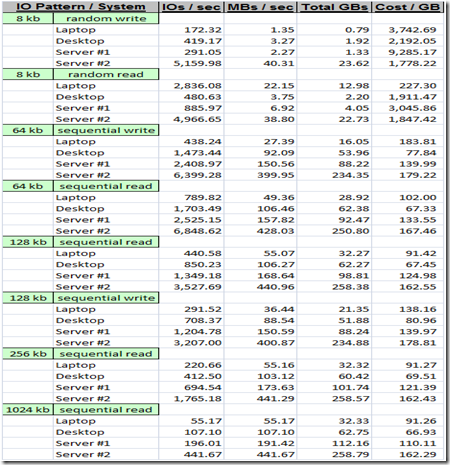 And secondly, here are the results for the tests against the simulated LOG files/luns: 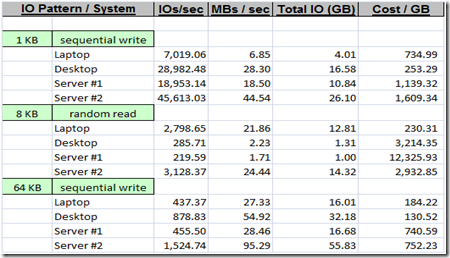 So, where did the SSD perform well? Clearly, it is king in the random read scenarios, nearly keeping pace with Server #2 on each LUN - and, if you include costing in the figures, it's a landslide in favor of the SSD. These benefits for random read patterns are great for day-to-day computing, which is why I see such improvements on my laptop for day-to-day use. In the SQL Server world, this would be beneficial for traditional OLTP-like read patterns (i.e. small, singleton type reads of data) and also for something else we've looked at in detail recently - reads against heavily fragmented structures.

For writes, it's a different story - the SSD lagged significantly behind all other systems in nearly every write scenario. The same holds true for sequential read patters as well, which aligns with findings elsewhere. On a side note, I did perform some sequential read/write tests with smaller IO sizes (1kb and 4kb) for the data files on each of the systems except the Server #2 system and the SSD performs quite a bit better with these smaller sized IOs than the larger sized IOs that are performed typically in a SQL Server system - seems to follow findings from other reviews I've found and researched a bit on the web. Of course, we really care about how it performs with SQL for these posts, and as you can see, it really is beneficial for smaller, random IO patterns - with the larger and sequential type patterns, it looks like for now most traditional spindle systems will outperform them for now (at least the commodity versions that you can get in a laptop for example, I'm sure some of the solid-state systems built for enterprise deployments are a bit more valid for server scenario type tests, you can find these types of systems by most major storage manufacturers today like EMC, HP, Hitachi, etc.).

Good start to our SSD posts - next I think will be the impact of these drives on fragmentation (since it's fresh in our minds and all).

How to Monitor Storage Performance with a Single Application

Chad Boyd is an Architect, Administrator and Developer with technologies such as SQL Server, .NET, and Windows Server.