To query an Analysis Services cube, MDX is used as the query language. In most business settings, one would find a set of queries that are common across a number of user query requirements. To cater to this, even with a modest size IT team, there is a good chance that the same queries are developed redundantly either within a SSAS MDX script or repetitively in an ad-hoc manner in client applications. In this tip we would look at how to reuse queries without redeveloping them over and over.

Technically speaking, we have an issue of code refactoring and the intention is to centralize redundantly formed queries for ease of use and to improve performance in certain cases. In MDX, a construct is available that serves almost exactly the problem at hand, and it's called Named Sets. I will take it for granted that the reader has a working knowledge of MDX and SSAS.

Named Sets have two types, Static and Dynamic. Dynamic named sets were introduced in SQL Server 2008 and in this tip we will be discussing static named sets only.

Before we start with an example to understand named sets, we should be aware of different query scopes in which we can create and use named sets. Query scopes can be classified in three categories - Query, Session and Global. We will not discuss these scopes in detail as the scope names are relevant enough to reflect the meaning.

Let's say that the IT team has been assigned the task of addressing a number of queries that are used by a number of business analysts. Generally, ad-hoc requirements are assigned in an ad-hoc manner to developers, and these queries are formed in client applications like SSRS reports for example.

As a first step towards addressing the requirements, we should creating a process to track these queries. In the most simple form, one can create an Excel matrix of dimensions vs measuregroups, similar to the dimension usage tab and track each query in the matrix. The benefit is that by tracking queries, one would be able to figure out repeated queries that qualify for named sets or reuse existing queries without spending time and resources to redevelop existing queries. There is no standard template for this purpose, and one can design and develop a tracking sheet that best suits one's IT implementation vs business requirements process.

When a query qualifies to be created as a named set by the tracking mechanism described above, one needs to think of the scope in which the named sets should be used. In my personal opinion:

To create a named set in global scope, you need to define it in the "Calculations" tab of the cube. The benefit of static named sets in the global scope is that they are already evaluated at the time the cube is processed. Keep in view that static named sets help in a limited set of scenarios, where data do not change often, for the rest we can use dynamic named sets. In my personal opinion, if you use a very complex filter criteria in the "WHERE" clause of your MDX query, it's worth considering a static named set. From an implementation perspective, one of the examples where static named sets are useful, is to populate a series of filters/drop-downs across various scorecards in your dashboard. 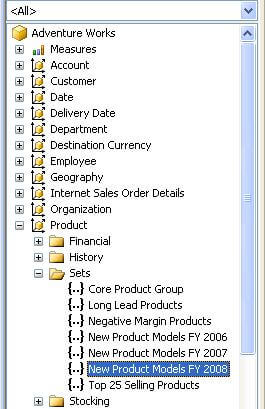