SQL Server 2008 introduced a new feature, Management Data Warehouse (MDW), which allows users to collect metrics on their servers over time to aid in performance troubleshooting. A lot of people try this feature out, because it is easy to set up, and then find that it is not so easy to remove. In fact, removing MDW is not supported; in SQL Server 2012, though, a new system stored procedure was added to make this process easier. The problem is that this stored procedure (as well as several of the workarounds I've seen published) can leave several objects behind.

In order to help understand how to completely remove MDW, I'm going to show the things that it installs, the guts of the new system procedure introduced in SQL Server 2012, what happens when you run that code on 2008, 2008 R2, or 2012, and how to eliminate some of the remnants it leaves behind.

What gets installed with MDW

In order to set up MDW, you open Management Studio, navigate to your server using Object Explorer, expand the Management node, right-click Data Collection and choose "Configure Data Management Warehouse." This will yield a welcome screen. Click Next. On the next screen, you choose "Create or upgrade a management data warehouse": 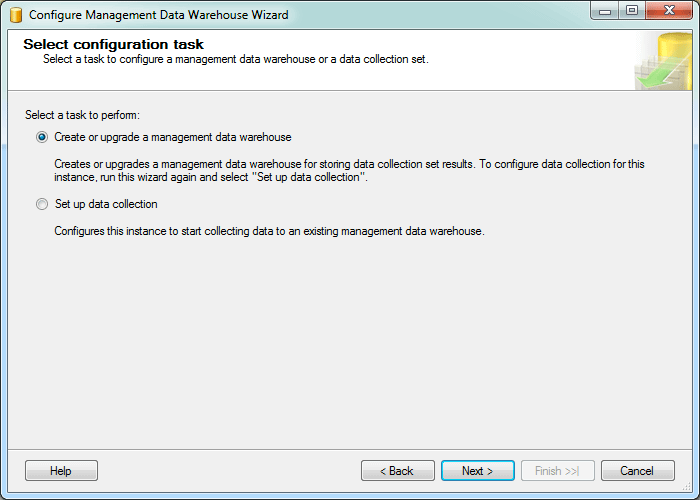 Click Next. On this screen, you pick your server (well, I believe you only ever have one choice here), then you can pick an existing database or create a new one. For simplicity, you should create a new one in this case, and name it MDW: 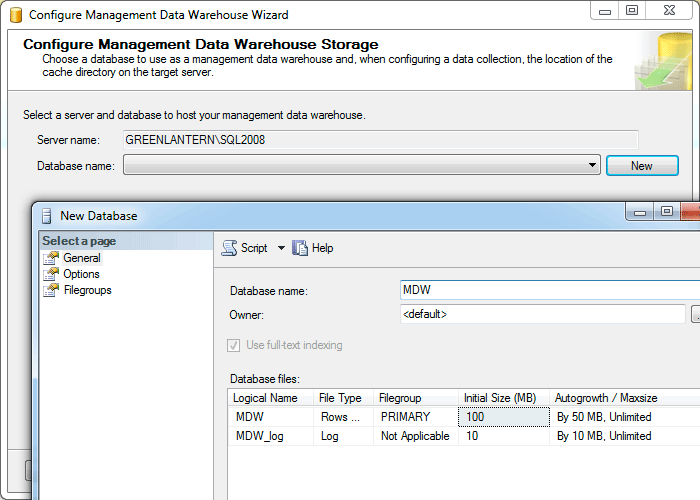 Click Next. On this screen, you can configure logins and users who can access the data in your MDW, but let's skip this step for now. Clicking Next will allow you to click Finish, and after a few seconds you should see a success dialog: 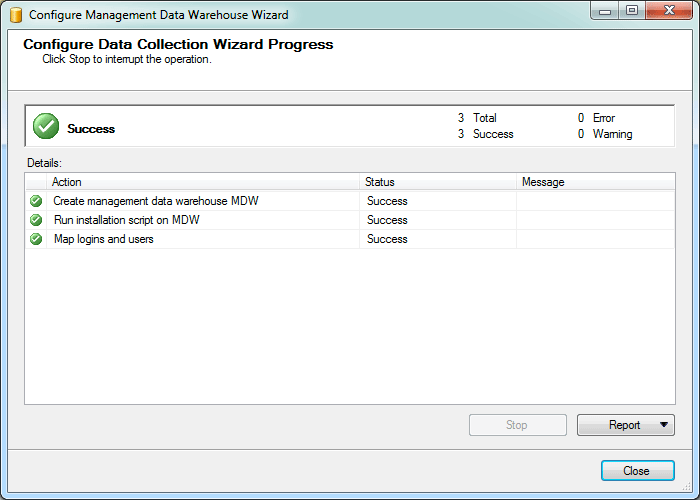 But we're not done yet. This merely created the MDW database and added a job called mdw_purge_data_[MDW], which is used to clean up the data over time. In order to actually collect data, we need to enable collection. Righ-click Data Collection and choose "Configure Data Management Warehouse" again. Click Next. This time choose the option to "Set up data collection": 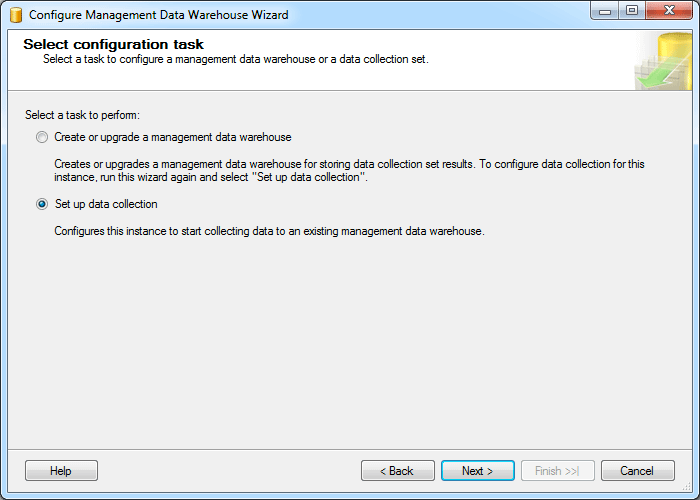 Click Next. Here you'll have to pick the local instance again, and choose the MDW database, as well as specify a local cache directory for files to upload: 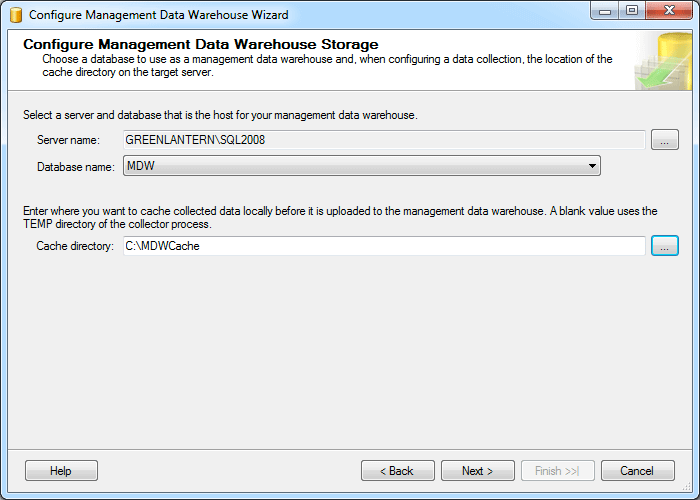 Click Next, then click Finish, and you should see another success confirmation dialog. We can inspect what has been added in Object Explorer (new items marked with red asterisks): 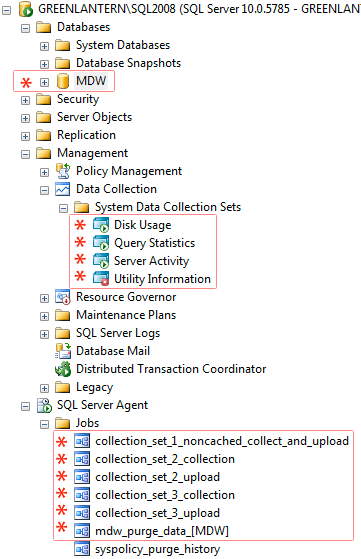 In SQL Server 2012, in addition to all of the above, there are three more jobs that get created, prefixed with sysutility: 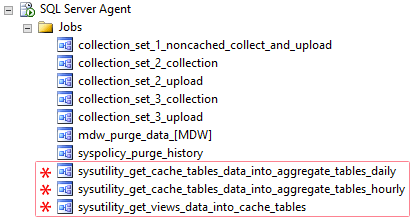 So how do you remove this stuff? Well, you could right-click each Data Collection Set and choose "Stop Data Collection Set", then remove the jobs one by one, but I don't recommend that, mainly because it is tedious. You'll note that if you right-click "Data Collection" your only feasible option is "Disable Data Collection." This doesn't remove anything, it just (very slowly) disables each of the the collection set jobs (oddly, allowing you to continue using each of the enabled Data Collection Sets manually if you want to). Note that this does not disable the mdw_purge_data job or the sysutility jobs. And if you choose "Configure Data Management Warehouse" your only options are still to "Create or upgrade a management data warehouse" or "Set up data collection" - no hint, anywhere, of how to remove anything that you've set up.

In SQL Server 2012, the stored procedure msdb.dbo.sp_syscollector_cleanup_collector was added to provide an alternative to the disclaimer-ridden code offered here. The code inside the procedure (which takes no parameters) looks roughly like this (I've only added the USE msdb; bit):

Running the code on SQL Server 2008

After a casual inspection it seemed to me that there was no reason the guts of this procedure couldn't be run on a SQL Server 2008 instance, so I tried it. It showed the following output: 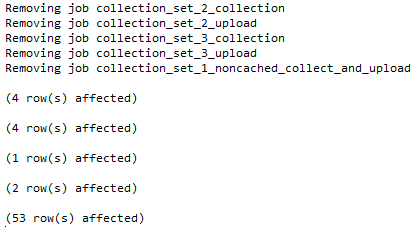 And it seemed to largely put the MDW settings back to the way they were before MDW was ever configured. But as I mentioned before, it did leave several things behind. In SQL Server 2008:

First, run the code from the 2012 stored procedure that I've copied above.

Next, decide what you want to do with the MDW database. I think I'm okay with it leaving the database behind; after all, you may just want to stop collecting data but still be able to analyze what you've collected. So, you could either just drop the database, or back the database up and then drop it at your leisure.

Next, you'll still need to manually remove the mdw purge job. On all versions of SQL Server:

On SQL Server 2012 only, you may want to either drop or disable the sysutility jobs. Here is how you can disable them:

And here is how to drop them (this should also drop their schedules):

You may have noticed that I did not yet provide code for you to delete the collection-related schedules. This was intentional: if you delete these, and try to enable data collection again, it will fail with the following error:

The fact is that, while these schedules may look like they were created by MDW, they are created by default in a default installation of SQL Server 2008 or above. You can delete these easily, if you really want to, and if you are sure you will never enable MDW again. I would still suggest scripting the schedules and saving those scripts to your file system or source control so that you can recover them in the future.

If you run this, please don't say I didn't warn you. The truth is I have no idea what other system functions might ultimately rely on these schedules, now or in the future. The disclaimer should probably also be made for the sysutility jobs, though a difference is that these jobs and their schedules are absolutely created when enabling MDW the first time.

Management Data Warehouse has never been easy to remove; even in SQL Server 2012, the procedure that Microsoft has provided takes care of some of the work, but not all. Using the steps outlined above, you can get that much closer to completely removing all traces of MDW from your system. Note that all of this could still potentially leave behind other items. For example, any logins, users, custom data collections or custom reports that were created explicitly for use with the MDW database. In reality, some of this cleanup might have to be manual by definition, as there is not any predictable way that one could programmatically determine what logins, for example, are intended only for MDW usage.