In my work, random strings are useful in many ways. For example, I want to replace all sensitive information of some columns with random strings after I restore the production SQL Server database to a test environment, or I want to generate dummy data for development purposes. So is there a way I can generate random strings easily?

I have the following requirements for the random string generation:

There are many ways in T-SQL to generate random strings. Here is one good discussion of this topic "Generating random strings with T-SQL".

Generally speaking, with pure T-SQL, we can use Rand(), NewID(), CRYPT_GEN_RANDOM() and Convert/Cast/Substring T-SQL to create random strings.

For string manipulation inside SQL Server, the majority agree that a CLR function will be better positioned. So in this tip, I will provide two CLR functions to meet the above-mentioned requirements.

I will not repeat the steps about how to create/deploy an assembly with Visual Studio, but you can refer to the links in [Next Steps] section to find the details.

In my case, after I build the application to generate a DLL file, which I put it under c:\MSSQLTips\Random_String\bin\ folder, I need to run the following to import the DLL into SQL Server 2012.

We can use the following code to generate some random strings:

Here is the result: 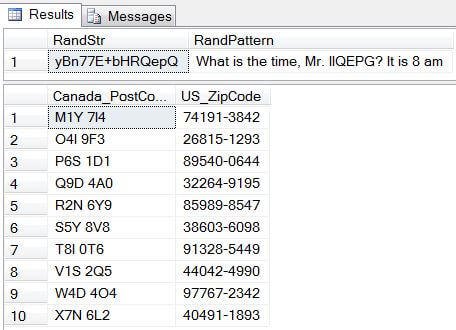 Performance Comparison between CLR and T-SQL

Here I compare the execution of usp_generateIdentifier as seen on stackoverflow.com and my CLR version dbo.ucf_Random_String, I run each 20,000 times and for each 2000 times, I will record the duration as the script runs. The test code uses the same parameters for both the T-SQL Stored Procedure and the CLR function.

Here is the test code:

I put the results into an Excel sheet and graphed the data as shown below:

I like this CLR approach especially because its assembly permission is to set to SAFE, meaning I never need to worry that any future .NET DLL patches will break this CLR code.

Please read the following articles to know more about how to work with CLR functions.

This tip's code has been tested in Visual Studio 2013 and SQL Server 2012 environment. It should be applicable to SQL Server 2008 and above as well.