On very rare occasions, it is possible to receive an error when trying to delete a particular portal site with the SharePoint Central Administration application. The error will read something similar to "STS error receiving information from configuration database." As a result, you will not be able to remove the portal site or its corresponding databases through the SharePoint Central Administration application. To circumvent this error, one can delete the portal site using SQL Server Query Analyzer or SQL Server Management Studio. However, to do so is unsupported by Microsoft and EXTREMELY DANGEROUS TO SHAREPOINT IF DONE IMPROPERLY. This document recounts the successful procedures followed in a past development environment incident and outlines what should be done if it ever becomes necessary to delete a portal site with the SQL Server tools.

As a matter of background, in our development environment, SharePoint Portal Server v2.0 (SPS) is installed in what is referred to as a "Small Farm" consisting of a web server (SHRPNTSVR1) and a SQL Server backend (SQLSERVER1). When SPS is installed, a database is created on the SQL Server backend called SPS01_Config_DB. When an actual portal site is created, (3) databases on the SQL Server are additionally created. In this case, they are called Magic1_Site, Magic1_Prof, and Magic1_Serv. These (3) databases house information for a particular portal site on the SharePoint web server; in our case the MagIC development site, while the SPS01_Config_DB database contains "farm-wide" information (i.e. - what sites use which databases, virtual servers, etc.).

Our group needed to delete the MagIC development site on SHRPNTSVR1 to make way for the restoration of a more updated version of the site, but we were unable to do so in the SharePoint Central Administration application. I decided to employ SQL Server 2000 Query Analyzer to delete the portal site by directly updating the configuration tables in the SPS01_Config_DB. A diagram of the (4) tables involved is shown below. 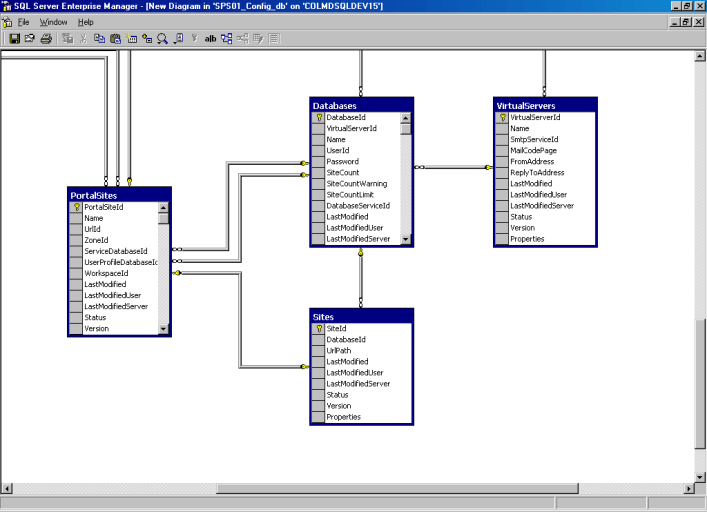 1) First I determined what needed to be deleted by going to the databases table.

From the results shown above, I learned the DatabaseIDs:

2) Taking this knowledge to the PortalSites table, I knew which record to delete and checked for it before deletion.

I then deleted the record in the PortalSites Table.

I deleted all (9) of the sites with the corresponding DatabaseID.

4) Updating the Databases table was my next issue. As seen in section 1, I knew the VirtualServerID for the default web site was AE85EF61-F8AA-48E7-979F-1FEC7FB04B42. From this, I could determine which records to delete in the Databases table. But before I deleted anything, I ensured that no other databases would be affected by this action.

The Name column in the results shows the (3) databases from section 1 that I wanted to disconnect from.

Recognizing the proper databases and seeing that no others would be harmed, I deleted the (3) records in the Databases table.

5) Lastly, I went to the VirtualServers table and determined which records needed to be deleted.

There was (1) record where the VirtualServerID (AE85EF61-F8AA-48E7-979F-1FEC7FB04B42) and Virtual Server Name (Default Web Site) matched my information from Section 1 of this document. I deleted this lone record.