After migrating your SharePoint 2007 content database to your new x64 SharePoint 2010 farm you receive errors when trying to use or activate the SharePoint Publishing feature.

You may never come across this issue, and hopefully you never will, but if you do this post will save you days trying to solve it!

Notes: Same SQL Server Instance is used for both farms.

There are two main upgrade paths to upgrade your SharePoint farm from SharePoint 2007 to the new SharePoint 2010. Basically in place upgrade, you simply install the new version of SharePoint "over the top" and hope for the best or migrate your content databases to a new farm.

I chose to migrate my Intranet content database as my existing hardware was not compatible, ie it wasn't 64 bit.

All was fine, I followed the Microsoft Guide on "Perform a database attach upgrade to SharePoint Server 2010", I ran all the pre upgrade checks with no issues.

I then went to enable the publishing feature on my shiny new "SharePoint 2010 Intranet" and hit my issue.

The issue in detail

The "SharePoint Server Publishing Infrastructure" feature could not activate. I simply received an error message stating the Pages library is already in use, even though it wasn't. Attempting to activate the feature did create the Pages library before coming back with the error - very strange.

A number of hours later, possibly days, I managed to work out that the issue is related to the "Relationships List", it appears it was not "upgraded" correctly during the database upgrade. More details hereÿ- reported against SharePoint 2010 Beta 2, although I'm running against the released product (Version 14.0.4762.1000)

A vanilla SharePoint 2010 install will create a "Relationships List" at the top level site with the following columns:

However a "Relationships List" which has been "upgraded", using the database attach upgrade method will only have these columns: 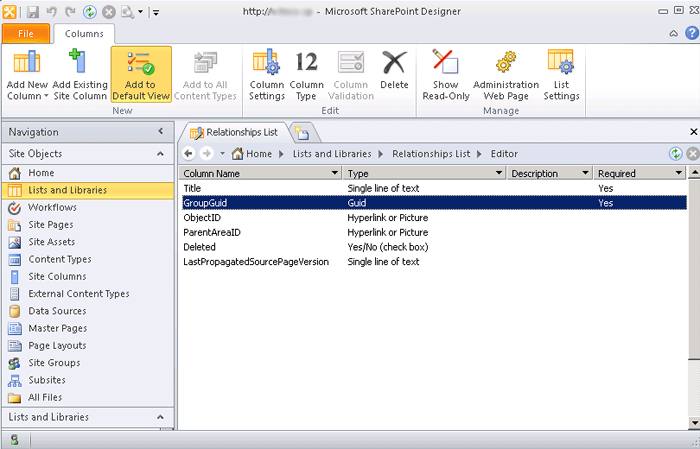 You may not see this issue if you have never used the Publishing feature in your SharePoint 2007 environment. This is because the "Relationships List" is create when the feature is activated.

Knowing this I thought the easiest thing would be to delete the "Relationships List" using SharePoint designer, however this didn't work as the Publishing Feature still wouldn't activate.

I did however manage to activate the feature using the following stsadm commands which fixed the "Relationships List" with the correct columns, however any site that uses the Publishing feature returned the same error.

Having said that using the commands below might fix yours:

After much more research I was pointed towards a "SharePoint Content Deployment Wizard" tool written by Chris O'Brien. The tool allows you to export content from one site collection to another. A guy with the same issue as me has used it to successfully export the "Relationships List" from a working SharePoint 2010 list to a broken one.

Here are the steps he used:

However in my environment the tool didn't work correctly which is why the steps above are slightly vague after step 11.

I have since logged the issue with Microsoft, they have informed me I might have some low level corruption in my content database. Microsoft have also advised I can migrate the content "by hand" using the SharePoint stsadm export and import commands. Not ideal but it did work.

The only "gotcha" to Microsoft's solution is you can not use stsadm commands to export directly from your 2007 farm to 2010 farm. You have to first do the database attach upgrade as I mentioned above, then create a second site collection to import into.

In summary, if you do get this issue, or a similar variation of it please try one of the following:

Taking Control of Checked Out Documents in SharePoint

Running SharePoint Central Administration on More Than One Server

Backup and Restore in SharePoint 2010

How to Migrate a SharePoint List While Preserving its Metadata Properties