When to use SharePoint Feature Dependency

This article deals with the Feature Dependency concept in SharePoint. The article assumes the reader knows how to create a feature. If you want to know more about creating a feature, refer to this msdn article.

What is a Feature Dependency?

Example 1: Suppose there are 5 features which deploy different lists to the web and all of these lists are using a lookup pointing to a master data list at the site collection level. The 5 lists won't work unless the master data list exists. So these 5 features are dependent on the feature which deploys the master data list and its lookup at the site collection level. If a user activates the list features first, the lists won't work since the lookup will throw an error. In order to avoid such a condition, we must use "SharePoint - Feature Dependency".

When to Use Feature Dependency?

(Similar to Example 1 in above section)

Scenario 2 : (Similar to Example 2 in above section)

In such cases, we need to create feature dependency between such features.

How to code Feature Dependency?

For Scenario 1, you need to define dependencies to all collaborative list type features in the TeamCollab feature itself. 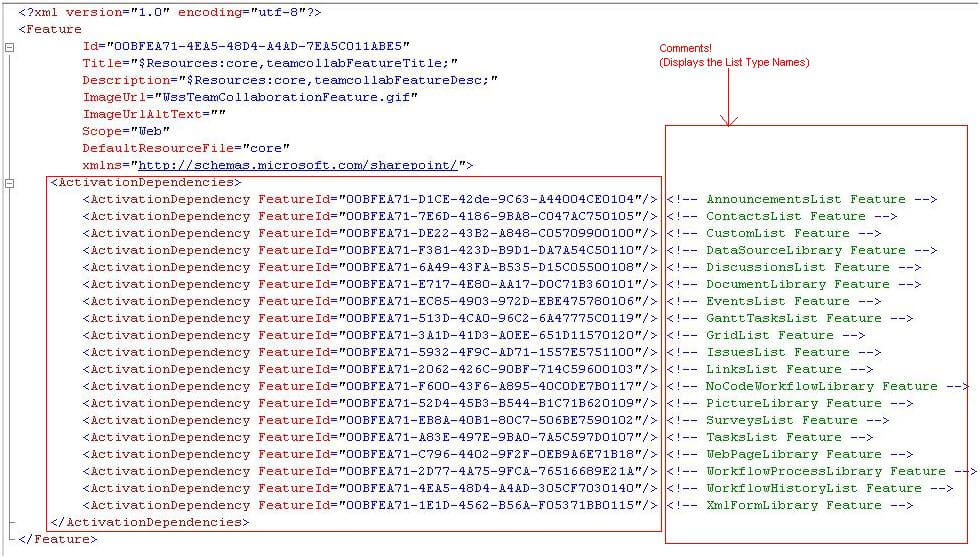 What is the User Experience activating this kind of feature?

When a user activates the Site Content types feature, SharePoint will give a message that there is a dependent feature which needs to be activated and will show the dependent features (i.e. site columns feature). But we can hide this unnecessary message.

Just add Hidden = "true" in the feature.xml of all dependent features...all collaborative list types in scenario 1 and Site Columns feature in scenario 2.

Using XML and XSL in SharePoint

How to programmatically read, add and edit item in a SharePoint list

How to apply Microsoft SharePoint 2013 Cumulative Updates and Handling Issues