This is the third and final part of our ongoing series on SQL Server Database Change Management with Liquibase. In the last two posts (tip 1 and tip 2) we saw how to install and configure Liquibase and rolled out a few database changes with it. We also learned how Liquibase can conditionally apply database changes and how to rollback those changes. Although our examples have been around SQL Server, the concepts remain the same for any supported database platform.

In this tip, we will talk about some use cases for SQL Server Database Change Management with Liquibase.

Browsing through the DATABASECHANGELOG table is one way of looking at your database change history. Another method is to run the dbDoc command. With dbDoc, Liquibase will look through the DATABASECHANGELOG table and changelog file and generate a JavaDoc style html document. This file will show when each database component was created or changed, what changes were made to those components and who made those changes.

In the code sample below, we are running the dbDoc against our liquibase_test database. Note how we have to specify the original changelog file and the path where the document has to be created:

If we browse to the target directory, we will see a number of files: 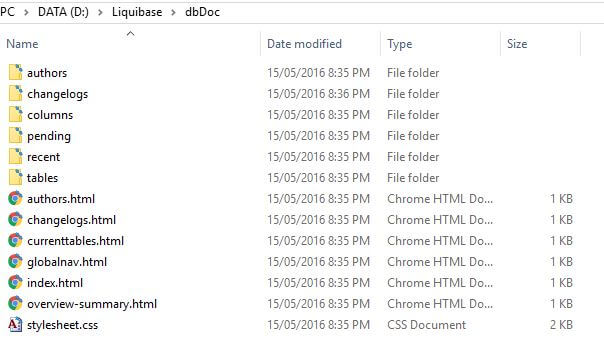 Opening the index.html file in a browser will load the whole documentation. In the image below, we are looking at the history of changes made to the customer table. We can see there are two pending changes here. Note the left side of the page is a navigation pane with links to different objects from the database: 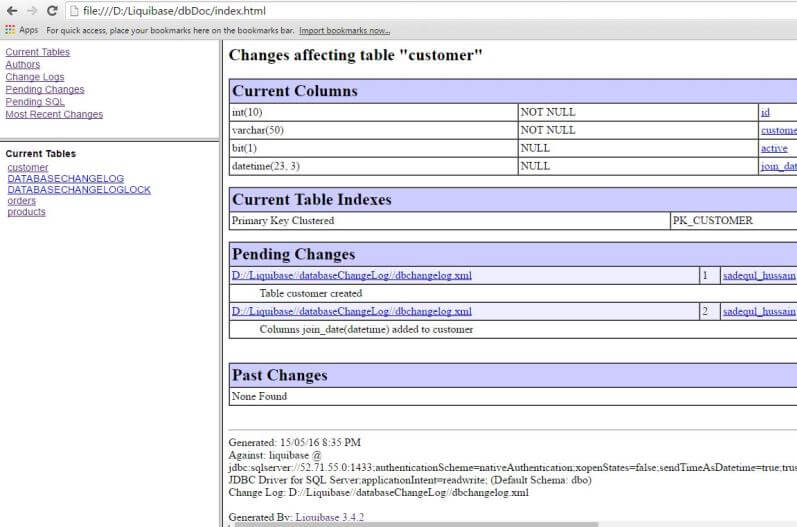 In practice though, the picture will be more like this:

When it's time to run the merged code from the master branch, how does Liquibase know the merged changesets from different branches will not conflict with one another when they try to modify the same object?

So far we have been running Liquibase from the command the prompt only. In the first part of this series, we had added the Liquibase directory to our PATH environment variable. If that has not been set up, Liquibase can be called from a java command with the -jar option. Since Liquibase itself is contained within a .jar file, the command will be like this:

Again, this is a manual process. The command prompt invocation can be somewhat automated by:

Since Liquibase is available for both Windows and *nix operating systems, same principles apply for Linux and Mac OS X; we can create shell scripts that call Liquibase and use that shell script from cron jobs.

Tools like Maven or Ant can also be used to automate Liquibase runs. We won't go into the details here.

Most IT shops with a DevOps workflow would perhaps want to invoke Liquibase from a Continuous Integration (CI) server as part of a nightly build process. In this scenario, Developers would work on the database changelog during the day and check it in to the version control system (VCS) once they are happy. During nightly builds, the CI server would invoke Liquibase which will apply the latest database changes from the master branch to a target environment. Application code can then be deployed in the same environment and a set of basic integration tests can be performed.

Popular CI servers include Atlassian Bamboo or Jenkins (free). Other tools are available from IBM, Microsoft or CA. Although Liquibase has an active community and there is a Jenkins plugin available for Liquibase, it's far better when you consider Datical DB, Liquibase's commercial version. With Datical DB, you get commercially supported plugins like DaticalDB4Jenkins or DaticalDB4Bamboo.

As the database goes through its lifecycle, more and more changesets will be added to the changelog file. When you write your changelogs in XML, even simple changes can take multiple lines. With all the changes being heaped into one file, eventually the file becomes unmanageable. It can take longer and longer to load it in editor, it can seem so complex that you would not know if your changes are going to break anything. Moreover, every time Liquibase runs the changelog, it has to work on every changeset from the beginning: something that will take longer and longer. 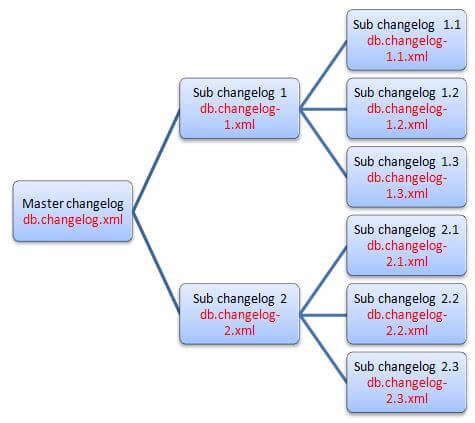 As an example, the following code block shows how we have refactored the original changelog file for our liquibase_test database (you can go through the previous two posts for reference). As you can see, we have included reference to three different XML files and one SQL file here. Each file is a changelog that takes care of a discreet change. When Liquibase starts running this changelog, it runs each included changelog in order. 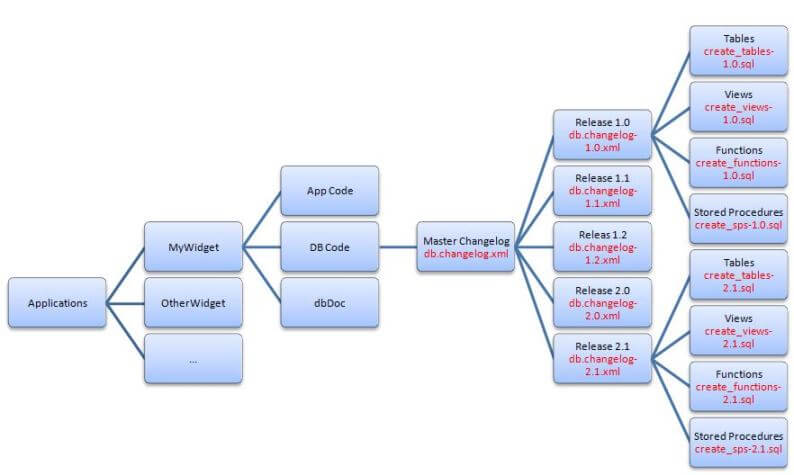 The official Liquibase site lists a number of best practices. We won't rehash them here; instead, we will  list some of the things to make your life as a DBA or developer easier.

There are some limitations to consider when using Liquibase with SQL Server databases:

However, if you think about it, Liquibase was designed with the developer in mind, not the operational DBA. It excels when it comes to creating and maintaining database schema structures, not vendor specific configuration parameters.

By now you should have a fairly good idea about how Liquibase can help manage your database changes. The product is free and available for multiple operating systems, so there is really nothing stopping you from taking it for a test drive. As in the case of most new products, you are better off starting small. In fact if you are working with microservice architecture, it may just be the thing to test Liquibase with.

Microservice architecture is a software development model where a large application is made up of small, independent components with each component performing a specific task. The components are independent in the sense that they can be deployed separately without affecting any other part of the application. For example, a web site can have one component taking care of user registration while another component can take care of password reset requests. Components communicate with each other through defined interfaces for delivering the overall functionality. And being independent, each component may use completely separate database or schema.

Microservice architecture fits neatly with the agile development practice where small changes are iteratively applied to an application. Since each component is small and lightweight, their database requirements are usually small as well. For example, a component may need to access only five tables in a database to store application session data. Managing a small database's frequent changes thus becomes extremely easy with Liquibase.

Having said that, there is nothing stopping you from testing Liquibase with large, monolithic database projects.