This tip will describe the condition to allow caching of temporary table and a demonstration to benchmark the performance between a cached vs. non-cached temporary table.

The conditions to allow caching of temporary table are:

Developers could write efficient queries, but because the temporary table caching feature works internally in SQL Server, it is not easily noticeable unless there is an awareness of this built-in feature and the condition to allow caching of a temporary table.

The demonstration will be using a stored procedure which contains DDL only to benchmark the performance difference. This is also an example use case where caching of a temporary table can provide significant performance improvement on workloads that loop to process large amounts of records concurrently in a few batches. This tip is not stating the example is a good or bad design, but the focus is on demonstrating the behavior of temporary table caching.

All the T-SQL written in this tip is executed on SQL Server 2016 Enterprise RTM.

Two stored procedures are created with DDL definitions only as below:

Query SQL Server sys.dm_os_performance_counters DMV to get the Temp Tables Creation Rate counter. SQL Server service was restarted prior to this test so that counter is showing 0.

Open a new query session and execute the stored procedure dbo.pr_NewTempTable 100 times and check the Temp Tables Creation Rate counter again. The counter has incremented by 100 as a result of temp tables created from each of the dbo.pr_NewTempTable executions. The temporary table is not cached in this stored procedure due to DDL statement on the temporary table.

Execute the stored procedure dbo.pr_CachedTempTable 100 times and this time SQL Server will show the Temp Tables Creation Rate has only incremented by one, because the temp table was cached and reused.

Assume stored procedure pr_CachedTempTable is executed concurrently at the same time in three different query sessions, then the Temp Tables Creation Rate counter will increase by three. If at any point in time the concurrent execution of pr_CachedTempTable is equal or less than three, then you will not see the counter Temp Tables Creation Rate increase. So, SQL Server will automatically create additional cached temporary tables to cater for concurrent requests.

To illustrate tempdb DDL contention, we will open three new query sessions and start the execution of dbo.pr_NewTempTable 10,000 times under each session around the same time. The same test is repeated for dbo.pr_CachedTempTable and the ad-hoc query below.

Below is a screenshot of dbo.pr_NewTempTable execution across three query sessions. All three sessions execution were started around the same time to simulate concurrent execution. 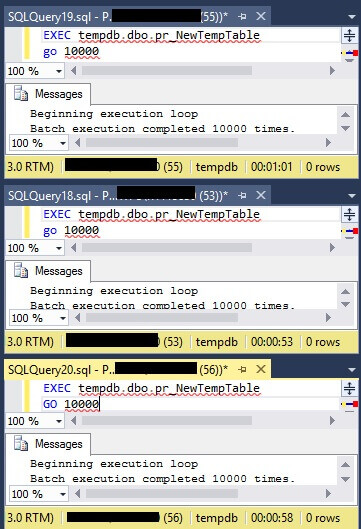 DDL contention occurs when a high number of threads trying to access and update the SQL Server tempdb system catalog due to creation and dropping of temporary tables. This should not be confused with tempdb DML contention which typically relates to contention in PFS, SGAM or GAM pages.