The tip Installing the new SQL Server sample databases Wide World Importers explains how you can install and configure the OLTP sample database WideWorldImporters. Part 2 covered the installation and configuration of the OLAP database WideWorldImportersDW. In both tips, scripts were used to generate data right until the 31st of May 2016. Now we will explore how we can load data right until the current date.

As always, let's start with the OLTP database, since this database will serve as a source for the data warehouse. The process is quite simple. All we have to do is run the stored procedure DataLoadSimulation.PopulateDataToCurrentDate. This stored procedure will generate random sales and purchase data up to the current date, on a day-to-day basis. Keep in mind that if you have to generate data for a long time range, the script can take a while to run. The stored procedure has the following parameters:

On my system, I used the following script:

I choose quite high values for the first three parameters, to simulate a busy period for the Wide World Importers company. When the script is running, you can keep track of the days generated so far if you set @AreDatesPrinted to true. 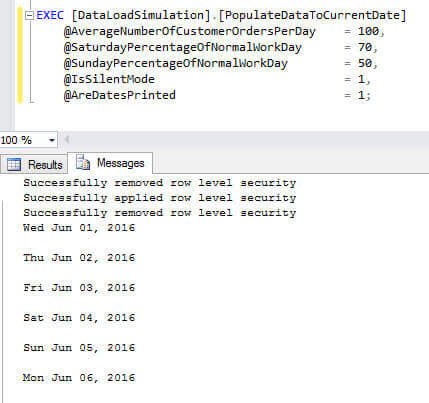 To generate almost two months of sample data, the script took a bit over 11 minutes. If you use smaller values for the parameters, the script will execute much faster. The official documentation estimates about 10 minutes for a whole year.

The data is generated until the day before today. So in the screenshot above the script was run on the 27th of July 2016. This is important for the loading of the data warehouse, as you'll find out in the next section.

The next step is to load the data warehouse. The data will be fetched from the OLTP database, so make sure you have run the script from the previous section. The official documentation suggests to do a full load. Since the entire process runs under 2 minutes, this is acceptable. First you have to run the stored procedure [Application].[Configuration_ReseedETL]. This will remove all of the data in the data warehouse and set the cut off times back to the initial date of the 31st of December 2012. 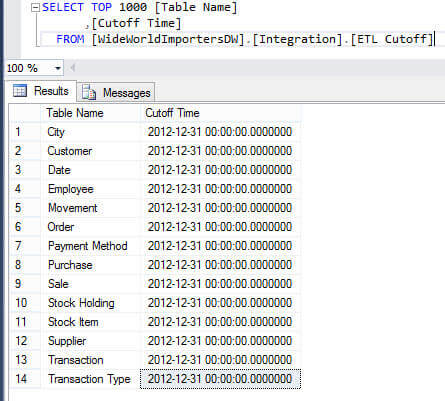 After that, you simply need to run the DailyETLMain package (which can be found on Github) which will bring the data warehouse up to date. 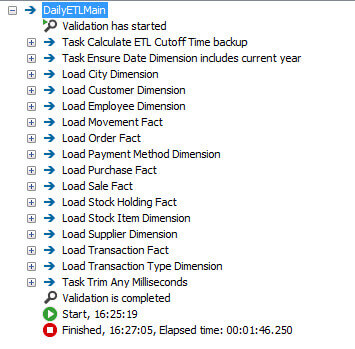 The biggest problem with this approach is that there is no opportunity to build up any history inside the dimension tables. Another method would be to not run the Configuration_ReseedETL stored procedure, but to run only the SSIS package. In this case, the ETL should pick up only the delta changes since the last load. However, at the time of writing there seems to be an issue with the [Integration].[ETL Cutoff] table, where the dates from the last load are stored for each data warehouse table. The problem is that this table stores the point in time when the SSIS package has run. For example the datetime 2016-07-27 15:43:12. But the OLTP load preceding the run of the SSIS package has only loaded data to the 26th of July (see the screenshot in the previous section). This means that the next day, data is loaded until the 27th of July. But since the cutoff time is set to 2016-07-27 15:43:12, you might miss a lot of data. This issue can be resolved by manually updating the cutoff table in order to set the cutoff date to an earlier point in time.

Keeping the sample databases up to date is just a matter of running a simple stored procedure and an Integration Services package. It's easy to schedule those in an SQL Server Agent job. However, there seems to be an issue with the logic behind the cutoff dates - necessary for delta loading - and this requires intervention.