A SQL Server AlwaysOn Availability Group is dependent on the Windows Server Failover Cluster (WSFC) as a platform technology. A fundamental understanding of WSFC is essential to the design and troubleshooting of high availability and disaster recovery in a SQL Server AlwaysOn solution. This tip will explain the function of a Dynamic Quorum in WSFC with some demos and an explanation.

Dynamic Quorum is a feature introduced in WSFC built on Windows Server 2012 and is enabled by default. With Dynamic Quorum, cluster quorum majority is no longer fixed based on the initial cluster configuration. NOTE - Windows Cluster or cluster in this tip refers to WSFC.

Dynamic Quorum allows the Windows Cluster to dynamically recalculate the quorum requirement based on the state of the active voters in the cluster. For example, if a node is shut down, its quorum vote will be removed and not counted towards the quorum. When the node is up, Windows Cluster will then include this node in the quorum calculation again.

One important note is that Windows Cluster does not sustain a simultaneous failure of a majority of voting members at a point in time.

In Windows Server 2012 R2, the recommendation is to always configure a witness regardless of the number of nodes. But in this tip, we will look at the Dynamic Quorum behavior with the quorum type of Node Majority when adding and shutting down nodes in the cluster.

Even Number of Nodes in a Windows Cluster

The Windows Cluster for this tip is built on Windows Server 2012 R2 Standard Edition. Since the cluster is built to host a SQL Server AlwaysOn Availability Group, the cluster will not be configured to have shared storage.

NodeWeight determines whether a node participates in quorum. If you explicitly remove a node from participating in quorum, then the NodeWeight will be 0 and cannot be used by the cluster to determine the quorum majority.

With 3-nodes in the cluster, each of the nodes have a DynamicWeight of 1 which sums to an odd number of 3 votes.

Let’s make the demonstration interesting by adding a node into the cluster. This will then make the cluster have an even number of nodes.

Before adding the new node into the cluster, a simple continuous workload is started on the Availability Group Listener (AGL) to make sure the AGL is online and alive when making changes on the cluster.

When node PTEMP1 is added into the cluster, a report will be generated and PowerShell will prompt for the location of the report. This process is similar to using the Failover Cluster Manager GUI to add a node into the cluster.

Now we will simulate shutting down nodes in the cluster. The primary Availability Group and cluster resource is hosted on PSQL09. So we will attempt to keep PSQL09 alive as the last node and shut down all other nodes. If the cluster node on PSQL09 is shutdown, the AGL will go down even of this is the only node being shutdown.

Next shut down node SSQL09. We now have 2 out of 4 nodes still up. PTEMP1 DynamicWeight has dynamically adjusted to 1. The workload on the AGL is still running and the cluster is still up.

Proceed next to shut down the second to last node PTEMP1. Now the DynamicWeight 1 is set on PSQL09 which is also the last node still up and also the node hosting the primary AG.

If you attempt to shut down the last node PSQL09, you will get an error "Cannot stop node PSQL09, since this would bring the cluster below quorum. To stop the entire cluster use Stop-Cluster."

From the AGL, the workload is still running and the cluster was able to stay up with the last node using a quorum type of Node Majority.

If you startup all nodes, the nodes will rejoin the cluster and recalculate the quorum as shown below. 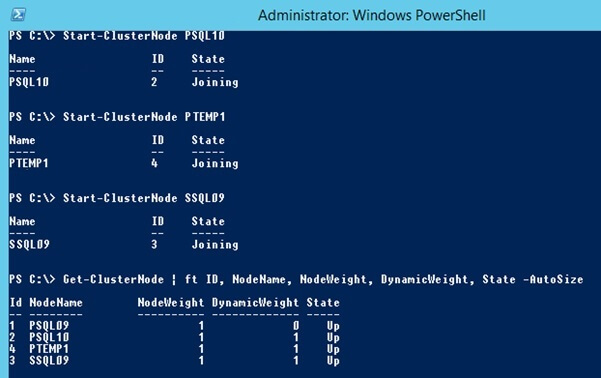 The introduction of Dynamic Quorum has greatly enhanced the resilience of Windows Cluster availability and the way a cluster handles a tie breaker when nodes are split evenly.

Underneath, the cluster uses the DynamicWeight property to determine the quorum majority. So, even in a cluster with even number of nodes, the quorum votes are adjusted dynamically to an odd number so that the cluster can form quorum majority to avoid a split-brain situation. Implementing WSFC might seem easy, but the design consideration can get very complicated when multiple data centers and the public cloud are involved. For example, imagine there are 2 nodes at each site and Dynamic Quorum assigned 1 vote to the primary site and 2 votes to the secondary site. In this example, the primary site will go down when the site-to-site network is unavailable and the secondary site cluster will be up as the primary. Typically it is not an ideal situation to invoke a full DR failover when the primary site is still up and running.

My next tip will introduce another concept called Dynamic Witness and demonstrate the cluster behavior when a witness is introduced in the cluster as a tie-breaker for a 50% node split situation.