PowerShell is an important Windows shell which can communicate with SQL Server to help automate and perform several DBA tasks. Windows PowerShell supports more complex logic than T-SQL scripts, giving SQL Server administrators the ability to build robust administration scripts. In SQL Server 2016 there are some significant changes along with new cmdlets and in this tip we will explore a few of these new PowerShell cmdlets.

Before we move further, let's see the modules available with previous versions of SQL Server 2016 using the below query.

As we can see above, there is a new PowerShell module "SQLSERVER" in SQL Server 2016 as compared to previous versions of SQL Server.

This is an important step towards separating the components from the existing server component set up and can be updated separately without the need for updating the whole server instance.

Now along with this change, there are several new cmdlets as well. To see the cmdlets in the SQLSERVER module run the following command.

It will list all cmdlets for the module SQLSERVER. 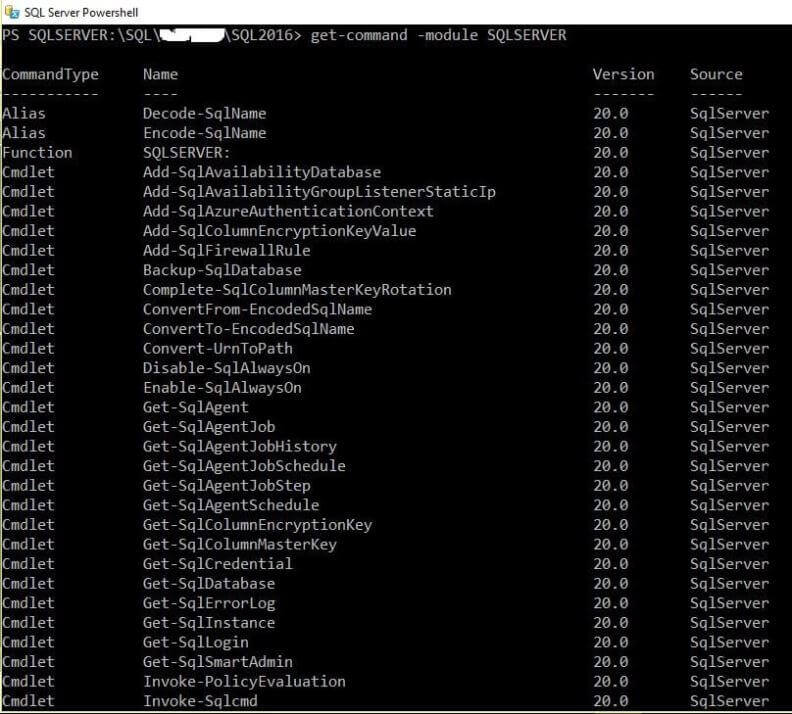 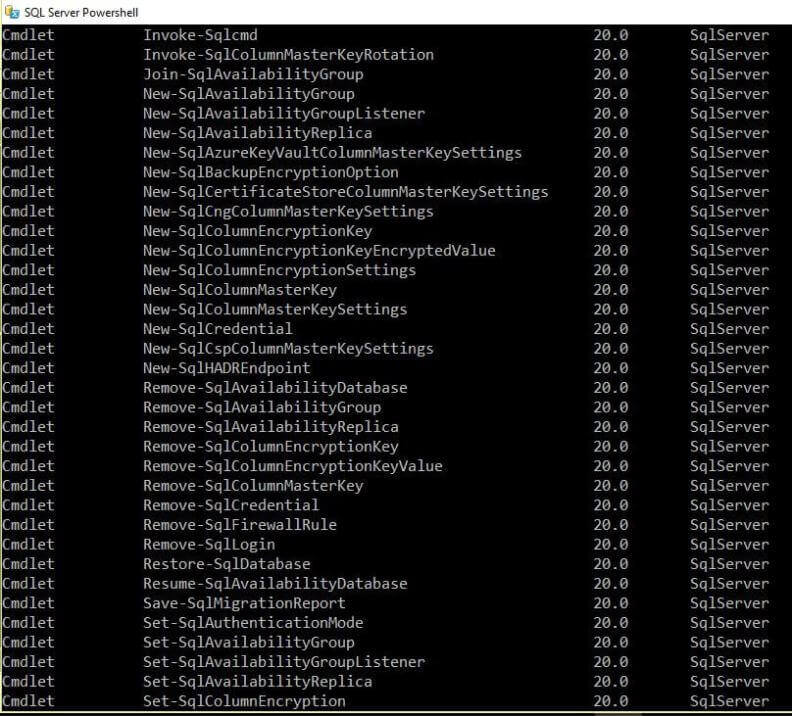 In this tip we will focus on these PowerShell cmdlets for SQL Server:

This is used to get the details from the SQL Server logs. We can filter the error logs with text, dates, etc.

We can get the property and definition of the Get-sqlErrorLog as follows:

1. Get total number of events in the error logs

Here is an example where we look for the word "login".

Out-Grid View parameter opens a new grid view window to easily view the logs. If we want to see the events in the cmd prompt only remove this keyword. 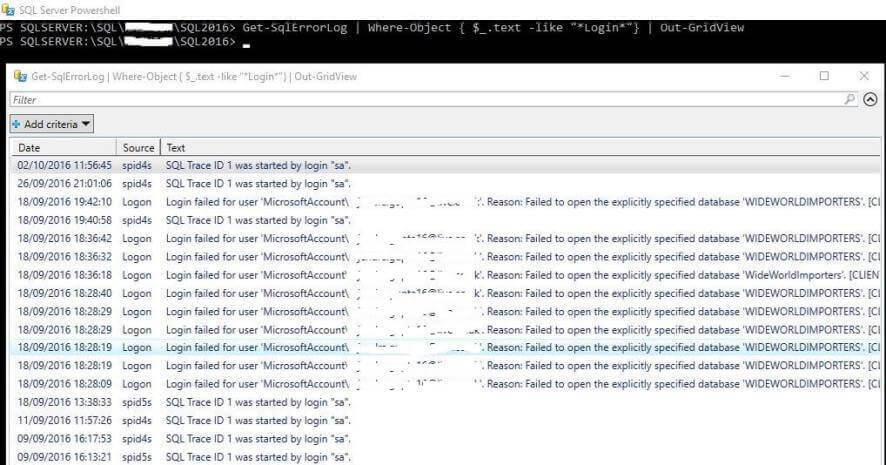 Similarly if we want to filter out with keyword "SQL Server", run the below command. 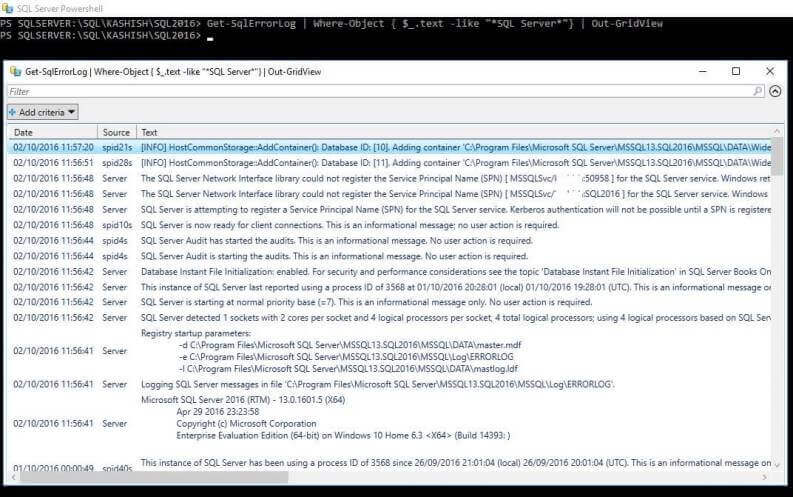 To filter out the logs between two dates we can use the before and after parameter. 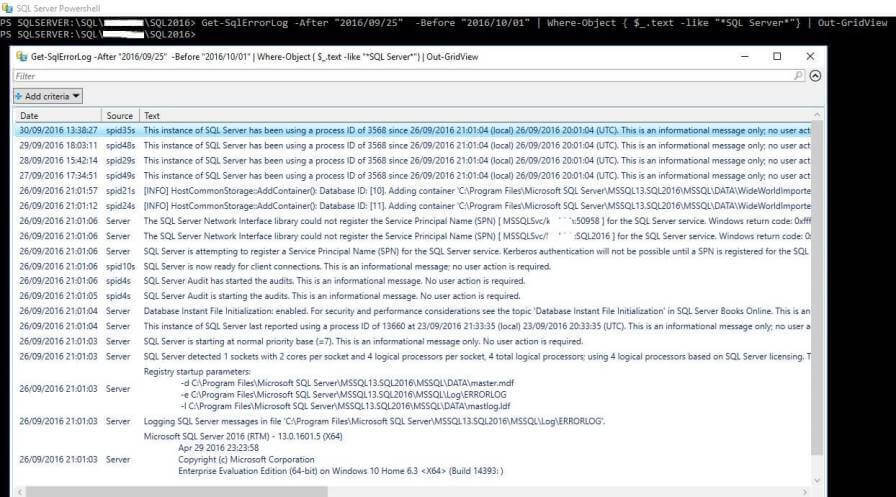 To see error logs after a particular date we can run the below command. 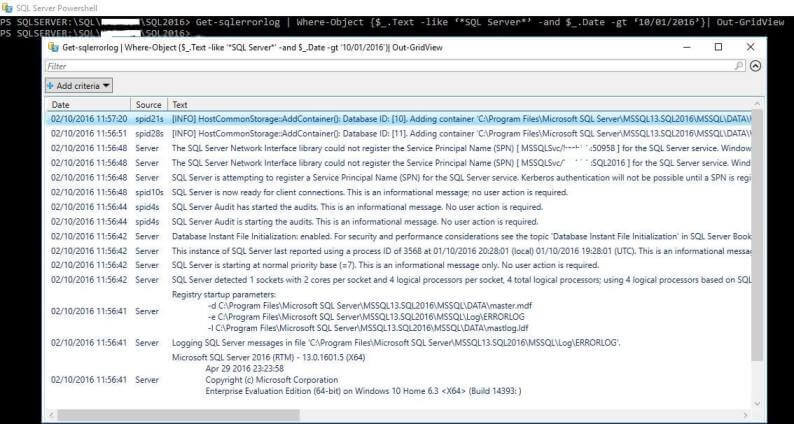 We can configure the number of error logs using this command. The oldest files are recycled whenever a new log file is created. In SSMS, we can change the default number by right clicking on SQL Server Logs and select Configure. 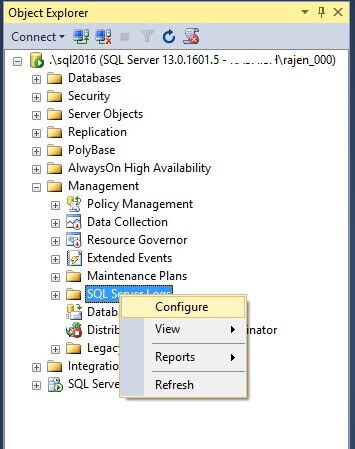 We can enable and select the number of SQL Server error log files between 6 to 99.

We can get the property and definition of the Get-sqlErrorLog as follows:

To limit this using PowerShell, return to the PowerShell command line and write the following:

This will set maximum number of error log files to 10.

We can now go to the SQL Server error log configuration properties and verify this.

If we want to generate a script to set the maximum number of error log files to 12, run the below command.

This will create the T-SQL code to make the change as shown below.

It is very helpful to have these 2 new cmdlets in PowerShell. Explore these PowerShell cmdlets and make use of them. In the next tip, I will explore more cmdlets.

Note: If you have a PowerShell script doing Import-Module SQLPS, it will need to be changed to Import-Module SqlServer in order to take advantage of the new provider functionality and new cmdlets.