From time to time I need to compare data in two tables, which may be on different SQL Servers. For example, in a distributed environment with SQL Server replication, say, we have one central publisher and several subscribers. At a point of time, I want to know whether products of a specific type are updated to be the same price, warranty, specification, etc. at all the different subscriber sites. In our multi-server environment, there are also times when we need to compare tables on different servers that are not part of SQL Server replication.

How to compare data in SQL Server tables (or compare table structures) has been a topic for long time. Other than the TableDiff utility, most solutions are based on T-SQL (see links in the Next Steps section), but they are not flexible enough. For example, I can see the following deficiencies:

Most of the time we only need a Yes or No regarding whether the table records are the same. If Yes, continue our work, if No, we will do some type of reconciliation to fix the issue.

The algorithm of this solution is as follows:

The advantages of this method is that we can parameterize all the criteria, such as SQL Server instance name, database name, query, etc., and most importantly it addresses all the deficiencies of the T-SQL solutions mentioned above.

We will prepare some sample tables and data.

Here is the PowerShell code, you can include this in a module. For easy demonstration purposes, you can just copy and paste the code into a PS ISE window and run it.

After running the script in one ISE window, open a new ISE window and run the following code (assuming the target server and database are the same as the source, so they do not need to be explicitly added here).

You will see that when you run the first cmdlet function, it will return "UnMatch", this is because [Salary] columns are different in dbo.s and dbo.t, one is of data type decimal(8,2) and the other is decimal(9,2), even though both tables have exactly the same count of rows with the same values.

However, when you run the second cmdlet function with parameter -ValueOnly, (comparing values only), we will get a "Match" as shown below. 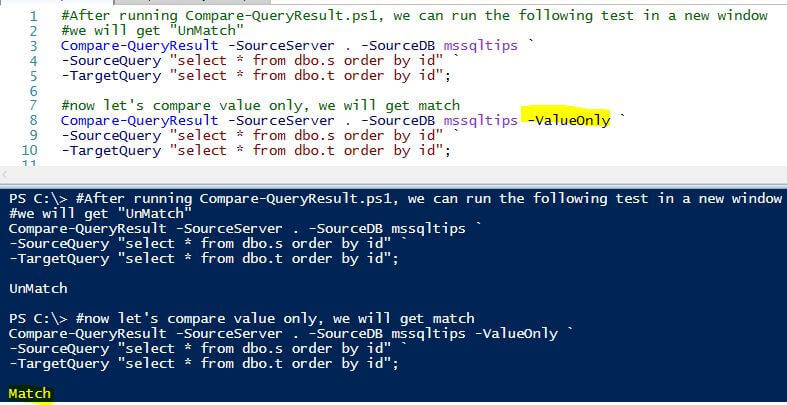 Now let's do another example. We will update one record in dbo.t as follows and then re-run the cmdlet with parameter -ValueOnly and we expect an "UnMatch". Let's see what happens.

Re-run the second cmdlet in the PS ISE Window.

Just as expected, we get an 'UnMatch' as shown below.

There can be a few usage scenarios of this PowerShell function for parameter -ValueOnly:

This tip demonstrates a new efficient way to do table comparison by dumping out the table data into files via the BCP utility and then getting MD5 hash values of the files for comparison. The data files format are controlled by -ValueOnly parameter, if using -ValueOnly parameter, we will use -c parameter for BCP.exe (all columns are treated as character data type), otherwise, we use -n parameter (all columns are treated as native data type) for BCP.exe.

For PowerShell to be more popular among the DBA community, we need PowerShell functions that make some tasks easier than trying to do with T-SQL alone.

You can read the following related articles to see other options:

How to Compare Database Schema in SQL Server - Part 1