More on Recovering Access to a SQL Server Instance

The problem isn't that I wrote the article. The underlying problem is that a user can't manage a local instance of SQL Server, even if they are a local administrator. This could be for a variety of reasons, including any combination of:

If the local Windows account can't administer the SQL Server instance, you could always use sa, right? Well, not necessarily. You may have:

The solution I originally published used a sysinternals tool from Microsoft called PsExec.  PsExec works by impersonating the built-in NT AUTHORITY\SYSTEM login which, in certain versions of SQL Server, has automatic sysadmin rights on the instance. In more modern versions (2012 and above), however, NT AUTHORITY\SYSTEM is no longer in the sysadmin role. This is where the problem comes in. So while PsExec will work against, say, SQL Server 2008 (or an instance upgraded from 2008), how do we solve this problem on new instances of 2012, 2014, 2016, and beyond?

Argenis Fernandez (@DBArgenis) discovered a method that takes advantage of the fact that the Windows accounts for specific services are now in the sysadmin group, even if NT AUTHORITY\SYSTEM is no longer there. And while PsExec can't be used to impersonate these other SIDs, there is another clever way to use them to pass commands into SQL Server.

You can skip past this section if you don't want the background.

To reproduce the problem you are probably already experiencing, I installed an instance of SQL Server 2016 Express Edition, set it to use Windows authentication only, and intentionally left myself out of the sysadmin role. I initially thought you could do this inadvertently using a Next > Next > Next install, but the UI doesn't let you continue without adding at least one Windows account to the sysadmin role: 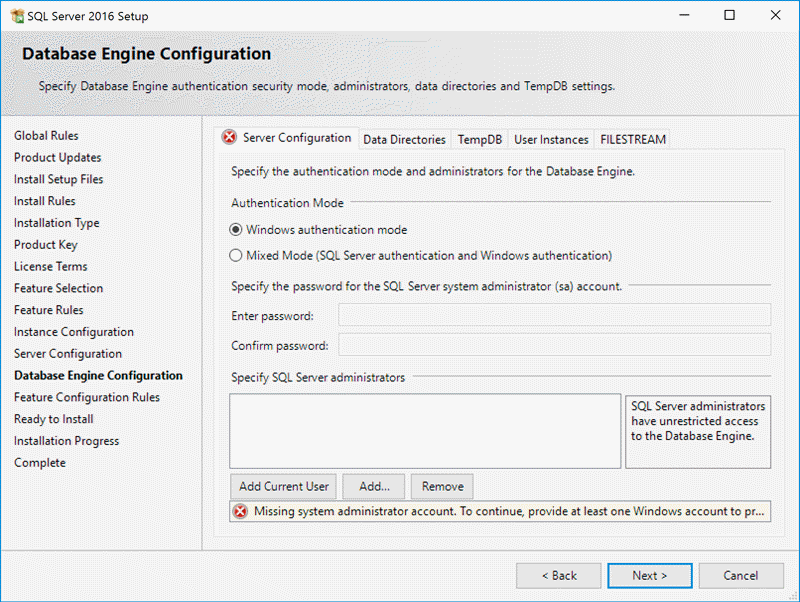 It might be possible to bypass this validation with an unattended installation, and of course that Windows account could later be evicted from the sysadmin role, the instance, or even the domain. What I did here was simply add a different account than the one I was currently using - I was installing using Gordie\Administrator, but I created a throw-away account called GORDIE\floob, and added that account to the sysadmin role instead. You can see this from my installation summary screen:

Even though I didn't add myself to the instance, I was able to connect implicitly (through Builtin\Users):

(The only logins I can see, though, are the disabled SA account, and Builtin\Users.)

And I was even able to add myself as an explicit login:

But when I tried to add myself to sysadmin, I couldn't:

Msg 15151, Level 16, State 1
Cannot alter the server role 'sysadmin', because it does not exist or you do not have permission.

And in fact you will quickly find that even a local or domain administrator can't get a lot done here, if they didn't add themselves to the sysadmin role during setup.

Again, with full credit to Argenis, here is how I can recover access to my instance. His solution relies on the fact that newer versions of SQL Server use service SIDs that are somewhat "vulnerable."

First, let's look at the accounts that are vulnerable (to verify this yourself, you'll have to run this on an instance where you do have elevated privileges):

On a default installation of SQL Server 2016, you should see the following four results (though the last one, belonging to SQL Server Agent, won't be present on SQL Server Express):

As a regular user, you won't see those logins in the results, but you'll have to trust me that they're there (unless they have been sabotaged).

But what can we do with this information? I'm cheating a little bit here, because I already know the answer. I'm not interested in messing with the Winmgmt service, and I obviously don't want to touch SQL Server or SQL Server Agent. This leaves SQLWriter as something to explore, so let's take a look at the properties of the service. Launch services.msc, scroll to the SQL Server VSS Writer service, and right-click for the properties: 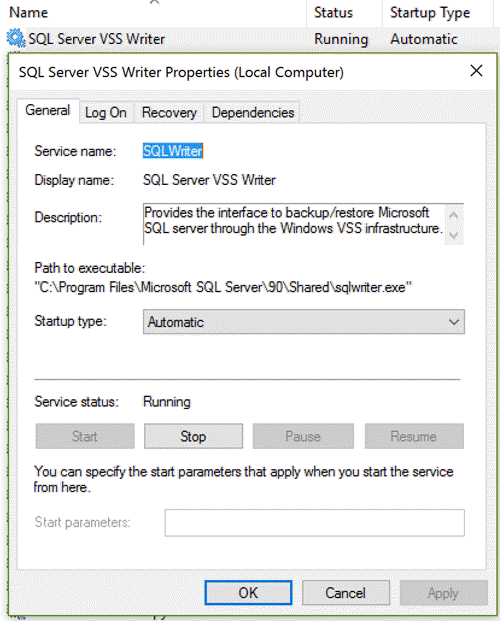 This solution will involve stopping the service, so you may as well do that now. The important thing to note here is the folder location of the sqlwriter.exe application.

Now, about the sqlwriter.exe file: this is associated with the SQL Server VSS Writer service, which uses NT SERVICE\SQLWriter, which in turn has inherent sysadmin privileges on the local instances of SQL Server (as shown in the above query against sys.server_role_members).

Well, what if we shut down the service, and replace that sqlwriter.exe file with a file we can use to pass commands into SQL Server? Say, sqlcmd.exe? Go ahead, and stop the service. (Keep in mind that if you are using any 3rd party backup solutions that rely on the service, you should suspend their activities as well.) Now, copy sqlcmd.exe from the following location (you may have to change 140 to something else, depending on the highest version of SQL Server you have installed):

Paste that file into the folder alongside sqlwriter.exe, which should be:

The final configuration change involves modifying the registry to slightly change the command that the service uses to call the executable. Open regedit.exe and navigate to the following location:

Initially, the ImagePath is specified as:

Since that exe file is actually now sqlcmd.exe, we can pass in arguments! For example, we can tell it to connect to a specific instance, using Windows authentication, and run some arbitrary command, like adding my Windows account to the sysadmin role:

So, right-click the ImagePath key, choose Modify, append the command, and click OK. Here's how it should look (enlarge):

The final step is to start the SQL Server VSS Writer service, which will fail, and that's okay. Windows can't start sqlcmd.exe as a service, but it is trivial to verify that the command was sent on to SQL Server, and that my Windows account is now part of the sysadmin server role. It will be one of the names now returned by this query (and I will suddenly be able to see other sysadmin members):

This looks on the surface to be a security hole but, in order to swap out the files in that folder, you have to be an administrator on the box where the instance resides. And in a lot of ways, if someone is a Windows administrator, you should consider them the owner of the instances and services on that machine anyway (see this other post from Argenis for more on that).

What else can I fix?

Some other commands you may want to run this way, depending on what issue you want to fix:

You'll just have to change the registry each time so that a new command is sent, and then try to start the service again. You could append a whole slew of commands, but that single-line entry in the registry editor is not exactly easy to work with.

Argenis has come up with a great workaround to recovering access to an instance, which only requires an outage of the VSS Writer service (other solutions require some level of SQL Server outage). I hope this comes in handy if you should find yourself locked out of an instance of SQL Server 2012, 2014, 2016, or beyond.