I am a SQL Server Developer who recently migrated to a team with data integration production and monitoring functions. A prior MSSQLTips.com article gave me a useful introduction to creating single-step SQL Server Agent jobs, but I am now ready for some examples of multi-step SQL Server Agent Jobs. Also, I would like to see jobs demonstrating how to conditionally branch around some steps.

A SQL Server Agent job can have up to hundreds of steps to meet a business requirement. It is often useful to build a solution in parts. Then, the total solution can be implemented as a multi-step job with each part of the solution running in a separate job step. The tests for each part of a solution can be thought of as unit tests, and the total solution test consisting of all parts can be thought of as a system integration test.

Two-step SQL Server Agent jobs are the most basic example of a multi-step solution. When running a multi-step job with any number of steps, you must specify what to do after the success or failure of each step. For example, if a job step fails or raises an error, you may care to quit the whole job, ignore the job step failure and progress to the next step, or ignore the job step failure and progress to another step besides the next step (for this option you will need more than a two-step job). With features like these, SQL Server Agent offers capabilities for guiding the flow of steps within jobs.

In a prior tip for SQL Server Agent, a single-step job was created to insert a row into the RecordsNumericandDateTimeValues table every 5 minutes; the table resided in the for_SQL_Server_Agent_jobs database. Each insert included two columns of data: the numeric value of 1 and the datetime value when the insert took place.

The following screen shot shows the Steps page for a job named Create a two-step reporting job. This job is a very simple extension of two single-step jobs from the prior tip. The first step creates the summary table named InsertsPerDay, and the second step populates the summary table. The InsertsPerDay table is freshly created and populated each time the Create a two-step reporting job is run from its first step. 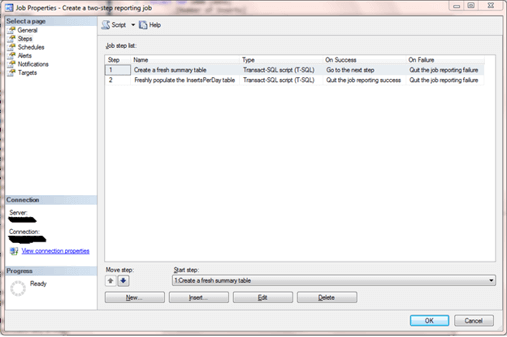 By combining the two single-step jobs into one two-step job, there is no opportunity for another database user or process to drop the InsertsPerDay table after it is created and before it is populated by the second step. This is because steps can succeed one another immediately upon the completion of a prior step.

Notice from the preceding screen shot that the On Success column for the first step indicates the job is to progress to the next step after the successful completion of the first step. When you are creating a job step, you can select from any of a set of options based on whether the job step succeeds or fails. These options can be exposed from the Advanced page for a job step. You define a step in the General page, and you set various advanced options, such as how to respond after a step succeeds from the Advanced page. The following screen shot shows the selection of the Go to the next step option after a step succeeds for the first job step. 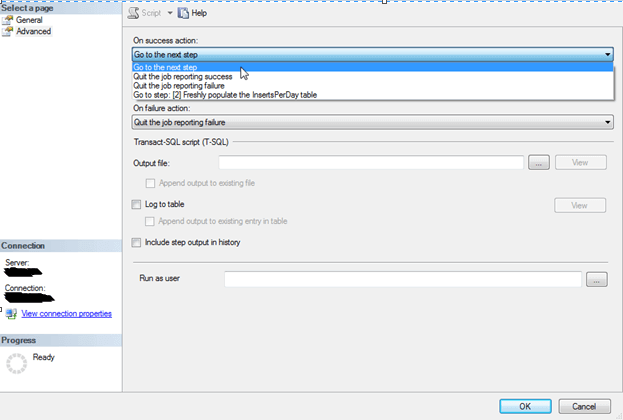 The following two screen shots show the T-SQL code for each job step in the Create a two-step reporting job. Each dialog displays in its title the name of the job step for which it displays code. 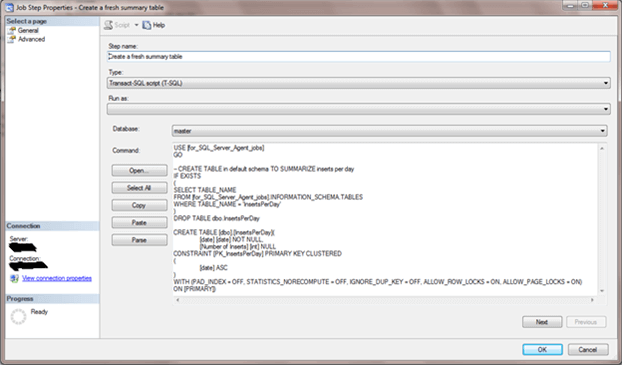 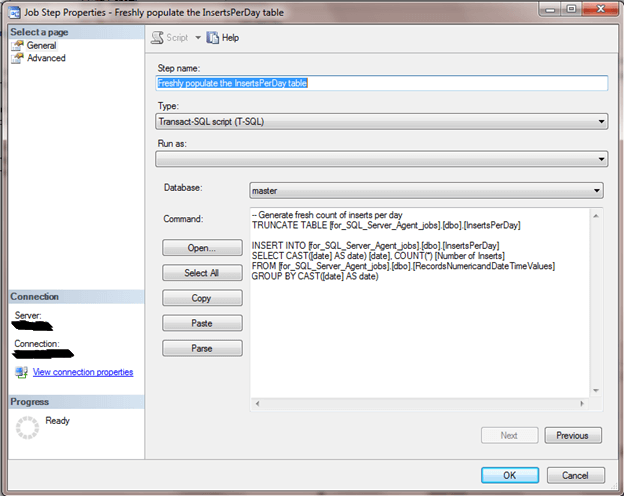 The next screen shot shows the schedule dialog for the Create a two-step reporting job. This dialog applies to both steps within the job. SQL Server Agent's graphical user interface does not natively support different schedules for different job steps. As soon as one step completes successfully or fails, a multi-step job uses the On Success or On Failure settings to determine what to do next. When a multi-step job is launched by its schedule, the job always commences from the first step. 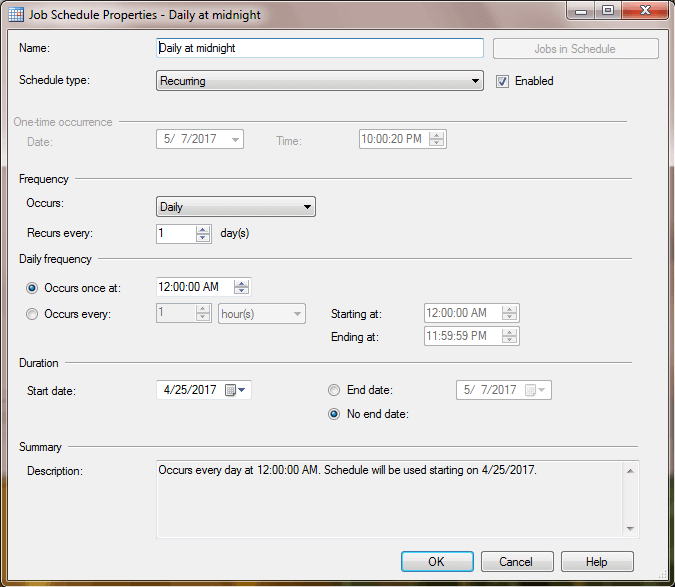 Even when a multi-step job has a schedule, you can still run it manually at any time. This capability is especially useful for debugging job steps as well as for recovering from a failure from one step in a job without having to run the whole job from its beginning. When starting a multi-step job manually, you can choose to start the job from a different step than its first step. For example, if you knew that the InsertsPerDay table already existed, you could start the Create a two-step reporting job from its second step.

When you run a multi-step job manually, you have to specifically select a step from which to start before clicking the Start button in a Start Job dialog. You can show the Start Job dialog by right-clicking the job in Job Activity Monitor and choosing Start Job at Step command. Next, you highlight a step name and click Start; this starts the job from the selected step. The following screen shot shows the steps in the Create a two-step reporting job with step 1 selected just before a click to the Start button. 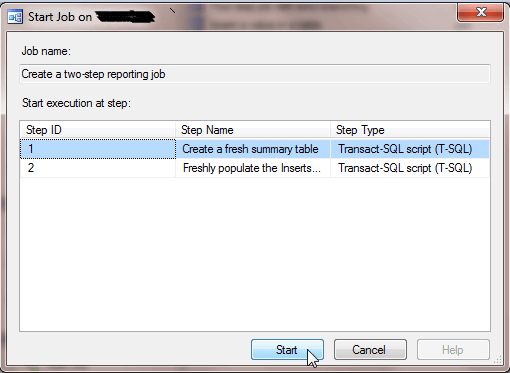 To demonstrate the Create a two-step reporting job, an underlying job for inserting rows into the RecordsNumericandDateTimeValues table was started at the beginning of a five-minute interval after 10:40 PM on May 20, 2017 (2017-05-20 22:40:00.633). Then, the job was allowed to run until slightly past midnight on May 20, 2017. Midnight is a critical time for the Create a two-step reporting job because its schedule causes it to operate daily at midnight. 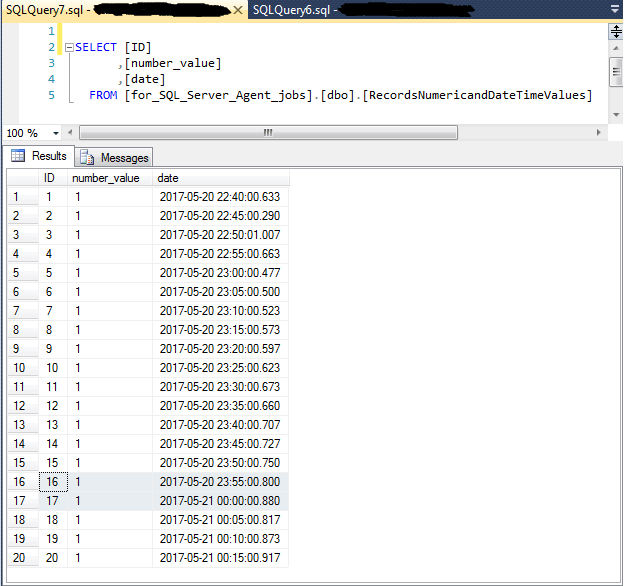 A multi-step job catches errors within each job step. Recall that you configure responses to errors for each step through the On Success and On Failure settings for a step. Errors can be the outcome of some error condition, such as an unresolved contention for a resource, undefined objects caused by the dropping of an object, or even just a RAISERROR statement. By wrapping a RAISERROR statement within an IF statement, you can conditionally raise an error. When the condition for the IF statement is true, the error is raised. When the IF statement condition is false, then no error is raised.

The capability to conditionally raise errors within job steps and configure job flow from a step differently based on the success or failure of a step allows you to conditionally control the flow of job steps at run time. The job described within this section demonstrates one approach for implementing this kind of conditional job flow. The sample job uses a day-of-week setting as the basis for the IF statement condition.

The following screen shot shows the General page of a job named "Four step job with error branching". This job implements conditional branching based on a RAISERROR statement within an IF statement. The job has four steps: 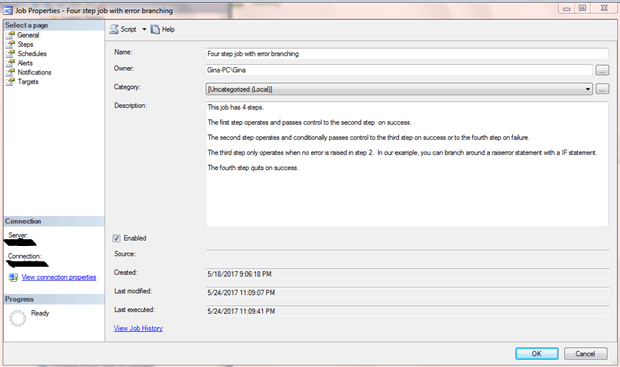 The combination of the On Success and On Failure settings for the second step enable conditional job flows between steps depending on if an error occurs in the second step. 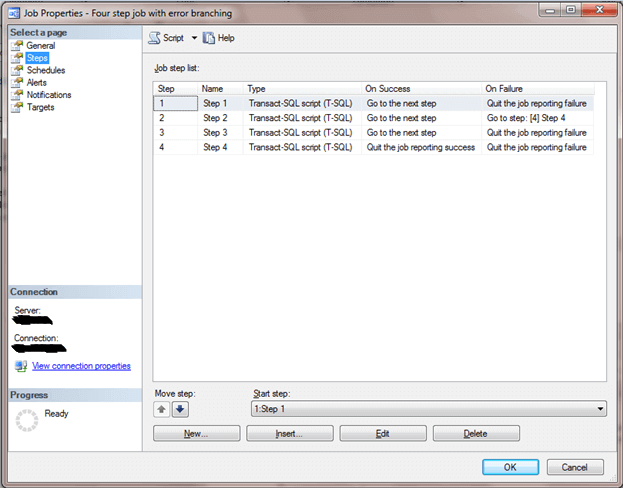 The next screen shot shows the Command entry for Step 1. There are five elements to the script. 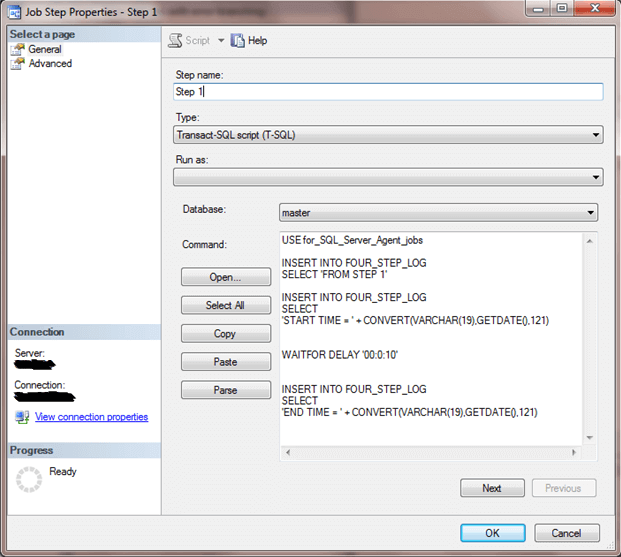 The code for Step 2 shows in the Command box of the Step 2 properties dialog below. This step has a general design that is similar to the other three steps, except it conditionally raises an error based on the day of the week and it records the name of the day that it writes to the log. Here's a summary of the six elements in the code for Step 2. 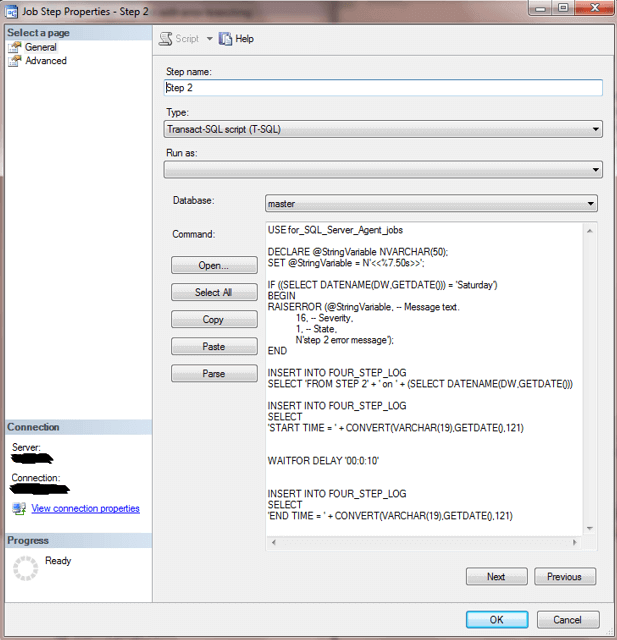 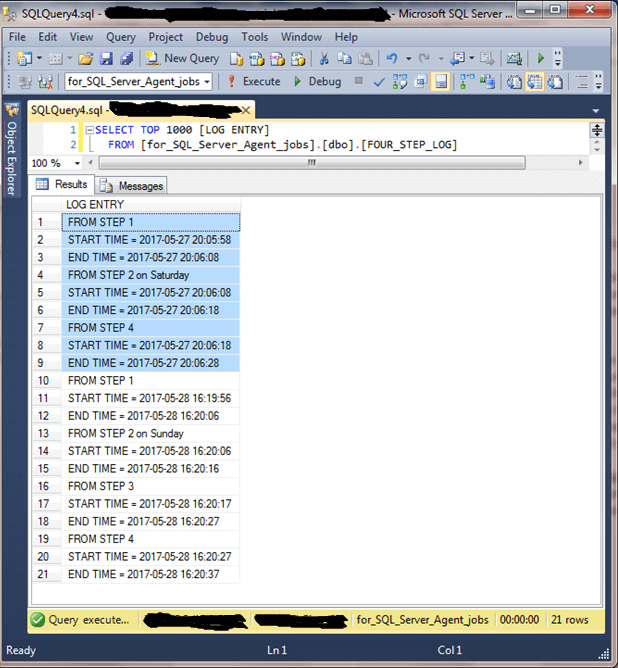