I have a need to decrease the time my SQL Server database backups are taking to run.  I thought about trying to run multiple backups at the same time to see if that would work.  I could have created multiple SQL Server Agent Jobs to run at the same time, but I wanted a more dynamic way to handle this, so I created a PowerShell script that allows processes to run in parallel.

With PowerShell you can spawn multiple threads to run tasks simultaneously. By implementing this approach using PowerShell, I was able to cut down a process that took over an 1.5 hours to a little over an hour.

Please note that this script was only possible thanks to an article titled “True Multithreading in PowerShell” written by Ryan Witschger (link here).

Attached is the full PowerShell script and although several lines are self-explanatory or documented inline, there are others that I want to elaborate.

Here are the variables in the script:

Most of these have comments or should make sense, but I wanted to point out these:

This is a list of actions to be performed on every database that is returned from sp_databases. The database name is put inside variable Args0 which is used in the task scriptToRun parameter.  The tasks I am performing are as follows:

These are the steps that I do in my environment, but you can configure this based on your needs.

Inside each task we have the following:

Let's take a closer look at the first task I have setup for the backup.

The values I am using are:

For the scriptToRun I am using sqlcmd to run a BACKUP DATABASE command. Here are the dynamic values used.

The sqlcmd options are:

For my test I had the following:

I opened the script using the PowerShell ISE. After adjusting the variables in the script to meet my needs, when this is run this is the output from PowerShell.

Here is the comparison between the serial job which is using a SQL Server Agent Job to backup one database at a time, then copying the files and then deleting the local copy.  You can see this took 1 hour and 31 minutes.

Here is another SQL Server Agent Job, but this time using the PowerShell script. I used a maxThreads count = 4.  This took 1 hour and 9 minutes to run. 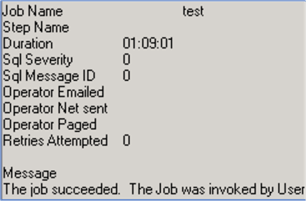 Pablo Echeverria worked for more than 10 years as a software programmer and analyst. In 2016, I switched jobs to a DBA position, where I have implemented new processes, created better monitoring tools and grown my data scientist skills.