In this tip we’ll use the WideWorldImporters Tabular model, which was created in the tip Using Calculated Tables in Analysis Services Tabular 2016 for Aggregate Tables – Part 3.

The new ERROR function allows you to raise your own error messages. Let’s suppose we want to calculate a sales amount measure in the WideWorldImporters model:

However, it’s possible someone enters a unit price which is incorrect. Assume the company doesn’t sell items with a unit price over $1,000. We can embed some validation inside the formula which checks if the unit price doesn’t exceed the $1,000. If it does, an error is thrown so users are notified something is wrong with the source data.

If we would use the measure in Excel, we get the following result:

In Power BI the whole visualization errors out. You have to click on See Details to get the error message:

This function will most likely be useful as an intermediate step for other, more complex formulas. GENERATESERIES generates a sequence of values with a start and end value. Optionally you can specify the increment. The output of the function is a table holding the sequence. 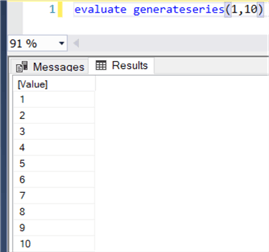 With an increment value of 2 specified: 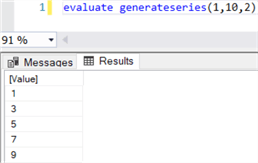 You can also use other data types, such as decimal number or currencies. Dates are supported as well: 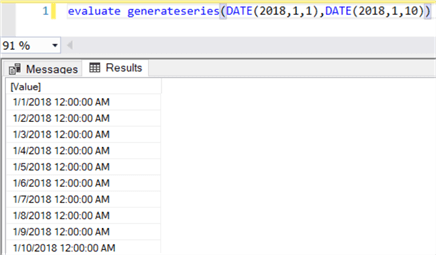 In this case, the result is similar to the CALENDAR function.

A nice addition to DAX is the IN operator, which in its simplest form is equivalent to the T-SQL counterpart. Let’s calculate the sales for two sales territories: 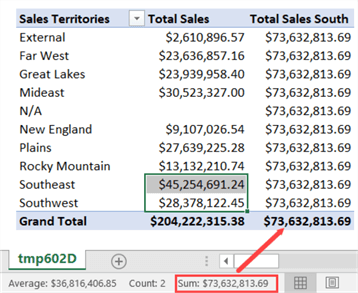 The CONTAINSROW function is equivalent to the IN operator:

We can verify this in the PivotTable:

Unlike T-SQL, there isn’t a NOT IN operator. In DAX, to have the logical negation of the IN operator, you need to put the NOT function in front of the entire expression:

Which yields the following result: 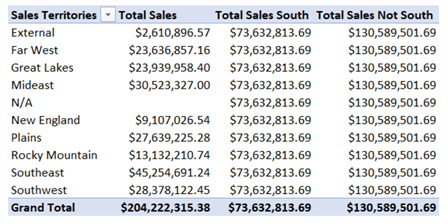 You can also use multiple columns with the IN operator. For example, let’s calculate sales for November 2016 and October 2015.

Like GENERATESERIES, the SELECTEDVALUE function will most likely be used in more complex formulas and not on its own. The function returns the value for a column when a single, distinct value has been selected (or filtered). If it isn’t, you can supply an alternative result with an optional parameter. Let’s test this with a simple formula:

In a PivotTable, this gives the following result: 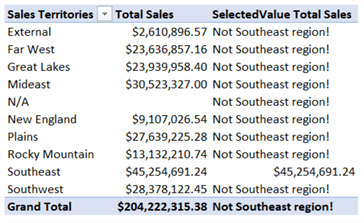 You could also use the formula to validate the input of a slicer. For example, only show a value in a visual if a single value on the slicer is selected:

If one value is selected on a slicer, the result of Total Sales is shown:

If nothing is selected, the slicer defaults to All, and the formula returns N/A:

In Power BI Desktop, even when the slicer is configured for single selection, you can select multiple values when holding CTRL while clicking. With the formula, we can validate the input:

This function is a bit more special. TREATAS applies the result of an expression as filters to columns of an unrelated table. Let’s illustrate with an example. The Order table contains two dates: the Order date and the Picked date. Since Tabular doesn’t support two relationships to the same table, we need to create another date table for the picked dates. We can easily do this with a calculated table: 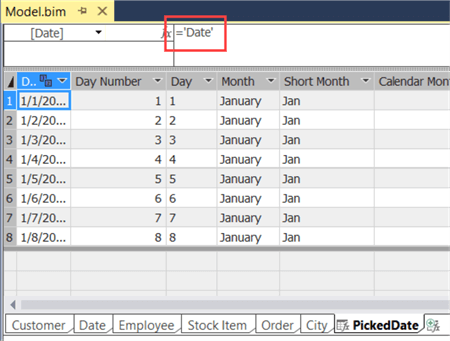 This expression simply takes a copy of the existing Date table. Then we need to create a relationship between the new PickedDate table and the Order table: 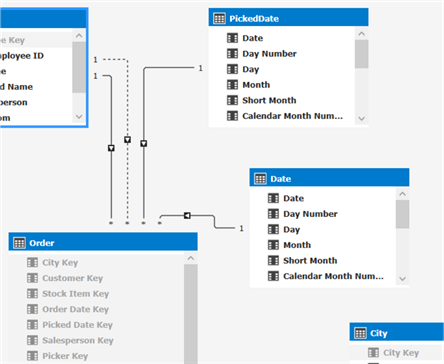 Now we can use TREATAS to apply the filter on the Order date years to the Picked date years:

If for example someone filters the orders for the year 2015, the formula returns the following result:

Orders at the end of 2015 which were picked in 2016 are excluded. In Excel we get this result:

As you can see, the result with TREATAS as a bit lower than the full total sales for a year, since some orders are picked in the year after. The grand total is a bit less as well, since there are blank values for some picked dates (which signifies orders which haven’t been picked yet).

Some smaller additions to DAX: