You have several SQL Server tasks already running and working on Windows and now you want to repeat those SQL Server tasks in Linux. For example, you would like to kick off a restore of a few databases. But how? Here are some script ideas to get you started.

Linux shell scripts are easy and flexible, when you know how. This tip is a step by step example for you. In this case we will use a Linux ‘shell script’ to control along with sqlcmd and then automate it. The Linux sqlcmd is like the Windows version. See this tip if you are unfamiliar with sqlcmd.

VIP: Go one step at a time. If a step does not work re-read it and try again.

Log into Linux and run this command to see if you have the SQL Server tools installed.

And follow this tip to add the folder to your PATH environment variable.

This command will tell you where sqlcmd exists.

The response will most likely be:

Here is a simple script.

Tips: The #!/bin/bash is a convention in script writing. It shows where the shell you are using is located.

The other lines beginning with # are comment lines. Name your scripts at the top and save them first in an organized folder. Then add the code. I find that order of doing things clarifies your scripts purpose and keeps you on track.

You can use another user rather than sa, but we will be restoring some databases and so we will use sa.

Save the file. Then run that command by:

Or make it executable by the chmod command: 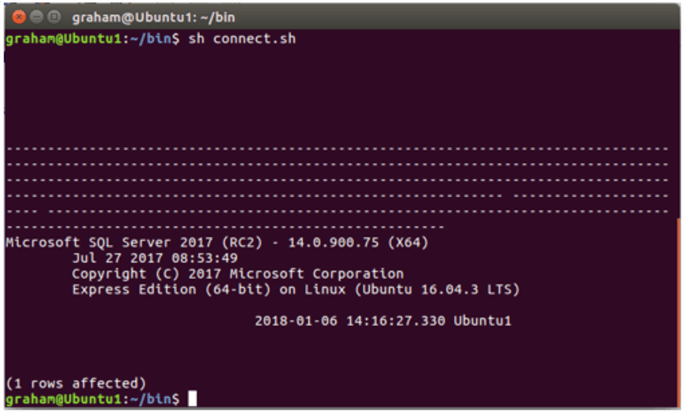 Success! We can see the version, date and instance name. We know sqlcmd is installed and working and we have a valid username and password.

Tips: Note that the ~ or tilde indicate the path to your login folder. So ~/bin means your local bin folder.

Step 2 - Let’s find the most recent backup we have in the backup area.

Let’s imagine you have production databases you wish to restore to test or development SQL Servers on Linux.

This Linux command will find the most recent backup in a backup area:

Even though we could sort on the backup file names it is best to let the operating system list the files in order. Because a file may be named with a date that is not the date the backup ran.

The pipe symbol (|) sends the output to the “head -n 1” command and that returns only the most recent file name.

I like to use capital letters for variables. Remember the back ticks execute the code.

Tip: Make sure you have no spaces around the equals sign when you set a variable.

The basename command gets only the file name not the path.

Step 3 - Copy the backup to the standard location

The sudo command will ask for our password then copy the source file to the standard SQL Server backup location.

And if that location does not exist you will need to create it, but only once.

Step 4 - Use the Linux variables and track what we do.

SQL Server keeps records in msdb, see this tip to track backups we have restored.

And now we can use Linux variables in a T-SQL script.

If it helps your work flow, first check to see if we have already loaded that backup. If a file has not been restored we restore it.

Well done. We have automated a recovery.

Let’s list the full script and think: How can we improve it?

Where can we automate? What about any place we have the database name?

If we replace the database name with another variable we can restore any, non-system, database.

The same script with more automation. The $1 variable below means the first argument supplied to the script.

Notice that the database file names in the database backup will need to be named Admin and the log file name Admin_Log for this script to work. If you have simple two file databases (i.e. database and transaction log) that were created with the default naming then it will work. Databases with more than two files will require extra scripting on your part.

This, more automated, script is run by:

And if we want to load many databases we can use several commands.

In each case the $1 variable holds the first parameter.

The variable $1 will hold the database name provided on the command line at the time you run the script.

Note: the databases are restored, but user logins may still need to be repaired.

You possibly will be restoring production databases to test and development servers. In that case automating the user security would be a good idea.

Let’s build a simple script to do that. The usage would be:

Here is the full script.

I suggest that you use the SQL Server Agent to automate the backup task.

The SQL Server Agent is available on Unix.

Here are more tips on SQL Server on Linux.

Tip: Sometimes we spend a long time creating an automation tool. If you forget you created, debugged, tested and used it then you lose the efficiency gained by automation. A tip to help you remember is to create some system to remind you.

Add this command to the bottom of your ~/.bashrc file.

Reminder Tip #2 - A Wiki page entry, a summary page or something like this register.