I often see people struggle with logic related to datetime range and interval queries. A common example is trying to determine if two events overlap, either fully or partially. Given an event that happens, did another event happen to cross that window in any way?

There are six different logical scenarios where two events could potentially be deemed to overlap, and many of the queries I see out in the wild treat all six of these scenarios separately. Only four of those scenarios might/can overlap. And when you boil it down, all four scenarios can be captured in two conditions. In this tip I'm going to show the six scenarios, and why two conditions capture all four of the actual overlapping scenarios.

But we can express it simpler than that, because all of these scenarios share two facts in common: Event2 finished after Event1 started *and* Event2 started before Event1 ended. Again, represented on a diagram: 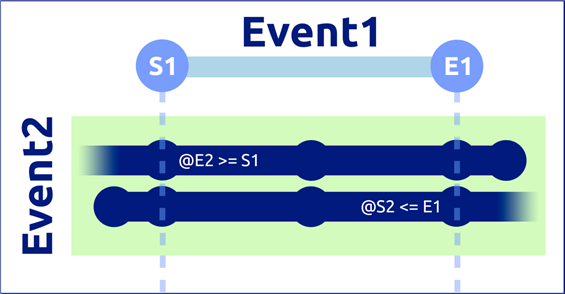 All that really matters is that Event2 ends at the same time or after the start of Event1 – it doesn't matter if it ends on the early boundary, inside, on the later boundary, or after. Similarly, Event2 needs to start before or when Event1 ends – it doesn't matter if it starts before Event2, on the early boundary, inside, or on the later boundary.

This simplifies the logic to:

Now, how can we use this logic? Let's say we have a 5-minute period of high CPU activity, and we know that several backups took place around the same time, but we're not sure if they overlap.

We can check this by using the following:

We can also do the inverse, and use this logic to ensure that an event does *not* take place inside the windows of existing events. Let's say we have a table full of training classes, and we want to book a new training class. We need to ensure that, before we create this new class, there aren't any existing classes that will conflict.

I could change the logic around to avoid NOT EXISTS but, like DST and time zones, the fewer curveballs I throw myself, the better.

Solving for overlapping windows can be a challenging problem in any language. I hope the illustrations above help you see the problem space in a different way.