I heard about user context switching and user impersonation in SQL Server stored procedures, but I am not sure how to use them.  Please briefly explain top-line issues for implementing these features.  Also, provide some code walk-throughs demonstrating the use of these features for evaluating security settings versus data access through select statements contrasted with stored procedures.

Context switching refers to modifying the context in which code operates from one user to another.  The same code can function differently across user contexts because database role memberships and permissions may differ between users.  The Execute As statement in T-SQL can implement context switching.  Each freshly implemented Execute As statement adds a new user context to a user context stack.  You can move back in the context stack by implementing a revert statement. You can get more detail on using Execute As from this Microsoft Docs page.  Additionally, this prior MSSQLTips.com tip drills down on how to use Execute As from inside a stored procedure.

At a top-line level, the differences between the Execute As statement and the impersonate permission are these.

SQL Server DBAs can use context switching and impersonate permission features to evaluate the capabilities of users with different security settings.  For example, an intermediate or senior DBA can switch contexts from one user to another to assess which security settings give the right trade-off between user capabilities and appropriate security.

The following script demonstrates the setup of a test workbench for evaluating security settings.  This script is meant to operate in the context of a login, such as a sysadmin role member, who can create login and user accounts, custom roles, and assign database permissions.

The last two select statements in the following script are for monitoring user accounts and permissions.

The following script demonstrates the syntax for the basics of user context switching with the Execute As statement.  The script is meant to run after the preceding script that creates several logins and associated database users along with a custom role, as well as selected role and permission assignments; these collectively compose a security workbench to be tested.  You will learn the basics of how to implement user context switching as well as how to recover from an error.  One purpose for a script like the one in this section is to evaluate different security settings.  For example, you can answer questions like: does your security versus functionality requirements call for a user like user2, user3, or something else altogether?

The following screen shot displays the results set from the preceding script.  The bullets below summarize the operation of the script via a review of the output from the script. 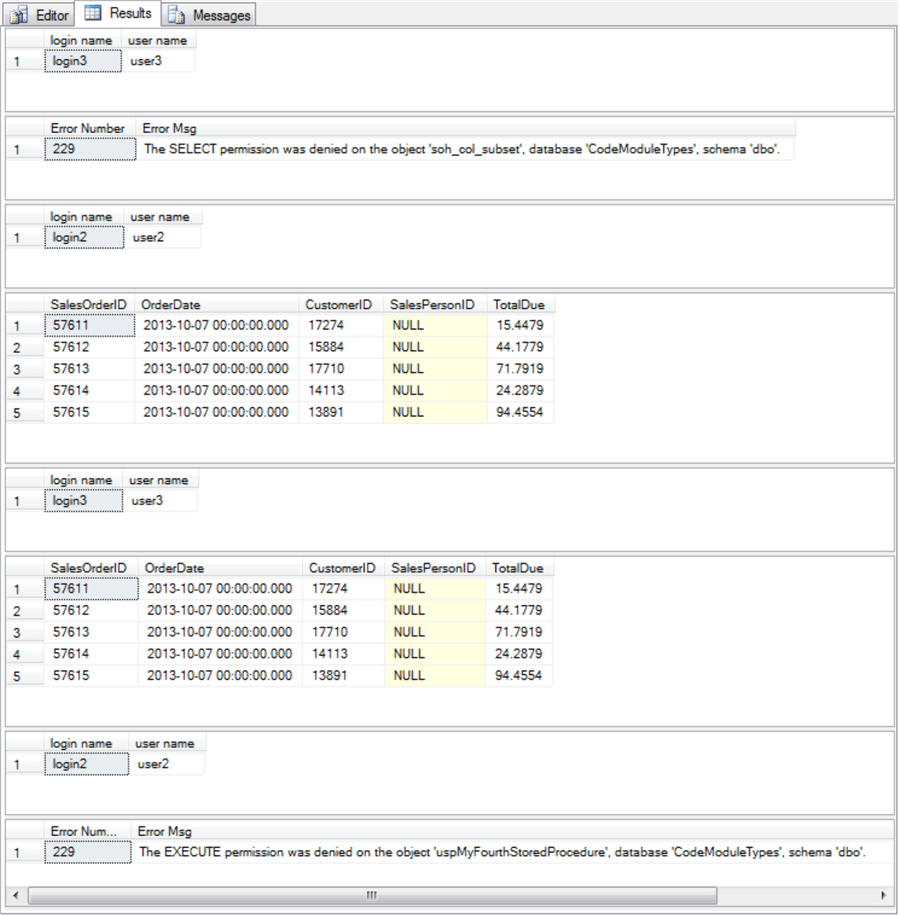 Restoring from a script with test accounts and permissions

After running code for evaluating security with context switching, it is very useful for you to restore your database to its status before setting up and/or even modifying a test workbench.  Without the removal of workbench settings, you are very likely to incur conflicts for objects that you may want to create or use differently in other subsequent workbench tests.  The following script shows an approach to this task within the context of the current tip.  Notice that the most granular security settings are removed first, such as the impersonate permission for user3 and the Execute permission for the proc_executor role.  The last objects to be removed are logins.

Getting started with Stored Procedures in SQL Server