In my work I sometimes need to import csv files and one column of the csv file is an alphanumeric string, with values like the following:

Once the data is loaded into a table, the values will be presented in a report, where the column [Code] needs to be sorted as follows. Each numeric part of the file has significance, so they data needs to sort as follows:

Using an ORDER BY in SQL Server will give the following results which is not the same as above:

How can this be done with T-SQL?

When sorting alphanumeric strings, we will extract all numbers and have two types of strings:

Let's see this in T-SQL.

This is NOT what we want, we want the following result set instead when we use "order by a asc", because the second set of numeric values are "2" and "10" and "2" should come before "10".

Our sorting rule will be such that when in comparison, all alphanumeric strings will be decomposed into S strings and N strings in their original sequence, and if S strings are the same, then the N strings need to be compared and we will compare the numeric values of N strings.

Now let's look at a simple comparison of the following two strings:

According to our rule, if we sort the two string in ascending order, we should have this, but this is not possible in T-SQL in its natural way.

If the strings are like this, then when we use the order by clause in T-SQL to get the desired results:

The demo T-SQL code is as follows:

So the algorithm to make "10.abc" and "2.abc" strings to be in the order expected via T-SQL can be designed as follows.

For example, if we have an alphanumeric string like the following:

This is like standardizing all strings for comparison, and once all strings are "standardized", we can sort the strings to get the expected result.

So the key here is to come up with a solution to standardize all source strings. I created a user defined function (UDF), it will accept three parameters:

Here is the UDF, it will search through the source string @src, and pad specified letter @letter to the left of N string to make the final N string to be of length = @plen.

The key details of the algorithm is described as below:

Test the User Defined Function to Order Numbers within a String

We will use the data below and do the sorting test. Here is the code to create the sample data:

If we do a query with order by [code] asc:

We get the following result, which is not what we want: 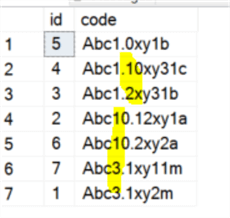 However if we do the following (computed column [Formatted_Code] is added for viewing converted data, but can be omitted):

We can see the column [Code] is ordered the way we want. 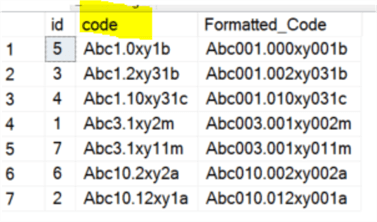 We can modify the query to the following (i.e. getting rid of the [Formatted_Code] column):

and we get the following which is the result we want: 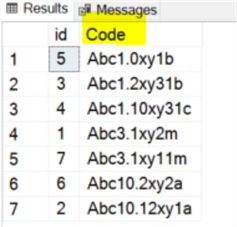 In this tip, we discussed how to order numeric values within alphanumeric strings using T-SQL, this technique is obviously not very efficient because the function needs to process the string value of each row in an internal loop, so when a table has millions of rows, this method will be very time-consuming.

But this alphanumeric string ordering is critical in some DBA daily operations, such as when we have multiple scripts stored in multiple folders, and the script names or folder names contain alphanumeric strings to indicate the execution sequence of each script. So ordering these scripts by full names (i.e. path + file name) for deployment is the first step for a successful deployment.

To improve the function mentioned in the tip, it is better to use a Regular Expression to find and extract numbers in a string. However, SQL Server T-SQL currently does not support Regular Expression, so we may implement a CLR function to utilize the powerful RegEx capability in T-SQL and this will surely improve the performance of our current T-SQL version function.

Please read the following related articles and share your own ideas about alphanumeric string sorting in T-SQL.