Our agency has a number of SQL Server databases for which mirroring was implemented a couple of years ago. When I looked at the endpoints, I noticed that they are using the RC4 encryption algorithm. While reading about endpoints I found out that RC4 is being deprecated in future versions of SQL Server and has a number of vulnerabilities. I would like to modify the algorithm being used, but cannot afford much downtime to drop and re-create mirroring and am unfamiliar with the Transact-SQL statements needed to make the change. Can you help me out with this?

Thankfully, there is a way of modifying the algorithm without having to drop it all and start over. In recent years, a number of vulnerabilities have been uncovered, making the RC4 algorithm a sub-optimal choice for encryption. This is particularly true if your institution is dealing with healthcare or other data that requires as strong of an encryption algorithm as possible during transit. At the time database mirroring was originally implemented, information about the vulnerabilities associated with the RC4 algorithm were not known. The Advanced Encryption Standard (AES), also called Rijndael, is the strongest algorithm available in the SQL Server encryption suite for transport security and should be used instead of RC4. The first thing that should be done is to confirm which endpoint(s) are using the RC4 algorithm:

Once you find the endpoint(s) you would like to modify, the next step is to pause mirroring. How you do this depends on the number of databases being mirrored. If there is just one database then you can issue a one-line SQL statement:

Once the new endpoint is created on the PRIMARY, MIRROR, and WITNESS (if applicable but preferable) instances, you can resume mirroring by issuing the following statement:

To confirm that the database mirroring has resumed and that no errors occurred check SQL Server Management Studio and the SQL Server error logs: 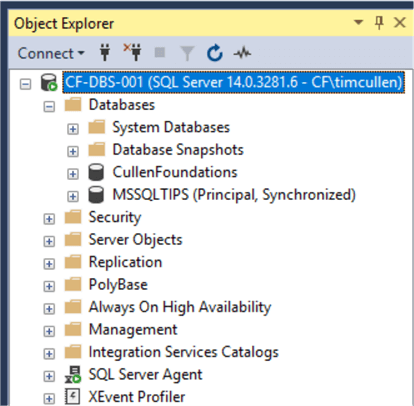 How to move database files of a Mirrored SQL Server Database