I am the SQL Server Database Administrator for an organization whose Active Directory structure now includes a forest with multiple domains. A number of users from the new domains mentioned that they are receiving errors when accessing web application that displays data from one of our SQL instances "Login failed for user 'NT AUTHORITY\ANONYMOUS LOGON". The Active Directory administrator checked the trust between the domains and each trusts the other. We set up constrained delegation after reading the tip on Understanding When SQL Server Kerberos Delegation is Needed when there was only one domain and all has been working well for those users. We want to continue using Kerberos for authentication to the SQL instance. What other options are available to us for cross-domain authentication? 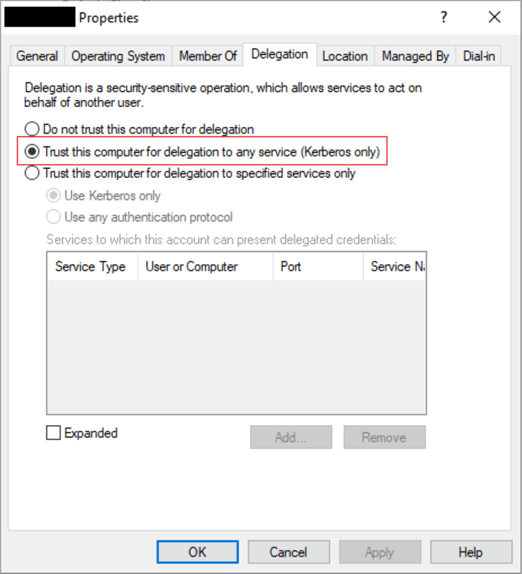 In Windows 2003 a new delegation type was introduced-constrained delegation. With this delegation type, delegation is created in each direction (i.e., between the web server and SQL instance and vice-versa) and is based on Service Principal Names. Service Principal Names can be registered either manually by someone with permission to change the Active Directory account running the SQL Server service, or by the service account itself if it is given the correct permissions. Constrained delegations must be created by an account with at least domain admin privileges. One of the limiting factors with constrained delegations is that it will only work for a single domain, and the fact that there might be a parent-to-child relationship and trust between domains, like in a forest, does not matter. So, if there are multiple domains in your forest then you would likely have to enable unconstrained delegation on at least two Active Directory accounts for a web application to work. That is, until Windows 2012 was introduced.

Resource-Based Kerberos Constrained Delegation (what my agency calls "RBKCD") was introduced in Windows 2012 and is a way of getting Kerberos authentication to work in a web application for users from multiple domains in a forest. There are a number of benefits to using this delegation type:

Below is an example of a PowerShell script that can be used to find RBKCD entries for a user, which calls the Get-ADUser function:

In order to create a RBKCD entry using PowerShell, objects representing both the SQL Server and application pool account should be created by calling the Get-ADUser function for each, then call the Set-ADUser function to create the entry itself, setting the value of PrincipalsAllowedToDelegateToAccount for the SQL Server account to the application pool account:

To clear the RBKCD entries for an account, the Set-ADUser function should be used, setting the PrincipalsAllowedToDelegateToAccount to NULL ($null):

RBKCD entries do not appear in the Active Directory Users and Computers applet/Delegations tab. The only place, other than using PowerShell, where the entries could be viewed is ADSI Edit: 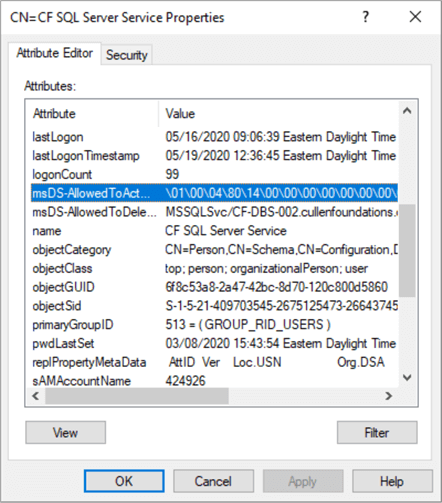 Unfortunately, an error will be returned if an attempt is made to open the setting because the data type of RBKCD entries is NT Security Descriptor: 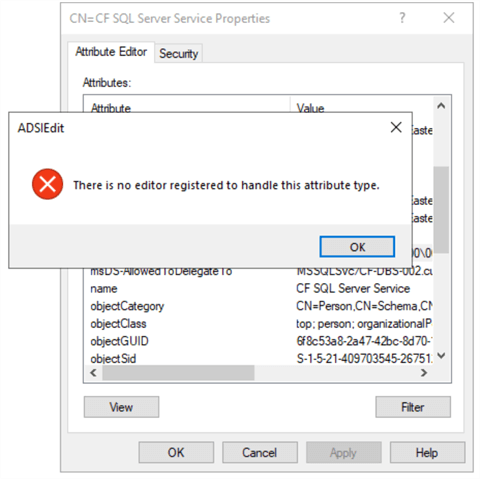