The topic of this part is about ranking functions. They were introduced in SQL Server 2005. ROW_NUMBER is also a ranking function, but it has already been covered extensively in the previous part of this tutorial.

In contrast with the ROW_NUMBER function, RANK and DENSE_RANK don’t have to generate unique numbers. The difference between all these functions is how they handle ties.

Let’s illustrate with an example. Suppose we have the following sample values: 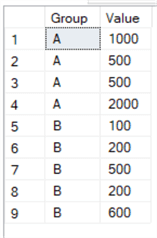 We can write the following query to test the three ranking functions:

This gives us this result set: 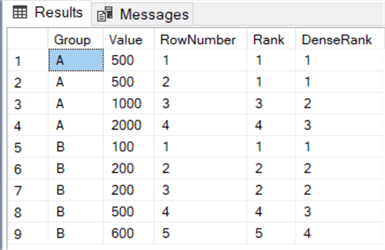 As you can see, RANK will return the same rank for ties. However, the next rank in group A is the number 3, omitting rank 2. DENSE_RANK on the other hand doesn’t skip rank 2. When there are no ties in the record set, all three ranking functions return the exact same result.

With ROW_NUMBER and RANK, we can create an alternative construct to detect duplicate rows. With the same sample data used in part 5 of this tutorial, we can create the following query to find all rows that have a duplicate business key:

Now we only need to filter on records where the generated row number (RID) is different from the rank (RankID). This will return a record for Bob, so we know there’s a duplicate record for that employee.

When to use RANK or DENSE_RANK?

As specified before, RANK can have gaps in the sequence and DENSE_RANK doesn’t. Suppose you have the task to find the top 5 customers according to sales value. With RANK, you can rank your customers and then filter out any customers with a rank bigger than 5. If you would do the same with DENSE_RANK, you might end up with more than 6 customers!

Suppose we have this set of data about our customers: 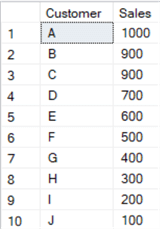 When adding ranks with RANK and DENSE_RANK, we have the following data set: 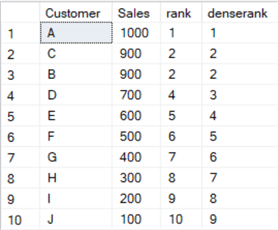 When filtering on rank <= 5, you’ll get exactly 5 rows returned. However, if you filter on denserank <= 5, you’ll get 6 rows, which might not be what you want. The more ties, the more rows DENSE_RANK can return. If the tie would be on exactly row number 5, the RANK function would also return 6 rows. In that case, you need to “break the tie”. You can do this by using the ROW_NUMBER function or by sorting on additional column.

The last ranking function is a bit special. NTILE divides the rows in roughly equal sized buckets. Suppose you have 20 rows and you specify NTILE(2). This will give you 2 buckets with 10 rows each. When using NTILE(3), you get 2 buckets with 7 rows and 1 bucket with 6 rows.

Let’s reuse the query from the previous section, but add an expression using NTILE:

We get the following results: 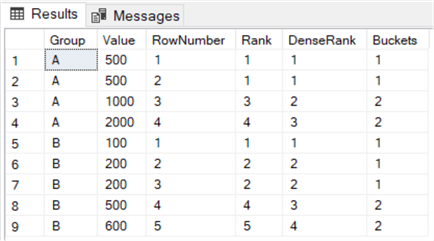 An example where NTILE was used to divide data into buckets is described in the tip How to create a heat map graph in SQL Server Reporting Services 2016.