SQL Server introduced four new ranking functions either to rank records in a result-set or to rank records within groups of records of a result-set. With these new functions, we are no longer required to write several lines of code to get ranking data. It does not only help in simplifying the query but also improves the performance of the query. So now the questions are: what are these ranking functions, how they work and how they differ from each others?

In my last tip (Ranking Functions in SQL Server 2005 and 2008 - Part 1) of this series I discussed the ROW_NUMBER and RANK ranking functions. In this tip, I am going to discuss the DENSE_RANK and NTILE ranking functions, how they work and how they differ from each other. 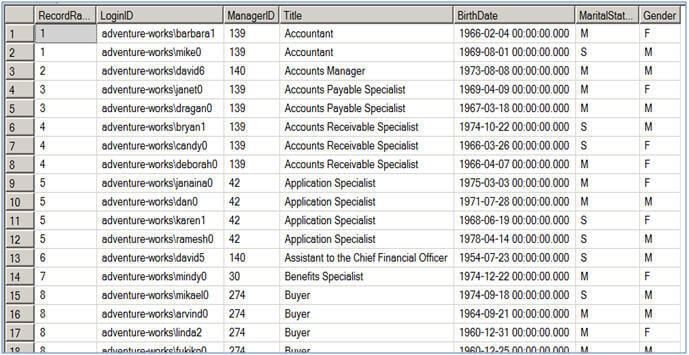 The NTILE function differs from other ranking functions in terms of how it breaks the result-set or partitions (groups of records) into specified number of sub-partitions (sub-groups of records). For each row in the sub partition (sub group) it returns the number of the sub partition (sub group) in which the row falls. If the NTILE can not divide the rows evenly to the specified number of sub groups, then larger sub groups will come before smaller groups. For example, lets assume you have 11 records in a table and you use NTILE with parameter value of 2, then NTILE will divide rows into two sub-groups. The first sub group will have 6 records whereas the second sub group will have 5 records only.

The syntax of NTILE also differs in terms of how it accepts a positive integer (of type int or bigint) constant expression that specifies the number of sub partitions (sub groups) into which each partition (group of records) must be divided.

With Common Table Expression you basically create a derived table which is available within the scope of a single, SELECT, INSERT, UPDATE, DELETE or MERGE statement. It helps you to simplify the process of achieving the same goal for which you had to write complex/recursive queries in prior versions of SQL Server. Many times you might be required to use ranking functions along with a CTE. For example you can combine these two commands to delete duplicate records from a table with just one query. Refer "Different strategies for removing duplicate records in SQL Server" for more details. For details about Common Table Expressions on msdn, click here.