This article is ideally suited to SQL Server developers and those data professionals wishing to know more about SQL Server functions, and wanting to get a greater understanding of which functions are available and how they can help improve the efficiency and facility of SQL routines. Using system functions can help remove unwanted inefficiencies in code, such as loops, nested loops and string-based field manipulation. The functions available in SQL Server can tie in well with business logic, enabling the developer to write better-suited algorithms to support business requirements.

Rather than give an overview of all system functions, this article will walk through three several little-used functions in SQL Server - one for statistical aggregation (VARP), one for English phonics (SOUNDEX), and one for ranking and grouping (NTILE). It will also provide an overview of the RANK and DENSE_RANK functionality to complement the exploration of NTILE. Hopefully by seeing how useful just a few functions can be, this article will encourage you to find out more about system functions in SQL Server, and at the bottom of the article are a number of links to the Books Online documentation on non-user-defined functions.

As every data professional knows, some functions are used far more than others - commonly SUM and COUNT. However SQL Server ships with a wide variety of different functions, and these can be used in many different contexts. For those of you of a mathematical or statistical persuasion, it may interest you to know that SQL Server supports a wide variety of statistical aggregation and calculation functions, together with a number of mathematical and algebraic functions that can assist in, for example finance calculations, often taking the place of more complex and inefficient code.

Consider the following example to calculate the variance of a set of temperature values. Here we first define a test table with some temperature readings taken on different occasions for some major cities:

Let us now say that we wish to compute the average deviation from the mean for each city in our test table. That is, we wish to find out how far away from the average, on average, each temperature reading is within the appropriate category (location). However, we cannot simply calculate the deviation by taking each reading and subtracting or adding the mean, since this will give us a range of values that are mixed positive and negative and by definition will cancel each other out. We must instead use a different method of measuring the deviation. There are three commonly used - absolute deviation, which is the deviation from the mean with the sign (minus or plus) disregarded; the variance, in which each deviation is squared to obtain a positive number (be aware that -x^2 = x^2 for all positive natural numbers x in X) - and standard deviation, which is simply defined as the average deviation, as computed by variance (in other words, the square root of the variance).

So to be more precise, variance, mathematically, is defined as the sum of the squared distances of each member of a set of numbers from the mean (average) of that set of numbers, divided by the number of members. So, in the example above, we might wish to know the mean temperature in Moscow based on the information available, and the variance of this set of data as our chosen measure of variation in temperature. Because of the peculiarity of my example having a set of data spread across columns rather than in a single column, we have an opportunity to first UNPIVOT the data then use AVG and VARP to get this information, like so:

As you can see from this result, it might be better to use STDEV (or STDEVP) to gain a more accurate measure of the true variance, as 39.03 is clearly a poor figure to indicate variance in degrees Celsius, since it exceeds the range of values. In statistics, for precisely this reason, standard deviation is the preferred variance measure as the square root of the variance provides a linear relationship instead of an exponential one. It's worth noting that SQL Server exhibits some odd behavior here - although SQRT(VARP(expression)) is logically equivalent to STDEVP(expression), interestingly and I suspect due to rounding, truncation or arithmetic errors to do with SQRT, the two values are NOT identical when computed in SQL Server - they vary by a small amount.

Variance still has its uses in mathematical circles, for example when working out the total variance of uncorrelated variables, and other matters familiar to those versed in discrete probability theory. For example, one may wish to identify statistical outliers in the temperature information given - if we had a hundred different readings and knew that the typical verified variance is approximately 39deg for Moscow, any figure significantly different from this would raise alarm bells. Standard deviation would not do, since the differences are linear and may be missed when statistically aggregating the individual variances as the difference between the expected and actual standard deviations would be too small - whereas the exponential nature of variance, obtained using VARP, would quickly distort the 39deg figure into an unlikely number, rendering it identifiable to the statistical researcher.

Moving away from statistics, the SOUNDEX function is an interesting example of a function that exclusively implements a third-party specification, a proprietary algorithm developed and patented privately nearly a hundred years ago. SOUNDEX is a function built by Microsoft to a precise algorithmic specification. The Soundex specification is designed for use in systems where words need to be grouped by phonic sound rather than by spelling - for example, in ancestry and genealogy, the surnames Smith, Smyth and Smithe are spelled differently but could be pronounced the same. It is important for users of expert systems that deal in phonics to be able to recognize these similarities without complex and inefficient rule based systems to slow down the storage and retrieval process.

A good use of Soundex could be to assist in the automatic detection of fraud. Some time ago, I used to work as a database administrator for a small company specializing in the provision of online gambling to US customers. This company would use a number of weighted measures built as stored procedures which would take many different factors, from postcode to IP address to demographic, to make an intelligent decision on whether a new customer signup was likely a duplicate of an existing account, in order to help prevent fraud. Although SOUNDEX wasn't used in this context, there would have been a strong case for inclusion as a fuzzy matching algorithm to determine the similarity of the 'John Smith's to the 'Johann Smythe's.

In summary, Soundex is a specification originally designed in 1918 by Robert C. Russell and Margaret Odell, and has risen to prominence in a number of database specifications as a preferred system for categorizing and relating phonics. For the history of Soundex and for a more detailed description of the variants in use today, see the links at the bottom of the page for more information.

We could implement a SOUNDEX-based system to identify similarly-sounding names and write a stored procedure which will identify customer records based on matching phonics. Here's a brief example of how it could work. Below is the build code to generate a table with customer ID, surname and SOUNDEX code for 1000 common surnames (you can find the list attached to this article as sample_name_data.txt):

Now you could write a stored procedure to find names with similar sounds, like so:

As you can see, with some development a powerful phonics comparison system can easily be built.

The final section of this article will deal with ranking functions, which includes the RANK, DENSE_RANK and NTILE functions and in the author's humble opinion, underused in most SQL Server database implementations. As a database administrator, much of my job involves reviewing and correcting code, examining existing SQL schemas, procedures and functions, and improving performance wherever possible. Given the usefulness of RANK, DENSE_RANK and NTILE, I am surprised that (at least in my experience) ranking functions are not used more often.

I have included the table build code below for your convenience:

Consider the following (fictional) horrible and inefficient piece of code to rank customers in a table by £ (or $) amount gambled.

As you can see, this is inefficient and bulky. It pre-separates out the source data into the distinct classes, orders the contents of those classes by TotalDeposited, and glues them back together in a results table. The output is identical to this slimline version using RANK():

As you can see, this is easier to read. It doesn't use a cursor and the sorting and ordering are taken care of internally. If you're unused to ranking functions, note that PARTITION BY x means 'partition each set of ranks by distinct x' and ORDER BY x determines the order in which the values must be ranked. So in the example above, PARTITION BY CustomerClass means 'return ranks from 1 to N for each distinct class (gold, silver, bronze)' and ORDER BY TotalDeposited DESC means '... and the ranking should run from largest to smallest.'

DENSE_RANK is the second main ranking function and is similar to RANK except that gaps in the ranking are not allowed. In essence, when there is a tie-break in the conditions for the RANK then the ranking 'skips' one value and continues on. DENSE_RANK does not do this but continues immediately after the tie. This is illustrated by adding another line to our example:

This will insert another row with the TotalDeposited value at 20.00, which means it will tie-break with the row with CustomerID 5434 as seen below:

We can avoid this by using DENSE_RANK as follows: 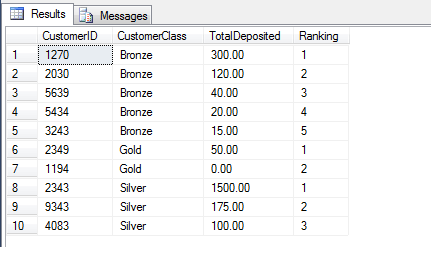 This brings us nicely onto NTILE. Think of NTILE as 'N'-TILE where N refers to the 'segments' of the whole, in the same sense of the words QUARTile or PERCENTile. This is how to use it: 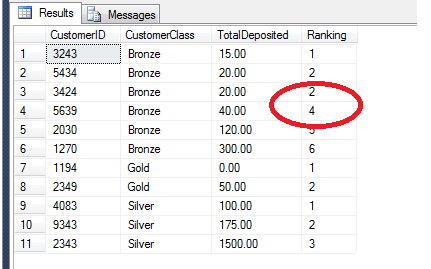 In the above example, we have taken all values irrespective of player class and returned them in the specified order, arranged into evenly-distributed groups. We may therefore use this data to say, 'Players 1194, 3243 and 5434 are in the top 25% of players who have contributed the most money to our enterprise'. This function is very useful when e.g. computing performance on a bell curve (evenly-distributed curve). The definition according to BOL may make more sense here:

'Distributes the rows in an ordered partition into a specified number of groups. The groups are numbered, starting at one. For each row, NTILE returns the number of the group to which the row belongs.' - http://msdn.microsoft.com/en-us/library/ms175126.aspx

NTILE can therefore be useful when, for example, creating procedures that execute groups of statements in batch, or when you wish to aggregate financial figures.

I hope this short article has given you inspiration to check out some of the other 'forgotten' functions of SQL Server. Below you'll find a list of links to related resources, including the BOL articles from Microsoft on ranking functions, and other articles covering similar topics. Please feel free to leave comments, good or bad, below, and I'll try to respond as soon as possible.