Enough with the theory, let’s get our hands dirty.

In this part of the tutorial, we’ll see some different methods for creating database objects. If you’re have some experience with SQL Server, most of the DDL will seem very familiar.

With the following DDL statement we can create a new database in Snowflake:

If the database already exists, it will be removed and a new database with the name TEST will be created. A more prudent way of creating a database can be done with the IF NOT EXISTS syntax:

This will only create the database if it doesn’t exist yet. The “OR REPLACE” and “IF NOT EXISTS” syntax can be used on most database objects.

Like in SQL Server, objects can be grouped together using schemas. If you want good code portability between Snowflake and SQL Server, it might not be a bad idea to create a schema called DBO:

By default, every database has also the schemas PUBLIC and INFORMATION_SCHEMA. In the latter you can find metadata information about the tables and columns of the database (such as the names, data types et cetera). 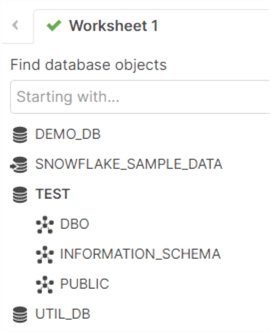 Now we can create a table as well. Again, the syntax is very familiar.

A couple notes about data types:

Sometimes you want to create a copy of an existing database object. For example for back-up purposes or for deploying the object from one environment to another. If you want to keep the data, the CLONE feature is very powerful. It creates a zero-copy clone of the original object, meaning it’s a metadata-only operation, the data itself is not clones. Only pointers are created, but the cloned object is updateable and can be changed at will. This is similar to SQL Server’s database snapshots, except that database snapshots are read-only.

Suppose we put some data in the table we created earlier.

When we issue the following statement, a clone of this table is created, with all the data in it: 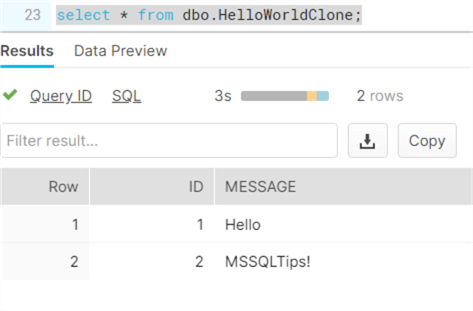 If you don’t want to keep the data, you can use the LIKE feature: 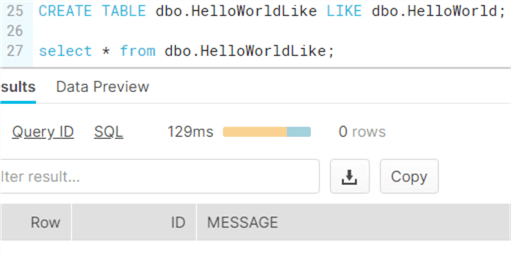