Describing every feature in Snowflake is impossible in the scope of this tutorial. But in this part, we’ll highlight some of the features – or interesting SQL syntax – which might be useful to you, especially if there’s no counterpart in SQL Server.

The first feature is a bit of convenient SQL syntax, which is not available in SQL Server at the moment. When you write a query, you can assign a column alias to an expression. In Snowflake, you can re-use that alias in the same query. Let’s illustrate with an example. Using the sample table from the time travel part of the tutorial, we can write the following SELECT statement:

In this SQL query, the MyAlias query is re-used in another column expression and in the WHERE clause. In Snowflake, you can re-use an alias in the GROUP BY and HAVING clause as well. There are some restrictions though: you cannot re-use an alias in a window function, there mustn’t be conflicts with an original column of one of the tables and the alias has to be defined before you re-use it somewhere else. Regarding the last point, the following SQL statement will give an error:

If you want a similar feature in SQL Server, you can vote for the idea.

By default Snowflake is case sensitive. When you write a SELECT statement using LIKE in the WHERE clause, this is something you need to take into account. Otherwise you might not get the result you want. Luckily there’s the ILIKE clause, which has the exact same functionality as LIKE, but it ignores any casing. Let’s create a sample table to illustrate.

Using the normal LIKE clause, we only get one row returned when we search for MSSQLTips: 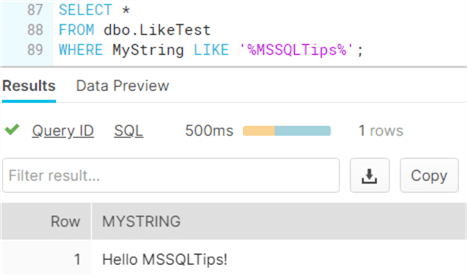 When we use ILIKE instead, all three rows are returned: 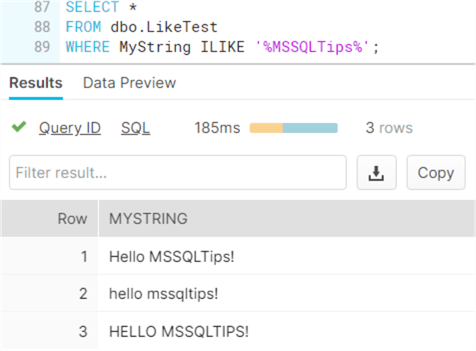 In Snowflake, we can for example use the function RLIKE, which is similar to LIKE but with regular expressions. Suppose we want to search in our sample table only strings that are uppercase only (including spaces and the exclamation mark). We can write the following SELECT statement: 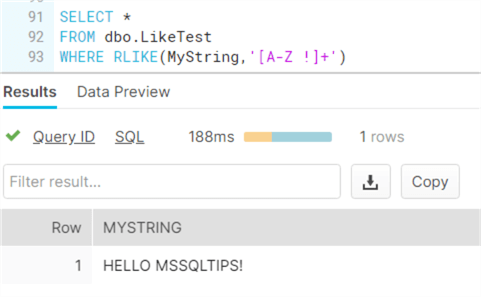 Suppose we have a table with a nullable column. For each row, we want to find the previous value. This can easily be accomplished with LAG. However, suppose that if the value returned is NULL, we want the value of the row before and if that one is NULL, the row before and so on until we find a value that is not NULL. Suppose we have the following table:

We want to retrieve the following result set: 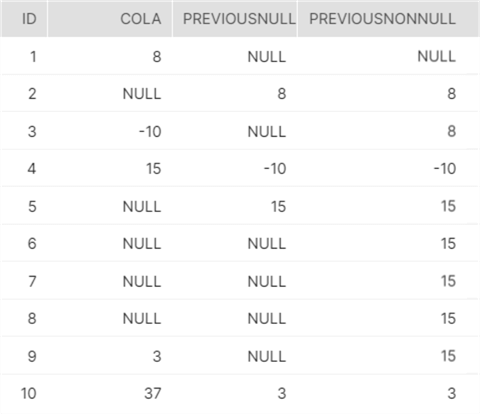 The PREVIOUSNULL column is the result we get with using the standard LAG function. The PREVIOUSNONNULL column holds the values we want to calculate. There are no NULL values, except for the first row because there are no previous rows. In SQL Server, the solution is not so straight forward. Itzik Ben-Gan gives a solution in this article.

In Snowflake however, the solution is quite easy. The LAG function supports the optional clause IGNORE NULLS (which is part of the SQL standard). The solution becomes:

To round up, here are some other features that might deserve your attention: