Problem
When you send e-mail to large lists, validating the e-mail addresses before sending out the e-mail is worth doing to prevent having mail rejection messages clog up your mail server.  I had been doing the validation with a T-SQL User Defined Function (UDF), but it was getting too slow as the number of e-mails grew.  I needed a faster alternative, what options do I have?

Solution
While I could have improved the T-SQL in my function validating e-mail addresses, which requires a lot of string handling, T-SQL isn't the best technology for this problem. When the task at hand is one that .Net code handles better then T-SQL a SQLCLR scalar function can be a great solution. When introduced in SQL Server 2005, the SQLCLR allows stored procedures, functions, triggers, user-defined types and user-defined aggregates to be written in C#, VB.Net or C++.   I showed how to write a SQLCLR stored procedure in the tip Writing to an operating system file using the SQL Server SQLCLR.  This tip will show how to write a SQLCLR scalar function and compare it to the original T-SQL.

Although I acknowledge my T-SQL UDF is not totally optimized, in my tests of validating 10,000 email addresses the SQLCLR took 53ms and the T-SQL UDF took 14,822ms.  That is a significant improvement, so read on...

Lets take a look at the original T-SQL UDF.  Here's the code:

It's not the most efficient of code.  That's why I have to update it.

One of the features of this function is that the header comment includes a series of tests.  While these might be not be the most complete set of tests for an e-mail validation function, there the ones that I've been using for awhile.  They're easy to execute.  In SSMS, just select the text and execute the script.  It prints out a series of Passed/Failed messages about each test.  Later in the tip they'll be used to validate the new SQLCLR function.

Previous tips on the SQLCLR have shown how to create a SQLCLR project, Writing to an operating system file using the SQL Server SQLCLR, or to compile a .Net program from the command line and then load it into SQL Server CLR function to delete older backup and log files in SQL Server, so this tip will concentrate on the validation code and testing for performance differences.  I started with the existing project ns_txt and used the menu command Project/Add User-Defined Function.  I gave the function the name ns_txt_email and Visual Studio created a prototype function as shown here: 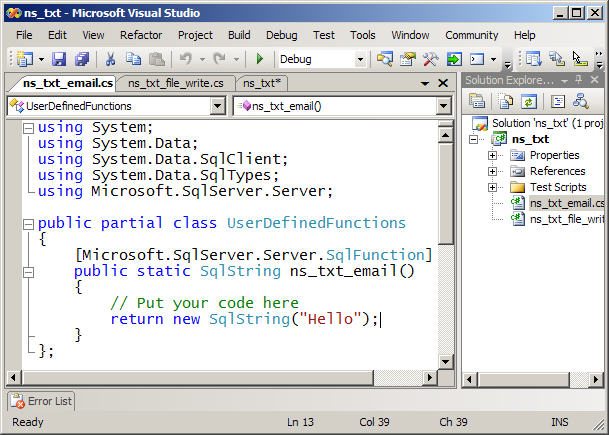 Writing the code was pretty simple, given that there was an example in the Visual Studio documentation.  There were a few steps that I needed to take:

Here's the code after I was done: 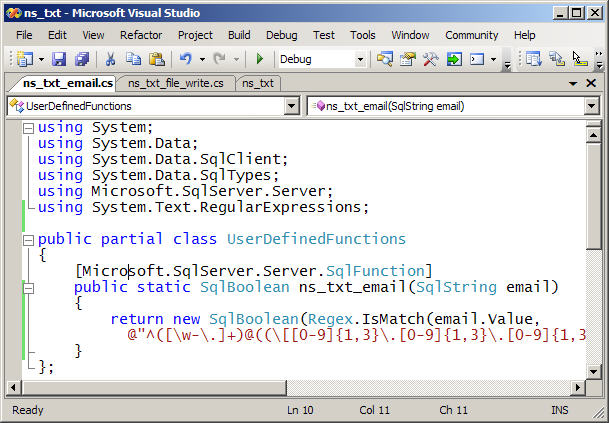 The regular expression is a long string constant that is cut off in the picture.  The full string is:

The Regex.IsMatch function returns a CLR Boolean, which is returned by the function as a SqlBoolean.  This is the type that best corresponds to the T-SQL type BIT.

The next task is to build and deploy the project and try the function.  The function ns_txt_email can be used from SSMS, but it can also be used. from Visual Studio.  For this project I decided to test by putting my tests in the Test.sql script that Visual Studio provides as part of a Database project. You can add scripts in the "Test Scripts" folder.  Execute them by right clicking on the script and choosing "Debug Script".   My test script for the SQLCLR function is here:

The output of a test script is sent to Visual Studio's Output window.  The following is the result of running the script. The results have been truncated on the right side for readability:

So the new function passes the original set of tests.

Now how about performance? Is the SQLCLR function really faster than the old T-SQL UDF?  To create some reasonable test data that anyone could use this script creates 10,000 sample e-mail addresses.  All of them should be valid.

The next script compares the performance of the two functions.  It first selects the table of temporary email address in the expectation of pulling the tables pages into memory.  The SET STATISTICS TIME ON command asks SQL Server for the elapsed and CPU times for each command.  The results are summed so that the time to return results to the client isn't a factor in the measurement.

After sending the results to the Text Results window and ignoring the list of sample e-mails the results are:

The CPU time for the SQLCLR is only 47 milliseconds compared to 6.187 seconds for the T-SQL UDF. The SQLCLR function is 131 times faster, a dramatic difference.  I'm sure that I could improve the T-SQL a lot to make it faster, but I doubt that the T-SQL UDF is ever going to get close.  At least in this case SQLCLR can be dramatically faster in terms of CPU and the difference in elapsed time is even larger.

T-SQL functions that handle strings are candidates for replacement with SQLCLR functions.  That's especially true of validation functions, such as udf_txt_IsEmail, due to the availability of the regular expression feature in .Net.  If a function is dragging your performance down, consider replacing it with a similar SQLCLR UDF.