SQL Server 2005 supports Database Instant File Initialization which skips zeroing out data pages that can reduce the time when performing operations like creating databases, adding files to an existing database, increasing the size of an existing database file manually or thru autogrowth or restoring a database or filegroup. But how do we make sure that SQL Server is using this feature?

In previous versions of SQL Server, data and log files are first initialized by filling the files with zeros when you perform one of the previously mentioned operations. This is very critical in disaster recovery and restore operations especially when dealing with very large databases.

With SQL Server 2005, instant file initialization is introduced. What this does is it skips the zeroing out of the data on disk, thereby, not overwriting the previous data written on the disk. The operating system just allocates the disk space, but the contents of the file is actually what is originally on the disk. This feature is available on all editions of SQL Server 2005 running on Windows Server 2003 or Windows XP on an NTFS file system. 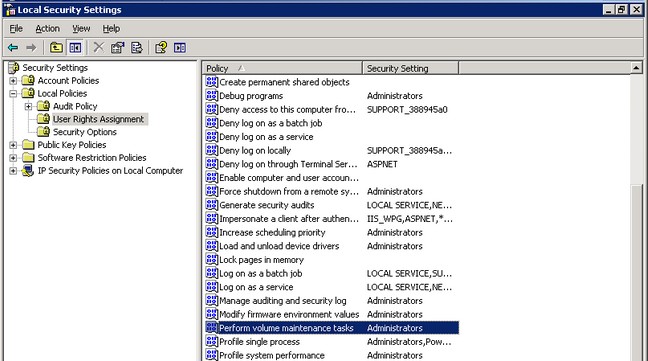 Note that this is only applicable to data files and not log files so if you have a large transaction log file as part of your database backups, the database files will be created instantaneously but not the log files. They have to be zeroed out first before being written to disk.

Even though this improves file increase performance on autogrow events, this should not be used as a substitute for properly sizing your database files to minimize, if not prevent, autogrowth. Also, if you give this permission to the service account while the SQL Server service is running, you have to stop and restart the service in order for the feature to take effect. You can also run the command gpupdate /force to apply the modification in the security policy immediately.

There is also a security risk to doing this. There is a possibility of accessing the non-zeroed data on disk by an unauthorized account. Imagine a dropped database whose data file has not been zeroed out on disk. Any user can access the data if no discretionary access control list (DACL) is defined on the file since the DACL is only applied while the database files are being used by SQL Server. If the potential for disclosing deleted content is a concern, it is recommended that you explicitly apply restrictive DACLs on your database files and backups when they are detached to SQL Server. A good discussion of the security implications of instant file initialization is available on Microsoft's physical database storage design site.