Microsoft provides a good set of basic queries into their system tables. However, some of these procedures lack some additional information that I'm interested in and I find myself constantly issuing queries to get this additional data. Is there a way I can run these queries like system procedures?

When running an sp_ prefixed procedure from master, there are some subtleties as to which database context is used, which impacts what data is returned.

Examining the output, we can see that the DB_NAME() function ran under the context of the AdventureWorks2017 database as did the SQL Server 2000 statement to retrieve the Employee table metadata from sysobjects. However, the equivalent INFORMATION_SCHEMA and SQL Server 2005 and later statements did not work and the SELECT from the Employee table failed outright. These did not work because the statements actually ran under the context of the master database. While the procedure was found in master, it wasn't smart enough to use the current database context for the SQL Server 2005 and later specific catalog information. 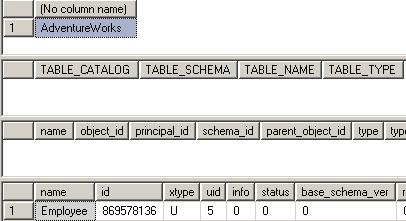 Marking our procedure with sp_ms_marksystemobject shows that it has been registered with the engine as it were a Microsoft supplied procedure. 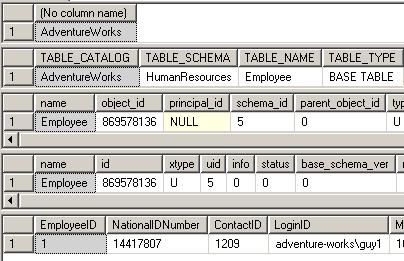 As you can see, this is a really effective way to centralize some of your frequently run queries so they're available for use against multiple databases hosted on your server. It should be noted that adding objects to the master database is not generally considered a good practice, so I don't make use of this feature on production servers. However, I do maintain several QA and Load Test servers and I make use of it in these cases.

Armando Prato has close to 30 years of industry experience and has been working with SQL Server since version 6.5.