Let's say for example there is a string 'A,B,C,D,E' and I want to split it based on the delimiter ','.

The first step would be to convert that string into XML and replace the delimiter with some start and end XML tags.

Here is what this looks like after the delimiter ',' is replaced by </X><X> tags. When you see the output after converting the string into XML, you will be able to see the string as shown in the image below:

.This will give the output as a separated string as:

Now, say I have a table that has an ID column and comma separated string data as shown below.

I can use the method shown above to split the string.

When the above is run this is the output we get: 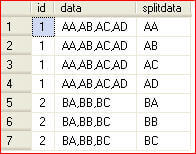 This is what is being done. First of all I cast the 'data' column of table @t into an XML data type by replacing the delimiter with starting and ending tags '<X></X>'.

I have used 'CROSS APPLY' for splitting the data. The APPLY clause lets you join a table to a table-valued-function. The APPLY clause acts like a JOIN without the ON clause and comes in two flavors: CROSS and OUTER.

This tip hopefully shows you the power of XML and the use of 'CROSS APPLY'. There are other options to split strings in a single query using recursive CTEs, but we will save that for another tip.