Problem
We are storing large text and URLs that are over 900 bytes in some of our tables and have a requirement to enforce uniqueness in those columns. But SQL Server has a limitation that index size can't be over 900 bytes. How do I enforce uniqueness in these columns and is it possible to achieve this in SQL Server 2005 and above? What are my different options to solve this problem? I heard that we can use CHECKSUM to create a hash, but is it possible to avoid collisions in the hash value as we are storing millions of rows?

Solution
In SQL Server, an unique constraint is enforced using an unique index on the column. But the index key size has a limitation of 900 bytes and this is why we can't enforce the unique constraint on columns over 900 bytes. This limitation not only applies to indexes, but also for foreign keys and primary keys as well. This 900 byte limitation is documented in the Maximum Capacity Specifications for SQL Server.

What happens if data goes over 900 bytes?

Let's take a step back and see what happens when data is added that violates the 900 bytes constraint. Using the below script, create a table with more than 900 bytes with a unique constraint. SQL Server gives us a warning about the key length and informs that future inserts and updates will fail. This is OK for now.

Now we have seen how, why and what happens when the 900 byte limit is hit.

Let's explore some options to solve this problem.

CHECKSUM to the rescue?

SQL Server has a CHECKSUM feature and it can be used to generate a hash value based on a large text column and possibly index the hash value. The hash value generated by the CHECKSUM is an INTEGER which takes up only 4 bytes and one should be able to enforce a unique constraint on the hash value. Let's give this option a try and see what happens.

Although, it seems that our problem is solved by the CHECKSUM trick, in fact its not. As noted earlier, CHECKSUM generates an INTEGER value which has only a limited range of values when compared to all possible text that can be generated. There is a higher risk to have collisions in the hash value even for distinct text values.

Let's run a test to see the risk of collisions using CHECKSUM. The below script is run in the AdventureWorks database. To have distinct values sys.objects and sys.columns are CROSS JOINed to generate 20 million records quickly.

Astonishingly, the above script generates 46,396 hash collisions for a 20 million data set.

Let's see if the hash collisions are indeed similar text or from distinct text values using the below queries. The below picture tells the story louder and clearer than any words.

We can see below that C2 is the same, but C1 is totally different. 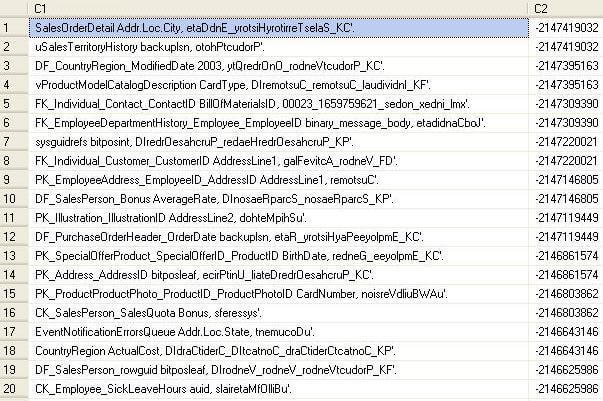 For any DBA, understanding what kind of data is supported in the system is very important and this information might be useful to solve this problem. Even though large text longer than 900 bytes is stored in the column but if the data is guaranteed to be unique within 900 bytes then one can create a computed column and apply the unique constraint on the computed column.

This technique is illustrated below.

The below script demonstrates how TRIGGERS can be used to enforce the unique constraint.

Once the above scripts are executed, we can do a dry run to test the unique constraint with the below script. While the first insert succeeds, the second script will fail. The application code should be designed in such a way to catch the error message and act accordingly.

While Triggers do the job to enforce the unique constraint effectively there is still overhead to check against the table if the value already exists in the table for every data modification. This overhead can be considerable if the table has frequent inserts and updates and the data in the table is huge.

Starting with SQL Server 2005, HASHBYTES can be used to enforce the UNIQUE constraint. HASHBYTES returns a VARBINARY value with a maximum of 8000 bytes of the input text. To use this function, an algorithm name should also be specified. SHA1 is the preferred algorithm as the chances of duplicates is very very minimal.

Compared to CHECKSUM, HASHBYTES is way better in reducing the collisions, but it still leaves the door open for collisions. The odds of duplicates though is considerably lower.

The below script generates 100 million records using a CROSS JOIN between sys.objects and sys.columns and a HASHBYTES value is generated. This VARBINARY hash value is type casted to a BIGINT so that we can index the hashed value. This indexed hash value will be useful for retrieving the data quickly and helps performance.

All companies will not have the problem of enforcing unique constraints for really long text values longer than 900 bytes, but when you have the need, its important to know all the possible solutions to the problem. While CHECKSUM alone seems like a terrible solution due to high risk of collisions, HASHBYTES seems to be the winner with less chance of duplicate hash values. It is very important to know the data and if the data is unique in 900 bytes then a computed column should be a good solution. It is also important to understand the performance overhead of using TRIGGERS to enforce the unique constraint.

Sankar Reddy is a Database Engineer/DBA and SQL Server MVP. He has been working with SQL Server since 2003 in a variety of roles.